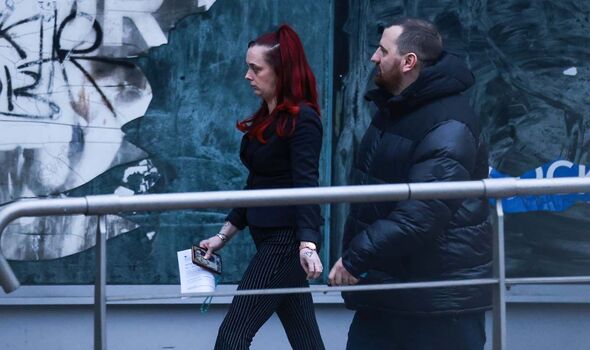 A couple have been given suspended jail sentences after their bulldog puppy starved to death in appalling conditions in their flat – after they moved half a mile away and left her behind.

The decomposing body of eight-month-old Coco was discovered at the flat in Dorset Gardens, Birkenhead, on May 12 last year surrounded by bags of rubbish and children’s toys.

The bulldog puppy had been “effectively abandoned” at the property when they moved out, with only occasional and intermittent visits to provide her with food and water, Liverpool Magistrates Court heard.

Jonathan Brookshaw, 36, and Leanne Griffiths, 33, now of Bebington Road, Birkenhead, were sentenced on Tuesday to 18 weeks in prison each, suspended for 12 months. The couple were also disqualified from keeping animals for five years following a prosecution by the RSPCA.

They had both admitted causing unnecessary suffering and failing to provide for Coco’s needs at an earlier hearing in October.

Griffiths had last been to the flat to see Coco approximately five days before she was found. The puppy, who weighed just 4.6kg, had been spending up to a week on her own unsupervised in the property with no interaction or social activity.

Magistrates were told that RSPCA inspector Anthony Joynes had been asked to attend the property by the police after officers and a local housing association had carried out a welfare check on the occupants and discovered the puppy’s body.

They heard that the inspector was met with an overwhelming smell of decomposition when he entered the flat, which had faeces on the floor in every room and pools of dried diarrhoea. Coco was found deceased in the living room, extremely underweight and appeared to have been dead for some time. Food and water bowls were empty and there was nothing in the property for her to eat.

Inspector Joynes said: “I saw a large area of dried brown liquid directly behind Coco that had patterns and paw/claw marks that suggested to me that she had been collapsed in this area, alive, for a period of time and had been moving around or attempting to get up.

“I noted that she was wearing a collar with a tag containing the name ‘Coco’ engraved onto one side. The collar was far too big, providing some indication of how big the dog may have been at some point before losing body condition, as people generally don’t put collars on their dogs that are far too big and can just slip off.”

The couple had moved out in March 2022 and moved to Bebington Road, just a short distance away. When the couple were interviewed about what had happened to Coco, Griffiths said they were unable to take the puppy with them because she would go to the toilet in the new property. She said she had last seen the puppy alive about three to four days previously and that she was “skinny but alive.”

Brookshaw said that Griffiths and another man had made arrangements to care for Coco and had told him they were both attending the property, but he admitted he “should have done more”.

A vet who gave evidence in the case said Coco had been suffering from hunger and starvation for a period of several months prior to her death. He said that, from the information provided by the defendants, she was being provided with food on an infrequent and irregular basis, which had the effect of prolonging her starvation.

“She will also have experienced periods of time where she had no access to water and will have suffered from dehydration; however she was obviously able to obtain enough water to survive based on the infrequent visits,” he said. “The environment in which Coco was housed was totally inadequate for her as it was not clean and sanitary, nor did it provide her with a clean, dry, comfortable and safe place to rest as required by the Code of Practice for the Welfare of Dogs.

“Of more concern than the poor environment is the complete lack of socialisation and companionship provided to Coco who, from the accounts given at interview, was spending up to a week at a time with no interaction or social activity at all.

“It is my expert opinion that Coco was caused to suffer from hunger, weakness and lethargy over a prolonged period of time as a result of the intermittent starvation and dehydration that she was enduring from the failure to provide her with an adequate and sufficient diet on a daily basis.”

Brookshaw and Griffiths were also ordered to complete 100 hours of unpaid work each, 15 rehabilitation activity days and pay costs of £500 costs and a victim surcharge of £128.

In mitigation, magistrates were told that the couple were remorseful about what had happened. Griffiths was said to be caring for her ill father at the time and money had also been an issue. Brookshaw’s other dog, Molly, has since been rehomed.

Speaking after the case, inspector Joynes said: “It’s hard to prepare yourself to walk in and deal with an incident where a dog has been starved to death. You know you can’t do anything to help at that stage, and all you can do is remain professional and investigate the case to ensure that the animal’s suffering does not go unanswered. It remains one of the saddest sights I’ve ever seen in 14 years, Coco just lying there dead, emaciated and alone surrounded by children’s toys and bits of rubbish, having been completely let down by the people she relied upon.”

A third defendant in the case will be sentenced in March.