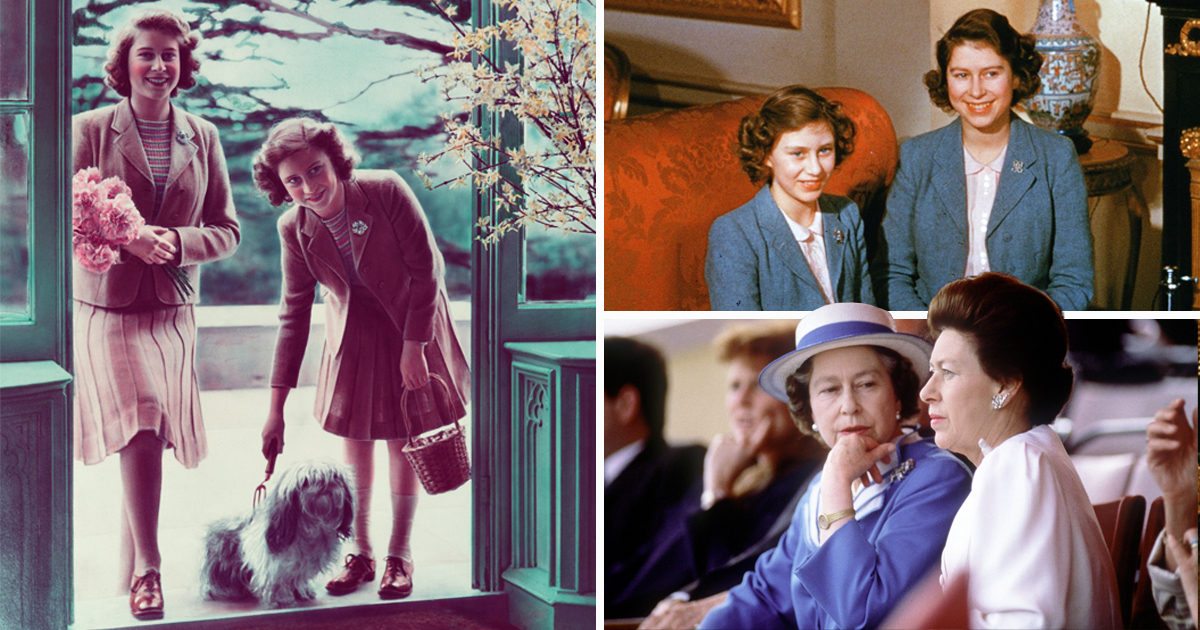 It is said that when Queen Elizabeth was told that her new baby sister would be called Margaret Rose, the four-year-old princess replied: ‘I shall call her Bud. She isn’t really a rose yet. She’s only a bud.’

For the next 71 years, their sibling relationship would be like no other. While the pair encountered ups and downs that would put any family to the test, throughout it all their bond remained strong.

While portrayals in Netflix’s hit drama The Crown, left viewers with the impression of a strained, tense relationship, one of bitter sibling rivalry, it was a far cry from reality.

While there’s no doubt the siblings had their disagreements, they were sisters who dearly loved each other, referring to one another in private as ‘Margot’ and ‘Lilibet’, even well into adulthood.

As little girls, they were seen walking the dog, visiting penguins, picking flowers, and painting pictures together – activities any other ‘normal’ siblings may do in tandem.

During the VE Day celebrations on May 8 1945, the pair – aged 19 and 14 – even managed to get permission from the King to abandon their royal duties and join the crowds of people celebrating on the street.

In an interview with BBC Radio 4’s Today programme in 2006, one of the Queen’s first ladies in waiting, Jean Woodroffe, recalled: ‘What was amusing is that we went into the Ritz Hotel through one door and out of the other door, the other end, doing the conga. The extraordinary thing was that nobody seemed to take much notice.

‘Then we stood outside Buckingham Palace with the crowd and we all shouted: ‘We want the King’ with everybody else until the King and Queen came out onto the balcony.’

King George VI liked to highlight the closeness of this family, repeatedly referring to them as ‘we four’.

With Margaret known as the King’s ‘joy’ and Elizabeth his ‘pride’, a royal insider once told the Telegraph that the younger princess was ‘spoiled terribly’ and treated as her father’s ‘pet… always allowed to stay up to dinner at the age of 13’. Despite this, her sister Elizabeth never grew jealous of her special treatment. Instead, she would simply respond with: ‘Oh, Margot!’

According to royal biographer Hugo Vickers, Elizabeth and Margaret were a much-needed constant in each other’s lives, even from a young age.

Speaking to Channel 5 documentary, Elizabeth: Our Queen, Vickers said of Margaret: ‘She was the companion of her childhood and she was younger than the Queen. They did talk a lot, more or less every day, and she was a very, very constant presence in her life.’

Meanwhile, James Mr D’Arcy, the documentary narrator, told viewers: ‘Princess Margaret had always been the Queen’s glamorous and mischievous sister and they were devoted to each other.’

When Queen Elizabeth married Prince Philip in 1947, Princess Margaret stood in lace, gazing on as one of her eight bridesmaids. They would ring each other on direct phone lines which ran between their two homes, chatting and giggling as sisters often do.

Behind the normality of their relationship, was the obvious unique element of royalty – with Queen Elizabeth destined for purpose and Princess Margaret figuring out how to carve out her own place in the world.

While the youngest of the sisters would grow up to be painted as a ‘chain-smoking, chain-drinking, man-eating monster with flashes of wit and unsteady charm’, Queen Elizabeth was given an increasing amount of responsibility when she was crowned in 1952.

In her early twenties, Princess Margaret fell in love with Captain Peter Townsend, a man nearly twice her age, who had been recently divorced. The Church of England looked down on divorce and as Queen Elizabeth was the head of the church, she would be the one who would have to approve or disapprove of the marriage – a weighty decision for the devoted sister and Monarch.

While in The Crown, viewers watched as the Queen told her sister if she chooses to marry Townsend, she would no longer be a member of the royal family – as with much of the series, this was not historically accurate.

The reality was Queen Elizabeth and Prime Minister Sir Anthony Eden concocted plans in 1955 under which Princess Margaret could marry Townsend, without losing her title, responsibilities, or royal allowance. The only catch being, Margaret would lose her rights, and those of her children, to succession to the throne. In a letter from the Prime Minister to the Commonwealth, he said: ‘Her Majesty would not wish to stand in the way of her sister’s happiness.’

Despite all the work he and Queen Elizabeth made to allow Margaret to marry Townsend, the Princess announced she wouldn’t wed Townsend, and five years later, married Antony Armstrong-Jones – a commoner – instead. 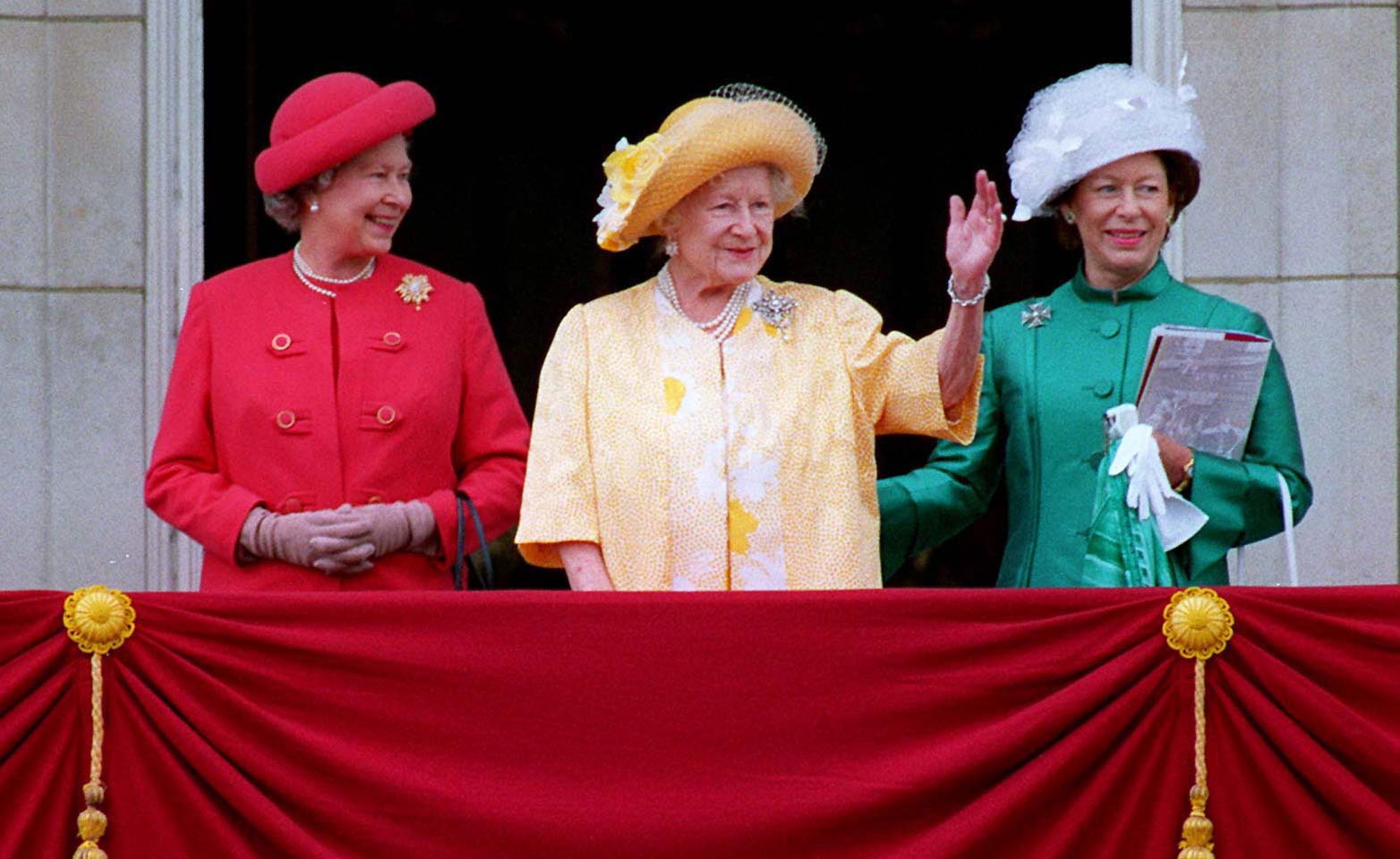 Although their lives took drastically different paths – the Queen adhering to her duty, while Princess Margaret was devoted to pleasure – Elizabeth’s affection towards her younger sister was widely known.

A royal family friend told Vanity Fair in May 2016, that Elizabeth would knowingly ask their mother: ‘How’s Margaret this morning?’

Meanwhile, in her memoir, Lady in Waiting: My Extraordinary Life in the Shadow of the Crown, Anne Glenconner, who served as Margaret’s lady-in-waiting for 30 years, wrote that despite their many differences, the sisters maintained a close bond. ‘Margaret was very loyal to the Queen,’ she told an interviewer for People magazine.

When Princess Margaret tragically passed away in hospital at the age of 71 from a stroke, it was a huge blow for her big sister Lilibet. As her health had declined through the night, the Queen made sure she was kept abreast of the situation.

Following her death, Margaret’s funeral was held on the same day as her father’s, King George VI, 50 years earlier.

After her beloved sister Margot’s peaceful death, while they were once united in grief five decades earlier for the passing of their father, Queen Elizabeth remained without her trusted sibling for the first time during the quiet service.

The stoic monarch, who rarely cried publicly, was seen dabbing her eyes with a handkerchief during the service – a testament of the unbreakable bond between the sisters, defying all odds of lifestyle to remain undeniably close, and their relationship impenetrable.

Margaret was the ‘bud’ that bloomed and blossomed with the tenderness and loving care of her dearest sister, Lilibet – right until the very end.