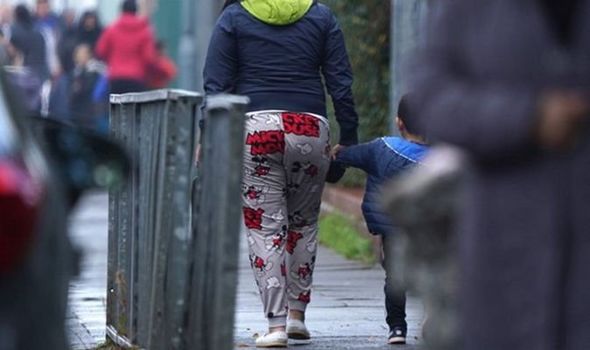 Mums and dads are still arriving at Ayresome Primary School in pyjamas despite being kindly asked to dress properly for the school run. The request from the Middlesbrough school was shared widely on Friday, but photographs from Monday morning show that the message fell on deaf ears.

A man was spotted at the school gate wearing slippers, a grey dressing gown and his pyjamas.

Another woman wore a fluffy robe with ears on the hood, colourful pyjamas and her hair in a messy bun.

And another mum opted for a pair of velour pyjama bottoms with sliders and bright orange socks.

The polite message from the school said: “Please can we ask that all parents/carers dress appropriately when dropping off and collecting children from school. Dressing gowns on the school yard are not appropriate.”

Many parents agreed with the school. One man at the school gate told TeessideLive he is “absolutely sick of” seeing parents wearing their pyjamas for the school drop off.

He said: “It is not hard to get dressed in the morning. Imagine how much those kids are going to be ridiculed when they get into school. They don’t even put on a fresh pair to come and collect them. A lot of the parents are disgusted by it.”

Another mum said parents have been wearing pyjamas to the school for decades. She said: “My oldest who came here is 17 now and they were doing it then. They are local parents and it takes only two minutes to chuck some clothes on so there’s no reason.

“They’re taking the kids to school in their pyjamas and coming back in the same ones. It’s embarrassing for the children. There’s no excuse you should get washed and dressed every morning.”

Some did defend the pyjama-wearing parents. One Facebook user said: “Why does everyone judge others so much? I mean I don’t and wouldn’t but it’s cold, if they want to wear a dressing gown leave them to it.

“They might have had a bad morning or struggling with their mental health or just want to climb back in bed when they get home. Big deal.”

Another agreed: “At least they are getting their children to school. No one knows anyone’s circumstances and what it took for them to be able to get out if bed and get the kids ready and to school.”