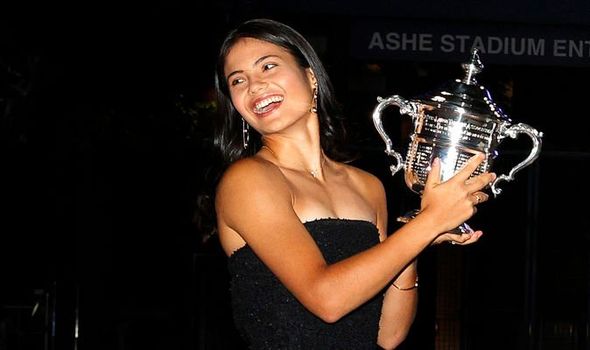 Before winning a wild card at Wimbledon this summer she was ranked at 361 in the world and had taken £30,000 in winnings. But her last-16 run at SW19 earned her £181,000 — then winning the US Open has added a staggering £1.8million — prompting her to “splurge” on some new wireless earphones.

Last night it was reported Emma will definitely be honoured by the Queen for her extraordinary US Open triumph.

The 18-year-old is certain to get at least an MBE after her whirlwind success in New York just months after she took her A levels.

Her 6-4 6-3 triumph on Saturday could send her on her way to raking in more than £100million over five years, said super-agent Jonathan Shalit, boss of the InterTalent Group.

And by the end of an injury-free career she could even be worth a mind-blowing billion dollars – thanks to her sporting talent, unique back story and charm, Jonathan said every company will want her to advertise their brands, adding: “In the space of a week, Emma has become a global phenomenon.

“She is completely fresh and new, and always happy, which is what we are all looking for as we come out of the pandemic. Emma is a sponsor’s dream. She is a mix of Romania, China, Britain and Canada. She is 18 and she is a gorgeous young woman.”

Despite her £1.8million winnings at the weekend, the ace’s immediate spending plans were very modest. She said: “There’s a running joke in my team because before my first-round qualifying match I lost my AirPods. I was basically running around the changing rooms three minutes before my call to go on trying to find them.

“I was thinking to myself, you know what, if you win this match you can buy yourself a pair of AirPods and that’s become a running joke.”

Yesterday Emma tweeted a picture of herself holding the US Open trophy and a Union Flag -with the message: “We are taking her HOMEEE.”

“She is mixed heritage, social media savvy, aspirational, which she combines with what seems like a positive predisposition.

“Some of the deals she already has, with the likes of Nike, could become more lucrative for her. Some of the big mobile brands as well as digital platforms will probably be interested.” Emma is managed by Max Eisenbud, of the IMG agency, who secured £20million in sponsorship for Maria Sharapova.

She has a clothing and shoe deal with Nike and a racquet tie-up with Wilson, and she appears in the latest Vogue. Her Instagram followers have trebled to 1.2 million in three weeks.

Super-agent Max also looks after Novak Djokovic, Osaka and a host of other tennis headliners.

Jonathan said: “Nike will be on the phone to her agent to tie her in for as long as they can. Every female teenager in the world will be looking at Emma. Whatever brands she is wearing, they will be asking their parents to buy it.”

Bookmakers have Emma as the odds-on favourite to win BBC Sports Personality of the Year this Christmas.

William Hill have also given her 10-1 odds to be on the New Year’s Honours List. And that likelihood is helped by the star earning congratulations from the Queen and William and Kate.

William Hill’s Rupert Adams said: “BBC Sports Personality of the Year celebrates outstanding achievement, which is what she’s done. Being a woman helps, as she will get a lot of female votes.”

But TV presenter and ex-tennis star Sue Barker warned on LBC News: “Emma is going to suddenly get the pressure and the expectation. Osaka was only 20 when she won the US Open and she said it changed her life in a way she didn’t like.

“Emma needs to be protected. But she has a very good team around her.”