PARIS — President Emmanuel Macron of France has tested positive for the coronavirus and will work in isolation for the next week, prompting other European leaders he has met to take precautionary measures and complicating Europe’s efforts to overcome a crippling second wave of the pandemic.

The presidential Élysée Palace announced the illness without clarifying Mr. Macron’s symptoms or the gravity of his condition. As one of Europe’s youngest leaders, at 42, the president is not among the most vulnerable to the virus, but its effects are known to be unpredictable. How open the presidential office will be about his condition as it evolves remains an open question.

Gabriel Attal, the government spokesman, said: “Late last night, the president began feeling Covid-19-like symptoms. He immediately isolated himself and took a PCR test. The result was communicated to us this morning.” He added that efforts were underway through contact tracing to identify anyone who met recently with Mr. Macron. 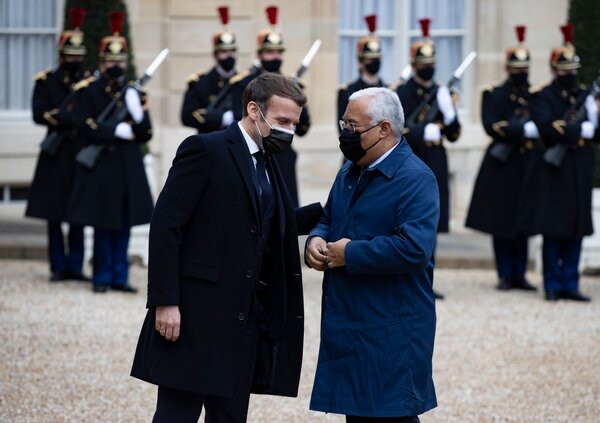 How Mr. Macron contracted the virus is a mystery. Other world leaders who have had it — including President Trump, President Jair Bolsonaro of Brazil, and Prime Minister Boris Johnson of Britain — were more cavalier or skeptical about the pandemic. Mr. Macron, however, has been consistent in emphasizing the gravity of the threat.

In the past France has been reticent about revealing details of its president’s health. The cancer that took François Mitterrand’s life, for example, was alluded to only quietly, if at all. The august aura of the presidency has been viewed as incompatible with the detailing of bodily functions. But as a modernizing president, Mr. Macron may want a transparent approach.

The cascade of leaders isolating themselves came at a difficult moment. Europeans across the continent are restive over restrictive measures that have become a tiresome way of life. After six weeks of a second lockdown, an 8 p.m. curfew across France came into effect on Tuesday. It will last at least another month.

Christmas lights twinkle over ghostly Parisian streets where all restaurants are closed. The holiday season will be a pale shadow of itself. In the gastronomic capital of the world, people are reduced to grabbing sandwiches on city benches.

Mr. Macron will celebrate his 43rd birthday in isolation on Dec. 21. His wife, Brigitte Macron, who is 67, tested negative on Tuesday and is also working in isolation.

Europe is facing its most severe recession since World War II. The disappearance from view of several leaders is likely to sharpen anxiety. Millions of people have been furloughed. The French economy, the second largest in the eurozone, is expected to shrink 9 percent this year.

Billions of euros have been spent to cushion the devastating effect of the virus, but prospects for a quick recovery have faded as the number of cases across Europe rose again this fall. The French central bank said on Monday that activity would not recover to pre-pandemic levels before 2022. Germany, the Netherlands and the Czech Republic are among the countries that have recently imposed lockdowns.

The French weekly Le Point reported that Mr. Macron had dined Wednesday night at the Élysée Palace with a dozen of his political allies, who were all socially distanced from one another at a long table and wearing masks except when eating. At the meal, Mr. Macron showed no symptoms, participants said.

The president’s approval rating has been hovering around 38 percent, relatively high for a French leader. It fell as low as 24 percent in 2018. His tough response on issues including security, jihadist terrorist threats and immigration has reflected the mood of a significant section of a buffeted country.

Whether he would now get a boost out of sympathy for his condition or see concern over a political vacuum affect his popularity was unclear. The next presidential election is 18 months away.

Hopes for better times are vested in a vaccine. Prime Minister Jean Castex, who will also work in isolation after attending the weekly cabinet meeting with Mr. Macron on Wednesday, announced this week that inoculations would start in the last week of the year.

France is expected to receive a first shipment of 1.16 million doses by then, once European and French authorities have approved the Pfizer-BioNTech vaccine. But the vaccine will be no immediate panacea.

Since the pandemic began, there have been more than 2.4 million cases of Covid-19 in France and about 59,000 deaths, among the worst numbers in Europe. New cases are averaging about 12,000 a day. The number of patients in intensive care has decreased to around 2,900 since the second lockdown, compared to almost 5,000 a month ago, but that was not enough to avoid the imposition of a holiday-season curfew.

Reporting was contributed by Raphael Minder from Madrid, Liz Alderman, Constant Méheut and Aurelien Breeden from Paris, and Matina Stevis-Gridneff from Brussels.