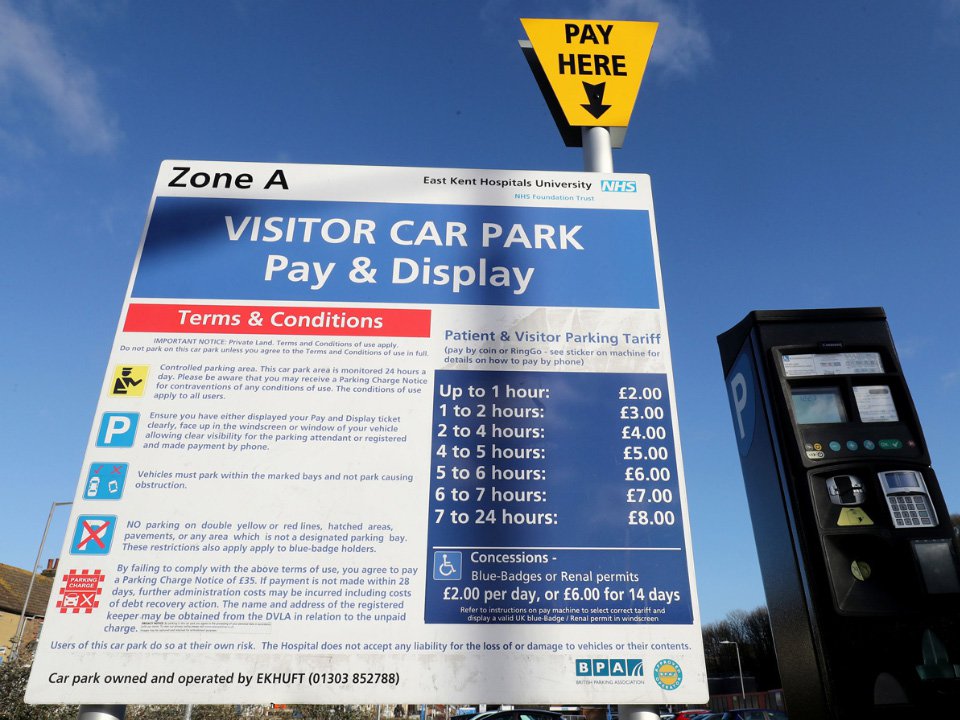 On Friday 1 April, free parking for the majority of NHS hospital staff, patients and their visitors in England came to an end, after charges were suspended in March 2020.

According to The Department of Health and Social Care, free parking had been introduced ‘for the duration of the pandemic’. Well, with an estimated one in 16 people still Covid positive, the pandemic isn’t over, and working conditions in the NHS remain extremely challenging.

As much as it has been a big help for staff not to have to pay parking fees during the peaks of the pandemic, don’t be fooled into thinking that free parking came without a fight in the first place.

The government did not offer up this concession out of the goodness of their hearts. The initiative was forced by public pressure and a viral petition signed by over 400,000 people. The GMB trade union also campaigned hard on this issue for their members.

Staff were redeployed long-term onto unsociable shifts, making their attendance via (vastly reduced) public transport much more difficult or indeed dangerous, due to the risk of spreading the virus, so in order to ensure there was enough staff to keep essential services running, some arrangement had to be made.

Now, however, free parking is over for the majority and the eye-watering charges have been reintroduced.

According to a freedom of information request, yearly hospital parking charges have been known to go up to £1,300, a significant portion of take-home pay, especially when one considers that so many of our lower paid NHS workers are already regular visitors to food banks.

Couple this to the fact that the cost of living is now set to massively increase and the so-called pay rise of 3% that many staff were offered in July 2021 does not even keep pace with inflation, the situation for our NHS workers is looking extremely bleak.

Profits from many hospital parking charges are used to fund essential services for patients, they are therefore effectively a tax on the sick or the staff that work there. Patients and NHS staff in England already pay too much for parking at hospitals.

The fact that they exist in the first place is due to a combination of private companies managing estates instead of hospital trusts, and long-term government underfunding.

Trusts can say that without charging parking fees, money would need to be taken away from other areas of the hospital to pay for maintenance, but surely it’s time to fund the NHS properly so that the sick or those who work in our NHS aren’t used as income to prop up an underfunded system?

Where they are committed to private finance initiative (PFI) contracts, in some cases hospitals are handing over millions of pounds to private companies to run their car parks, and additionally allowing some to cash in on parking fines. Under these arrangements, all the money raised from charging patients, staff and visitors to park goes to private firms under contracts lasting many years.

Critics of free hospital parking argue it could be abused by out-of-town shoppers, and worse still, ask why patients and staff can’t just walk or rely on public transport.

Neither of these arguments stand up to any kind of scrutiny. A significant number of NHS staff work shifts, and long ones at that. It is completely unrealistic to expect them to walk home in the dark after 14 hours on their feet, or to expect that there will be a regular bus service available at 11 o’clock at night.

It is also not beyond the wit of hospital trusts to issue proof of attendance to hospital visitors, patients or indeed staff, in order to legitimise their parking and therefore avoid the abuse by shoppers of a free system; they manage it in Wales and Scotland where hospital parking is free – and it works just fine.

The government found billions to dish out in PPE and similar contracts during the height of the pandemic as well as £37billion on an inadequate test and trace system; it could find the money now if it really had a mind to, in my opinion. Instead, some of the sickest, lowest paid, and hardest working people appear to be being exploited.

It is not only about paying a daily fee (anything from around £8 to £15 per day), it is not even about the fact that private companies profit from hard-working essential staff. It’s as much to do with the fact that this is a slap in the face to every single frontline health worker who has risked their life and damaged their mental health over the last two years.

And are still doing it.

It’s some sort of misleading admission that Covid is over. The NHS is haemorrhaging staff at an alarming rate. A record number of over 400 NHS staff have left the service in England every week over the last year. The government should be looking at ways to retain them instead of making life even more difficult.

Now the coloured rainbows have faded and it suits politicians less to use the efforts of NHS staff to bolster their public image, the gargantuan efforts of these workers are again demoted, undervalued and largely forgotten.

Despite all they’ve done and continue to do, taking away such a basic opportunity to support our NHS staff is a reminder of where these essential workers sadly rank in the grand scheme of things, and this government should be ashamed.