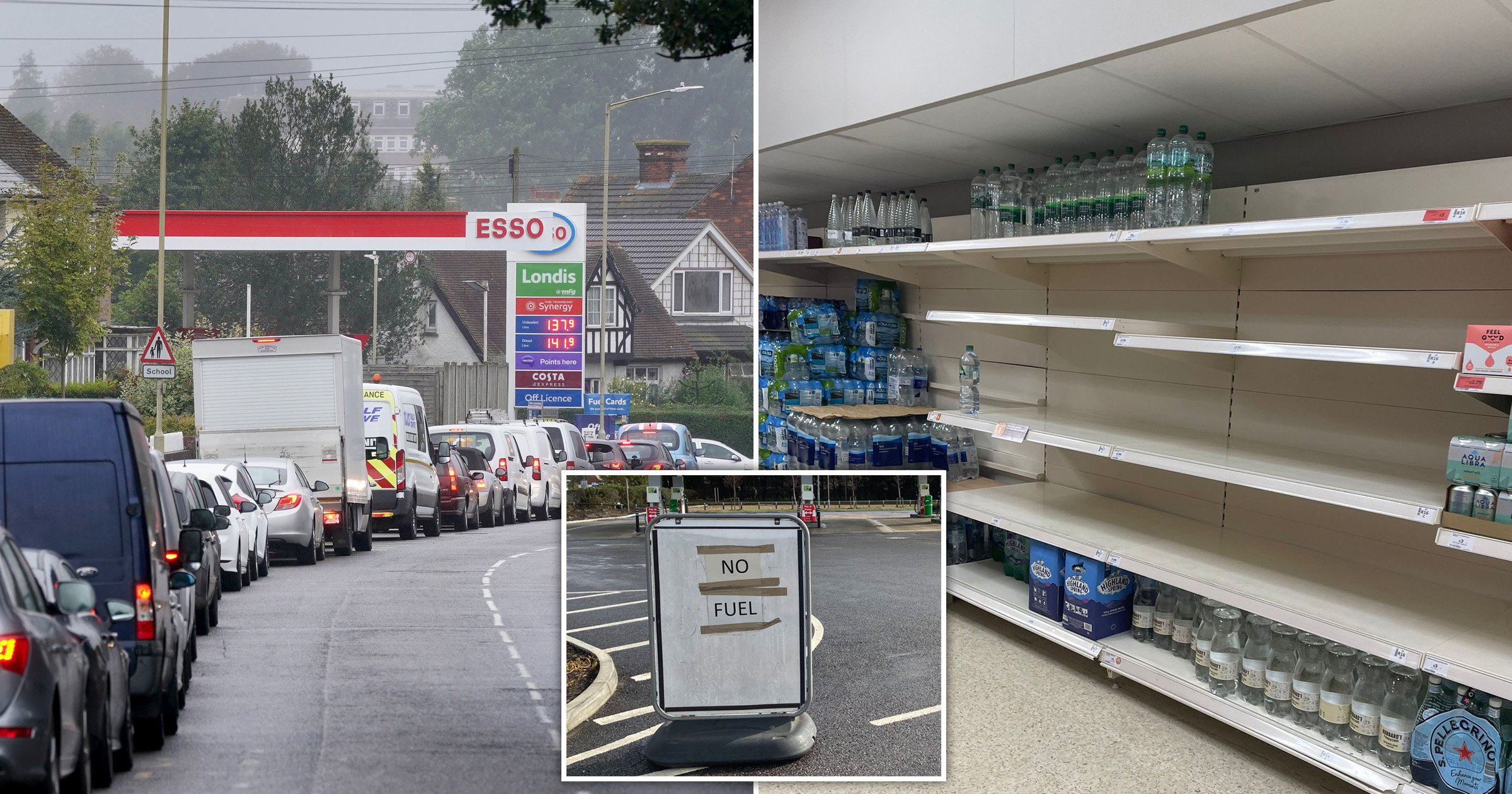 Petrol pumps and food shelves are expected to remain empty for weeks as ministers continue to deal with the ‘effing crisis’.

Policing Minister Kit Malthouse said this morning that the nationwide disruption of the fuel supply chain should be resolved in a ‘week or so’.

Boris Johnson has also suggested the situation was ‘stabilising’, but the Government has been accused of ‘gaslighting’ the country over the seriousness of the problem.

Downing Street insiders are said to have given the ongoing nationwide disruption the ‘EFFing’ label in reference to problems in the energy, fuel and food sectors.

Only hours after Mr Malthouse’s comments, it was announced that 200 military personnel – including 100 drivers – have been undertaking training at haulier sites and will start deliveries next week to help relieve the situation.

The past week has seen a number of petrol stations reporting shortages of fuel, which whipped up a panic buying frenzy across much of the country.

Mr Malthouse told the BBC Radio 4 Today programme earlier today: ‘We are still seeing strong demand in parts of the country around fuel, albeit that there is no problem of supply into the country.

‘The distribution mechanism is trying to respond to this unprecedented demand.

‘My latest briefing is that the situation is stabilising, that we are seeing more forecourts with a greater supply of fuel and hopefully that, as demand and supply come better into balance over the next few days – week or so – that we will see a return to normality.

‘What we need to see is a stabilisation and improvement over the next few days. Obviously there only so many tankers that can be used to get this fuel around.

‘They are trying their best to get around as fast as possible. There is co-ordination now across the country looking at where there are pockets of supply problems and demand strength and trying to bring the two into balance.’

Even if the fuel shortage is resolved with the help of the army, ministers expect problems in other areas to continue in the months ahead.

A massive increase in the wholesale cost of gas has prompted a handful of energy firms to collapse, with consumers facing skyrocketing bills this winter.

A huge shortfall in HGV driver numbers is already hitting supply chains, with empty shelves in some supermarkets.

Industry chiefs also predict there will be further food and potentially even toy shortages disrupting the Christmas holidays.

A shortage of food processing workers and butchers is adding to the disruption, with farmers warning they are running out of room because of growing animal numbers and they could soon be forced to start a ‘mass cull’.

The Government has responded to the worsening situation by relaxing competition rules for the oil industry, which means oil firms are temporarily able to work together to manage stocks and distribution.

It has also confirmed it will issue visas for 5,500 poultry workers from late October up to December 31 this year.

This is in addition to 5,000 temporary visas for HGV drivers amid an estimated shortage of 100,000.

London, the South East, the North West, the West Midlands and the East Midlands all currently have fuel levels of below 20%, according to Whitehall’s own analysis.

These regions have been labelled ‘red’ under a new traffic light system set up to monitor the crisis.