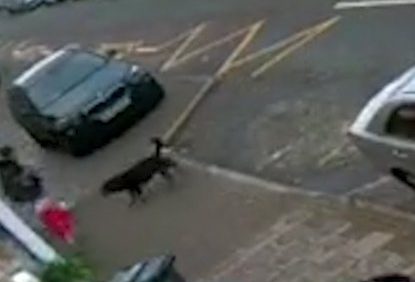 Two young children were rushed to hospital after being mauled by an escaped guard dog.

The two girls, aged two and three, were both injured during the attack but their conditions are not life-threatening.

Shocking CCTV footage shows the huge dog charging across the road and mauling the girls as they were walking with a woman, with one toddler dragged around ‘like a rag doll’.

Officers were called to reports of a dog attack in St Saviour’s Road, Birmingham, just after 12.30pm on Monday.

It is understood the guard dog escaped from nearby business premises before attacking the two girls.

The three-year-old had hand and leg injuries after being bitten and the two year-old had scratch marks and a leg injury.

An ambulance spokesman said both children were treated at the scene before being taken to Birmingham Children’s Hospital.

He said their conditions were not life threatening.

Police said the animal has been seized.