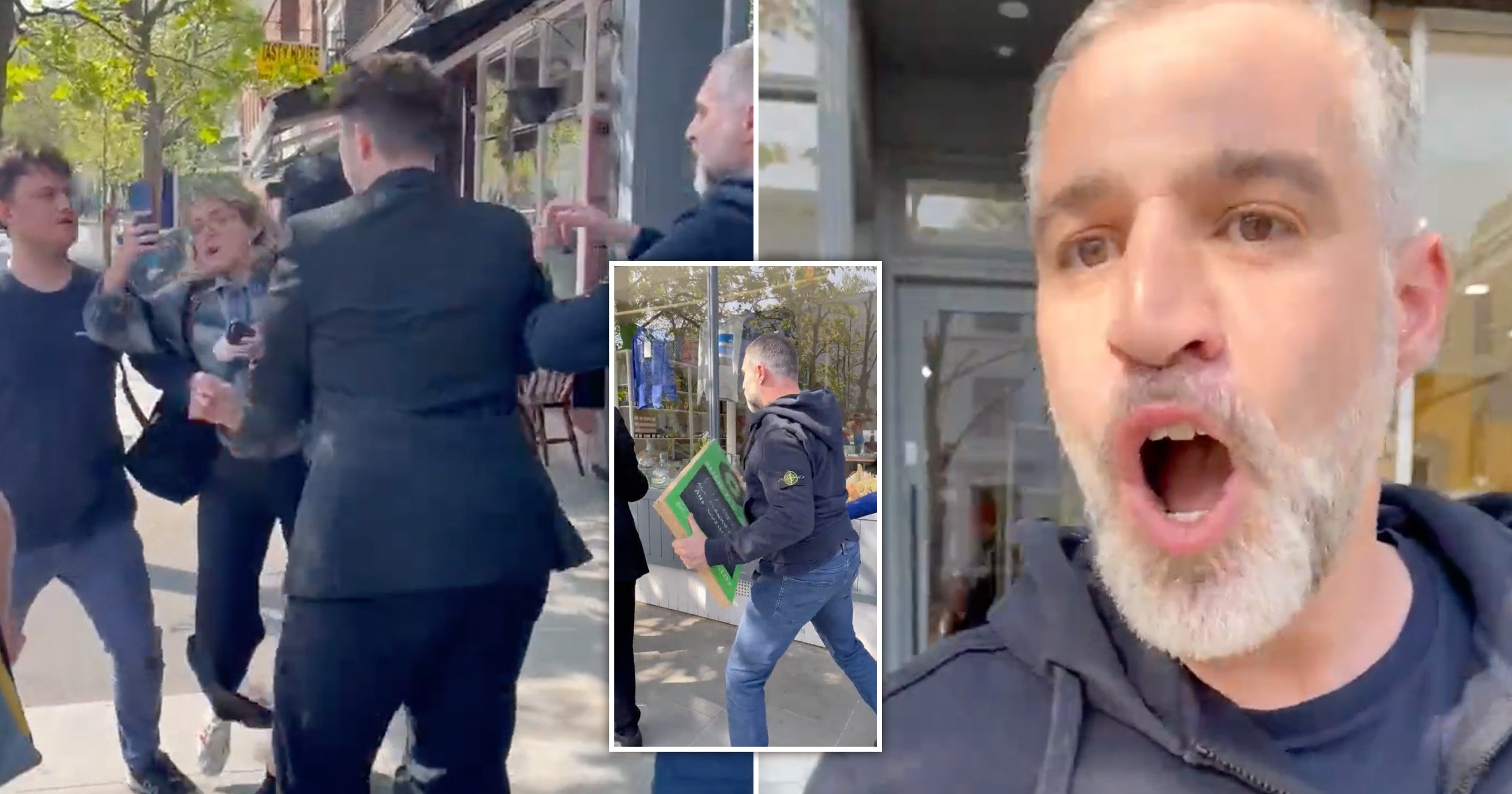 An estate agent has got into an altercation with tenants following a meeting over their ‘illegal eviction and unlawful fines’.

Footage recorded outside Eaton Green in Denmark Hill, south London, at 10.40am yesterday captured the moment a man pursued a group of young people out of the branch and attempted to attack them.

It shows the campaigners from London Renters Union being ushered out before one of them can he heard saying ‘well done, w*****’, prompting him to run out of the building asking ‘what did you say?’.

He then throws a kick at a young man and continues to shove the members of the group, before picking up a sandwich board and swinging it from side to side.

The man – who is dressed in plain clothing – is then guided back inside Eaton Green by two men in suits, but not before he squares up to the woman recording, telling her: ‘I will see you in -’.

The video of the incident was posted online by Sarah Warsama who wrote: ‘My estate agents attacking us this morning after we tried to negotiate with them against an illegal eviction.’

It was then shared by the London Renters Union who asked its 16,500 followers to ‘show solidarity’ with its campaigners.

‘Today several LRU members went to the office of ⁦Eaton⁩ estate agents in Camberwell to demand a stop to a campaign of harassment which has seen them threatened with illegal eviction and unlawful fines,’ it wrote.

‘This was their response.’

The Eaton Green Twitter account – which has since been taken down – reportedly accused the group of ‘making loud and aggressive demands’ and ‘hurling abuse and profanity’ at its staff.

At their office earlier Eaton Green were aggressive and said they planned to physically evict our members on Monday. This would have been illegal.

A director has now promised in writing this wonât happen.

Thanks everyone who kept up the pressure https://t.co/KBVOgfvQV6

In a response to London Renters Union, it wrote: ‘In the spirit of clarity, seven people entered the office led by an individual named Kane making loud and aggressive demands.

‘Within minutes we asked them to calm down, but it was clear their intention was to intimidate and started hurling abuse and profanity.

‘Several attempts were made for the individuals to calm down however it was plainly obvious there intentions were to disrupt in an extremely aggressive manner and were asked to leave.’

The union later confirmed a director had ‘promised in writing’ the tenants would not be evicted.

Police went to the scene and spoke to those involved, but no arrests were made.