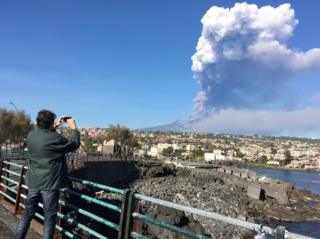 Europe’s most active volcano, Mount Etna in Sicily, erupted on Monday, with officials reporting more than 130 earthquakes of up to 4.0 in magnitude.

The Mount Etna observatory said lava had spewed from a new fracture near its south-eastern crater.

A local vulcanologist said it was Etna’s “first flank eruption” in more than a decade.

Volcanic ash covered nearby villages, while planes into Catania airport had to be halted temporarily.

A large explosion was felt close to Etna during the morning.

Catania airport said later that the airspace had been reopened to allow four planes to land per hour and that the situation was being monitored on a regular basis.

Italy’s INGV volcanology institute said that during a three-hour period from 08:50 (07:50 GMT) on Monday more than 130 earthquakes took place.

That was followed by intense eruptions from the volcano’s new south-east crater.

Although Etna has seen frequent eruptions, the INGV said in August that the volcano had grown faster than ever before in recent years.

In March a UK-led team said that the whole structure of Europe’s premier volcano was edging towards the sea at a rate of 14mm per year.