Shocking footage has emerged of EU officials in panic amid the prospect of a no deal Brexit. The video, feature in new BBC documentary Brexit: Behind Closed Doors, Guy Verhofstadt’s top aides Guillaume McLaughlin and Edel Rettman Crosse received a message Michel Barnier’s Norwegian assistant Georg Riekeles warning there will be no Brexit deal. When Guillaume McLaughlin, Mr Verhofstadt’s chief of staff, read the message to colleagues, one gasped and shouted: “What?” Mr McLaughlin repeated: “Georg says there is no deal.

“That’s what Georg says. ‘No deal. May got angry about your request that it has to be a declaration’. She said: ‘too bad for EU citizens’.”

One of Mr Verhofstadt’s team can be heard shouting “Really?” while another said: “He’s taking the piss.”

After speaking on the phone, Mr McLaughlin can be seen storming back into the meeting room and shouting: “No deal. There is no deal.

“This time it’s not Norwegian humour.” 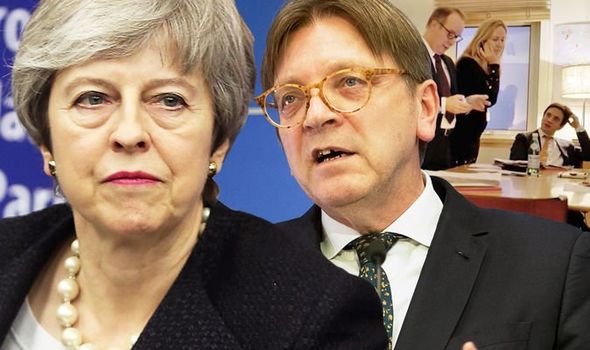 One person replied: “He doesn’t know the details, Guillaume. He is just passing on the message.”

The footage, filmed in December 2017, happened as Theresa May battled with the EU to strike a last-minute deal in order to move onto the second stage of Brexit talks.

But the Prime Minister was forced to halt progress after the DUP refused to back her Irish border plan, which raised the prospect of a no deal exit.

Mrs May managed to get a break the Brexit deadlock on December 7, 2017, when she made an agreement with the Brussels bloc on EU citizens’ rights, the £39bn Brexit divorce bill and the Irish border issue.

The comments come as European Commission President Jean-Claude Juncker this week urged Theresa May to “speed up” and deliver on Brexit before he leaves office at the end of October.

Speaking at a “citizens’ dialogue” event in Sibiu, Romania, the eurocrat revealed he had told the Prime Minister to “speed up the process” to avoid clashing with his departure.

Mr Juncker said: “I will stop my job on November 1 this year. In fact at midnight on October 31.

“The British are supposed to leave on October 31 and I told Theresa May, ‘I will leave at midnight so please speed up the process.”

Theresa May is set to meet the 1922 backbench executive of Tory backbenchers next week after she refused to set a date for her departure following a meeting on Wednesday with the chair of the 1922 Committee, Sir Graham Brady.

Following the meeting, Sir Graham said the Prime Minister was convinced she would attempt another vote on her Brexit deal before the European Parliamentary elections later this month.

He said: “It is the intention to have a further vote, probably a second reading of the withdrawal agreement bill before the European elections take place and hopefully in the much nearer future than that.

“That is my understanding.”