The European Commission has insisted that it will not be banning Covid vaccine exports to the UK. Earlier on Friday, the EU announced plans to control exports into Northern Ireland, after a public row with manufacturer AstraZeneca.

AstraZeneca has delayed delivery of Covid vaccine doses to the 27 Member States of the EU.

It’s meant that many European countries have fallen behind in their plans to vaccinate the population.

As a result, the EU decided to trigger Article 16 of the Northern Ireland Protocol; part of the Brexit withdrawal deal.

It meant that the European Commission tried to stop the uninterrupted flow of coronavirus vaccines into Northern Ireland. 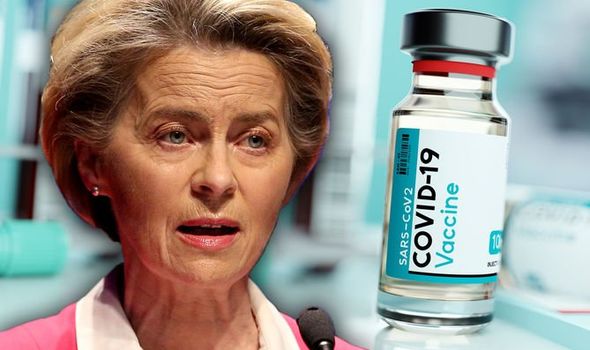 But the European Commission later released a statement, explaining that the EU was not banning exports to the UK.

It confirmed that it would not be triggering the “safeguard clause” in the Brexit deal.

But, plans will be put in place to allow EU Member States to authorise exports.

The Commission also announced that it would be publishing new regulations tomorrow, which would “fine-tune” the decision-making process.

The European Commission statement read: “To tackle the current lack of transparency of vaccine exports outside the EU, the Commission is putting in place a measure requiring that such exports are subject to an authorisation by Member States.

“In the process of finalisation of this measure, the Commission will ensure that the Ireland / Northern Ireland Protocol is unaffected. The Commission is not triggering the safeguard clause.

“Should transits of vaccines and active substances toward third countries be abused to circumvent the effects of the authorisation system, the EU will consider using all the instruments at its disposal.

“In the process of finalising the document, the Commission will also be fine-tuning the decision-making process under the implementing regulation.

“The final version of the implementing regulation will be published following its adoption tomorrow.”