Temperatures were set to soar across Europe beginning on Wednesday, with authorities from Paris to Warsaw issuing heat alerts, canceling events and bracing for potentially record heat across the region.

Meteorologists say the temperatures, a result of a warm air mass traveling north from Africa, could climb well above the typical June average to 40 degrees Celsius, or more than 104 degrees Fahrenheit, in large stretches of the continent.

Heat waves like these are becoming more frequent and prolonged, with hotter temperatures appearing earlier in the season, weather experts say. Here’s what to know as the mercury rises.

Exams will be postponed — and so will vacations.

Governments and residents were scrambling to make preparations for the worst of the weather, expected to peak on Friday afternoon before easing over the weekend.

“The whole government is mobilized,” President Emmanuel Macron told reporters on Monday as the heat wave made headlines and dominated television. 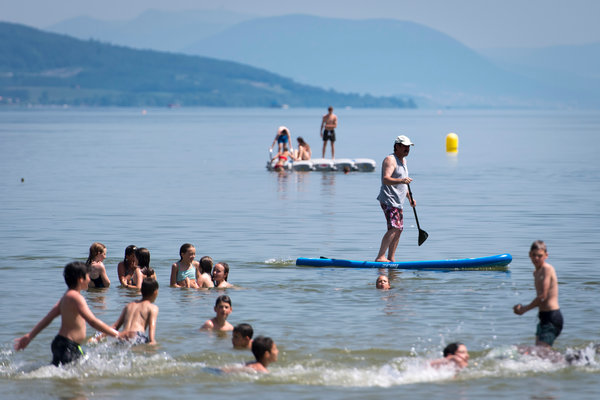 In France, memories of a deadly 2003 heat wave that left much of Europe sweltering still looms large. Around the country, fans and air-conditioners flew off store shelves.

Because of the heat, the education ministry made a rare decision to postpone exams for middle school students that were scheduled for Thursday and Friday.

Karine Sabatier, 47, who was on her lunch break in the Tuileries gardens of Paris near her offices on Tuesday, said that one of her two children was taking the exam, and that her family was forced to delay vacation plans because of the change.

“It’s true that it’s a bit bothersome, but I understand the measure,” she said. “Some schools don’t have any air conditioning at all.”

In Paris, the elderly, sick and vulnerable were encouraged to sign up for a special service that provides regular checks-in by phone, and city authorities announced that some parks would be open overnight.

In Spain, the national weather agency issued warnings for several parts of the country, with temperatures expected to climb by the weekend to above 40 degrees Celsius — or more than 104 degrees Fahrenheit — in Madrid and other inland areas.

The German meteorological service said this week’s heat will likely exceed a June national record of 38.5 degrees Celsius or 101.3 degrees Fahrenheit, set seven decades ago in the southwestern state of Baden-Württemberg. Temperatures could also shatter an overall heat record for the country, the agency said.

While scientists have yet to draw a firm connection between this particular heat wave and global warming, it fits a clear overall trend. As the climate changes because of greenhouse gas emissions, heat waves around the world are occurring more often, and they are hotter and last longer.

Isabelle Janin, 60, who works in Paris and was reading in the shade of some trees on Tuesday said that while the temperatures shouldn’t be a cause for panic, it was worrying to see a heat wave so early in the summer.

“If it becomes a regular occurrence in 10 years, then I’ll really start worrying,” she said.

But France’s national weather agency said heat waves were already on the rise. The number of heat waves in France has doubled in the past 34 years and is expected to double again by 2050, while their intensity has also increased.

The agency noted that temperatures this week were expected to reach a level not seen for the month of June since 1947, and could surpass that.

In some parts of Europe, this isn’t even the first heat wave of the summer. In Poland, temperatures soared earlier this month and left the city of Skierniewice running out of water. The local government asked people to limit activities like watering lawns and washing cars. Alerts have been issued for nearly all provinces for the upcoming temperatures.

The heat in Hungary has already broken records this month, reaching 35.8 Celsius in Budapest on June 17, a new high for this time of year.

The Swiss government’s meteorological agency, MeteoSwiss, issued a rare level 4 heat warning for some pockets of the country, its highest alert level.

Infrastructure could be damaged.

One of the biggest concerns across stretches of Central and Eastern Europe is that older infrastructure — like the tram tracks in cities across the region — could buckle and cause accidents.

Polish officials have also warned drivers of potential cracks on the road as the sun bakes the asphalt and possible train delays as the heat scorches the tracks.

Saxony-Anhalt, a state in the center of Germany, issued temporary speed limits on two sections of the country’s famous autobahn, as engineers fear the heat could lead to minor road damage as the asphalt expands and buckles.

On one section that usually does not have speed limits, drivers will have to slow down to 120 kilometers an hour, or roughly 75 miles an hour. On another stretch, drivers will be limited to 100 kilometers per hour, around 62 miles per hour.

Warnings about the rising risk of wildfires have also been issued in many of the affected countries, a cause for concern as there is already an increase in fires this year.

By mid-June, the number of wildfires across Europe had already far exceeded those in the entire 2018 season, according to the Emergency Management Service of the EU agency Copernicus.

Spain issued fire alerts for regions stretching from Extremadura, in the west, to Catalonia, in the northeast of the country, after a particularly dry winter and spring.

The German state of Brandenburg was on high alert for forest fires. Authorities worry that the fires could lead to the detonation of buried and long-forgotten unexploded ordnance from World War II.

Megan Specia is a story editor on the International Desk, specializing in digital storytelling and breaking news. @meganspecia