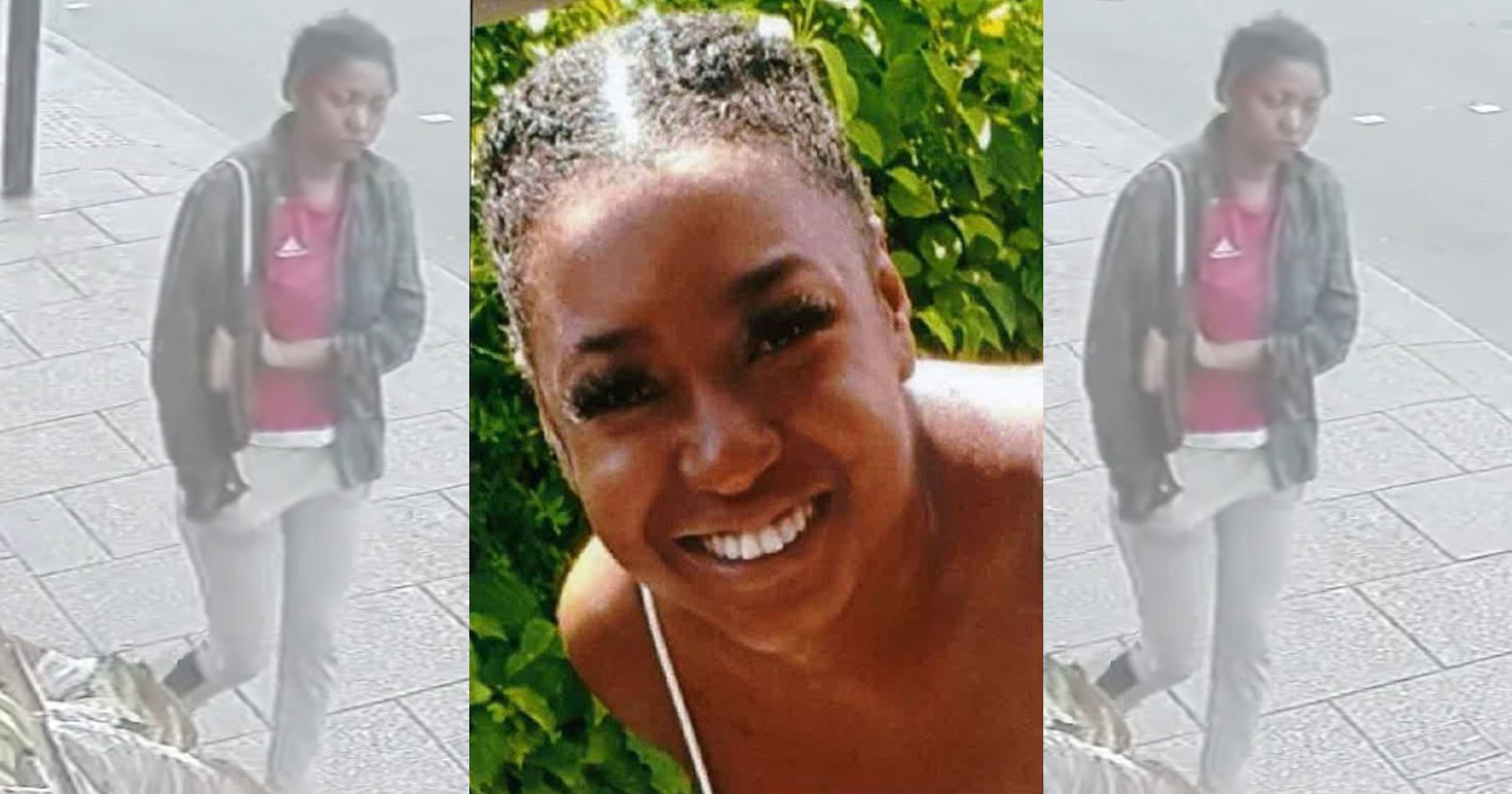 Owami Davies went missing on the streets of south London in early July.

The 24-year-old student nurse vanished without a trace – so why aren’t we hearing more about this tragic and terrifying case?

Here’s what we know so far: the last confirmed sighting of Owami was in West Croydon on July 7, just after midnight, three days after she left her home in Grays, Essex. An unconfirmed sighting placed her in nearby Clarendon Road later that morning, at around 7am.

Police have combed through 50,000 hours of CCTV to try to find her, and this week the British Transport Police issued its own appeal on Twitter saying Owami may be taking trains, and may appear ‘dazed or confused’.

They said she might try to speak to other lone females while travelling.

This is exactly the kind of information that the public should be aware of, that should be being shared across WhatsApp groups and community networks.

Everyone should be talking about Owami Davies.

Yes, if you search her name you will find articles on news websites explaining the key details of her case – that five people have been arrested, two on suspicion of murder and three on suspicion of kidnap, all of whom have since been released on bail – but the coverage more generally in the media and on social media hasn’t been as quick or extensive as you might expect, or to the level that we have seen in the past for similar cases of missing young women.

The unnerving quiet in the face of the unexplained disappearance of a young Black woman makes me think about my little sister, and my Black and brown friends. What would happen if one of them went missing?

I fear that rather than an instant media reaction and public outcry, their names would be hidden on the inner pages of the newspapers or tweeted sparingly.

Owami Davies has been on the news and in the papers, but why has it taken six weeks for coverage to really ramp up? For her name to trend? Where are the daily live broadcasts from her last sighting? Where are the map graphics of her known movements, or the regular updates and press conferences from the police?

Where are the think pieces, the viral Twitter threads, the marches and public vigils – like we saw in the aftermath of the murder of Sarah Everard?

The point of this comparison is not to pit horrific acts of gendered violence against each other, or to suggest that either case is more worthy of coverage or public engagement. It’s unhelpful to reduce the complexities of separate crimes against women to a weighing up of who has more privilege.

But within the context of systemic racism in the UK, it is important to be aware of how differently Black women are treated when they go missing.

Black people in the UK go missing at a disproportionate rate to white people. According to an enquiry in 2021, Black people accounted for 14% of missing person cases in England and Wales between 2019 and 2020, despite representing only 3% of the population.

There are real, life and death consequences that result from these kinds of inequalities, and it is devastating to think that opportunities to save her may have been missed

These stats make these inequalities in reporting and coverage particularly alarming. Owami Davies is far from the first example of this happening.

The families of Joy Morgan, Bibaa Henry and Nicole Smallman – all of whom were later found murdered – called out the media for their lack of interest. There were similar criticisms when Sabina Nessa was killed last year, with her sister saying explicitly that she would have been treated better and made more headlines if her family were white.

In part, it comes down to the perceived ‘value’ of the victim. Historically, certain types of people – those who are white, wealthy and often conventionally attractive – are considered more worthy victims than others.

It’s a phenomenon that has been coined ‘missing white woman syndrome’.

In a 2007 essay on the topic, academic Sarah Stillman stated the media ‘play a vital role in constructing certain endangered young women as valuable “front-page victims”, while dismissing others as disposable.’ Stillman adds that this hyper-focus on a very narrow demographic of victims makes the ‘marginalisation and victimisation of other groups of women, such as low-income women of colour, seem natural.’

In the case of Owami, the delayed and lacklustre response to her disappearance may prove fatal. Just this week, police confirmed that someone matching Owami’s description was spotted in the area she disappeared from days after the last images of her were captured on CCTV.

DCI Nigel Penney, who is leading the investigation, said: ‘It is possible she is in the local area and in need of help.’

Her desperate family also pleaded with the public to help find her: ‘I am begging, I am asking for the public’s help, from the people, to say if you know, if you have heard or seen her, or she passed you, please speak up,’ Owami’s mother Nicol Davies told PA.

Nicol said her family was ‘not complete’ without her daughter, adding that Owami was ‘really happy’ and recently secured a job at a London hospital for when she finished her studies in a few months’ time.

She was last seen wearing a dark jacket, red t-shirt, light grey joggers, slider type shoes and carrying a white handbag over her shoulder. Please keep looking at her pictures, memorise her face, and get in touch if you have seen anyone that fits her description.

I am worried, due to the silence around her case on social media and in print, it also means people who have information to find Owami may have missed the chance to help.

There are real, life and death consequences that result from these kinds of inequalities, and it is devastating to think that opportunities to save her may have been missed.

I’m so angry that yet another missing Black woman has seemingly been shrugged off the agenda, that the unthinkable tragedy of Owami’s disappearance is not being treated as such, that violence against Black women is so frequently minimised and overlooked.

I am appalled that Owami’s family are having to plead with the public to care about their pain, and that activists online are having to generate hashtags in order to campaign for her life to be valued.

Diversifying the power structures in newsrooms to give a voice to marginalised communities would be a crucial first step.

When the people who decide which stories are headline-worthy are overwhelmingly white, it is unsurprising that decision-makers will be biased towards people who look like themselves, or their sister or their daughter, over people who don’t.

But, more immediately, the focus has to remain on Owami, on finding her and getting her home safe to her family.

Someone, somewhere knows something. Please spread the word about Owami with your friends, family and local networks. If you know anything, or see anything, please get in touch.