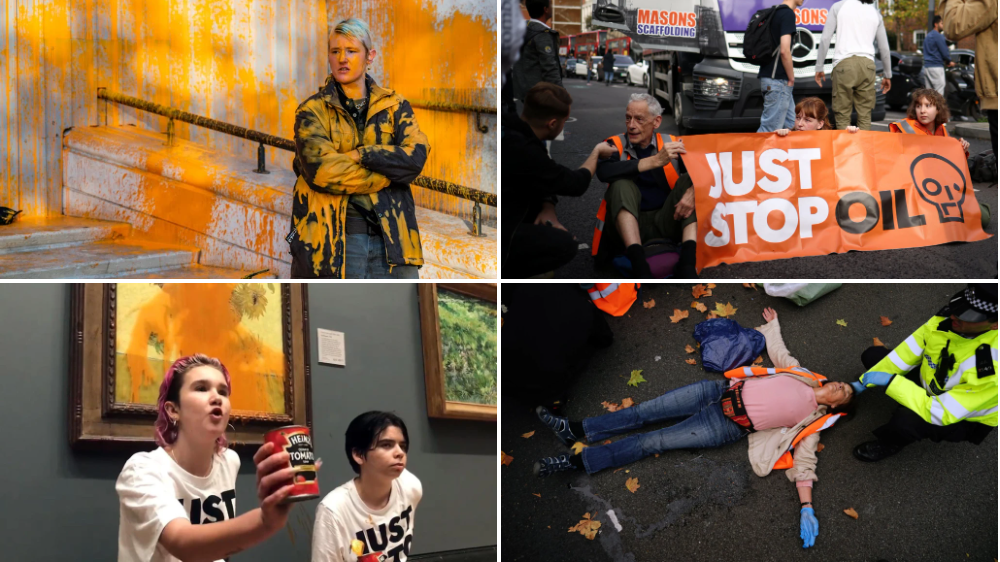 If someone mentions artwork or soup in conversation, your mind is sure to go to one thing.

The Just Stop Oil movement made headlines this month when protestors doused famous Van Gogh painting Sunflowers with tomato soup that was protected by two sheets of glass.

The protestors then glued themselves to the gallery wall below the estimated $84.2million (£72.4million) painting.

But this wasn’t the first time the group hit headlines.

The group also gave the Home Office, Bank of England, and MI5 a makeover after covering them with orange paint.

The sudden surge in attention surrounding the group has many people asking just who is Just Stop Oil, and what are their main objectives? Here’s what you need to know.

What is the Just Stop Oil movement?

Just Stop Oil is made up of a number of environmental organisations working together.

The coalition wants to ensure that the government commits to ‘ending all new licenses and consents for the exploration, development, and production of fossil fuels in the UK,’ according to their website.

The movement began on February 14 this year with a month of oil terminal disruptions across Southern England beginning in April.

They have pledged to take part in non-violent direct action that targets the UK’s oil and gas infrastructure.

Since their latest campaign began on April 1, Just Stop Oil supporters have been arrested 1,900 times, with seven supporters currently in prison.

The stunt came just a day after campaigners in Germany covered a £96million Monet painting with mashed potato.

Most of the group’s funding for recruitment, training, capacity building, and education comes from Climate Emergency Fund.

Just Stop Oil also receives donations from members of the public who support the campaign.

In April 2022, it was reported that their primary source of funding was donations from the American-based Climate Emergency Fund. Through that fund, a notable donor to the group has been Aileen Getty – a descendant of the family which founded the Getty Oil company.

According to their website, these donations are used for ‘food, accommodation, and travel costs.’

What are their key aims?

Just Stop Oil wants the UK government makes a statement that it will immediately halt all future licensing and consents for the exploration, development and production of fossil fuels in the UK.

‘The scientific evidence is unequivocal: climate change is a threat to human wellbeing and the health of the planet,’ their website says.

‘Any further delay in concerted global action will miss a brief and rapidly closing window to secure a liveable future.’

The group demands investment in renewable energy and asks for buildings to have better thermal insulation to reduce waste.

Just Stop Oil also raises awareness of and encourages people to cut down on the usage of oil-powered vehicles, such as planes and private cars.