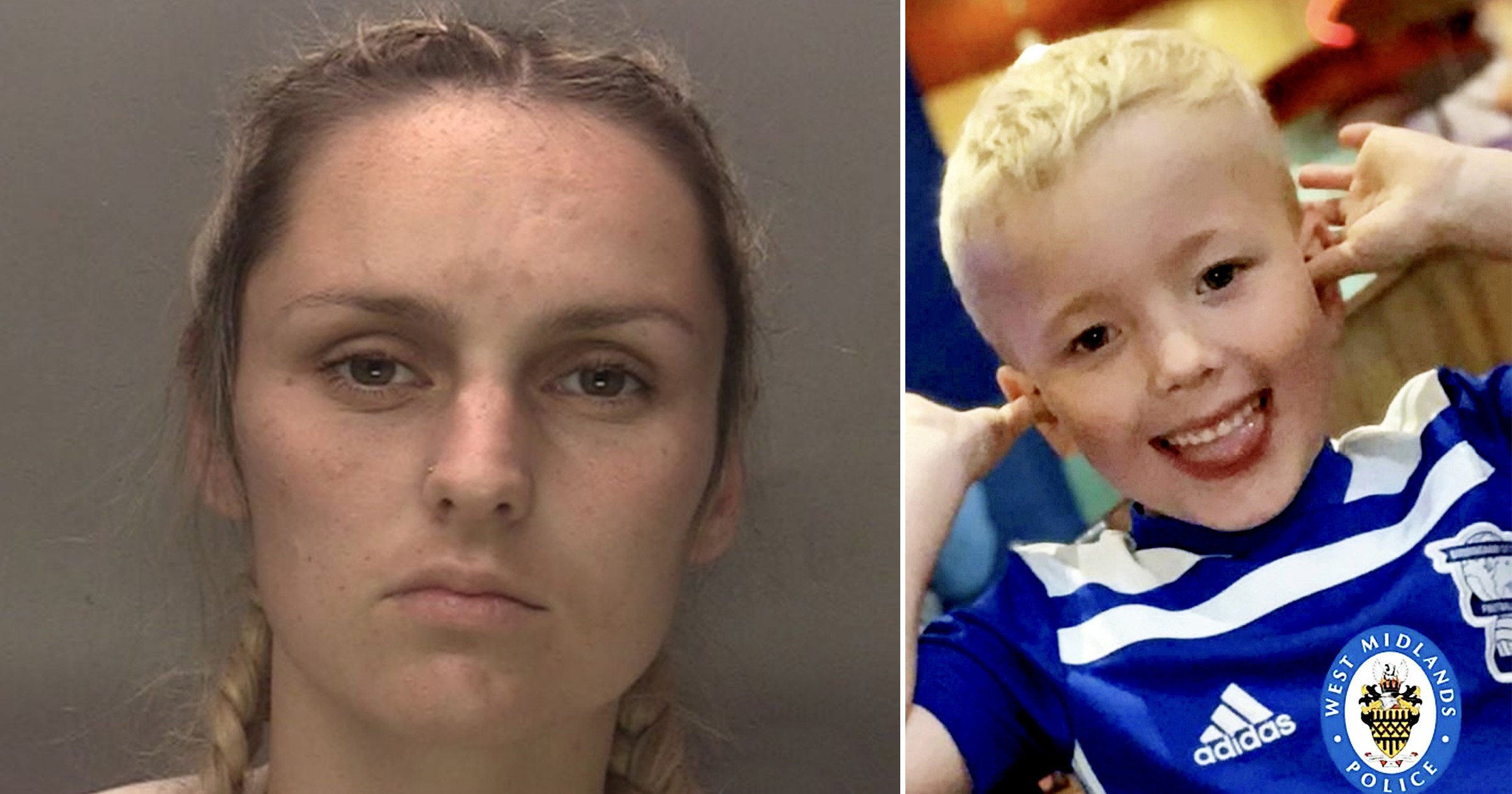 The ‘wicked’ stepmother convicted of murdering her partner’s six-year-old son during a ‘campaign of appalling cruelty’ whinged at being threatened and attacked in jail in the lead-up to her trial.

Emma Tustin, 32, inflicted an ‘unsurvivable brain injury’ on Arthur Labinjo-Hughes at her home in Cranmore Road, Solihull, after violently shaking him and repeatedly banging his head against a wall.

She then callously took a photo of him as he lay dying in her hallway and sent it to his father, 29-year-old Thomas Hughes, who was found guilty of manslaughter at Coventry Crown Court after encouraging his own son’s killing, including sending a sick text to Tustin telling her to ‘just end him’.

Tustin also poisoned Arthur by force-feeding him salt-laced meals, and it has since emerged that she had ‘salt thrown at her’ by other inmates while on remand at HMP Peterborough awaiting trial.

An HMP Peterborough spokesman said: ‘We do not comment on individual prisoners.’

Tustin and Hughes were described in court as ‘utterly ruthless, unthinking and pitiless’.

Prosecutor Jonas Hankin QC told jurors Tustin had developed a hatred for Arthur and viewed him as an ‘obstacle’ to her relationship with his father.

After his death, little Arthur was found to have 130 injuries all over his body after being hit, slapped, kicked, punched, and beaten, ‘over and over’.

He was also forced to stand in the hallway in a ‘model posture’ likened in court to a soldier on guard outside Buckingham Palace for up to 14 hours a day.

Haunting audio and video clips recorded in the final weeks of his life revealed he could barely speak and was no longer able to support his own weight.

Despite this, Tustin faked crying in front of police officers sent to her home and cruelly tried to blame the boy for causing the injuries himself.

The killing caused national outrage when footage emerged during the trial of Arthur crying out that ‘nobody loves me’ while struggling to carry a duvet just hours before he died.

In an earlier clip, he could be heard screaming and moaning: ‘I’m scared, I’m scared.’

It can now be reported that Tustin moaned at having to live in fear while locked up awaiting trial for the ‘evil’ murder.

As well as being targeted with salt, she was also threatened with violence by fellow inmates.

During a pre-trial hearing in April 2021, Tustin’s barrister said her client had been receiving ‘significant and substantial threats’, although it is unclear if she was at the same prison at the time.

Speaking at a hearing on April 15, Mary Prior QC said: ‘She has had a significant deterioration in her mental health.

‘There are significant difficulties for her in that she is currently housed in an environment where she is not receiving medication.

‘And she is receiving substantial and real threats – and violence.’

Ms Prior said Tustin’s legal team had ‘done all we can’ to urge the prison authorities to ‘make it plain’ to safeguard their client’s health and wellbeing, including writing to the governor.

She added: ‘There are weekly conferences, and they consist almost entirely of an overwhelmed young lady who is receiving significant and substantial threats and minimal medication.’

Ms Prior told the presiding judge at the time, Recorder of Birmingham Judge Melbourne Inman QC, she had felt it ‘necessary to say it in open court’ because ‘nothing is changing’.

Speaking at the time, Judge Inman said: ‘The prison estate, I know, are very good at maintaining medication and treatment for those in their care.

‘All I would say is, if there are concerns and problems, the court should be kept informed and, if necessary, we can make inquiries to assist.

‘That is not meant as a criticism of anybody but, obviously, if matters of concern are raised with the court, we will do everything we can to assist – to make sure they are resolved.’

Tustin and Hughes will be sentenced later today.

Health officials are going to start charging for lateral flow tests at the end of June, according to a leaked document. In what is being…