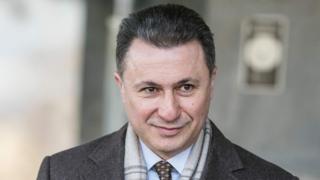 Former Macedonian Prime Minister Nikola Gruevski has been sentenced to two years in prison for corruption.

It was the first of five cases against the long-serving leader to go to trial.

He was forced to leave office in 2016 after a year of protests and 10 years in power.

Prosecutors used secret recordings to show that Gruevski had influenced a member of a tender commission to promote a particular car dealer to supply the vehicle for his personal use. In return for this, he was alleged to have received money from the dealer.

Gruevski was eventually forced out of office because of a wire-tapping scandal.

He was accused by rivals of personally ordering the tapping of up to 20,000 people. He also faces charges of involvement in vote-rigging and bribery during his decade as leader.

Earlier this week the current prime minister, Zoran Zaev, was cleared of corruption on a charge of taking a bribe to help a local businessman buy land.