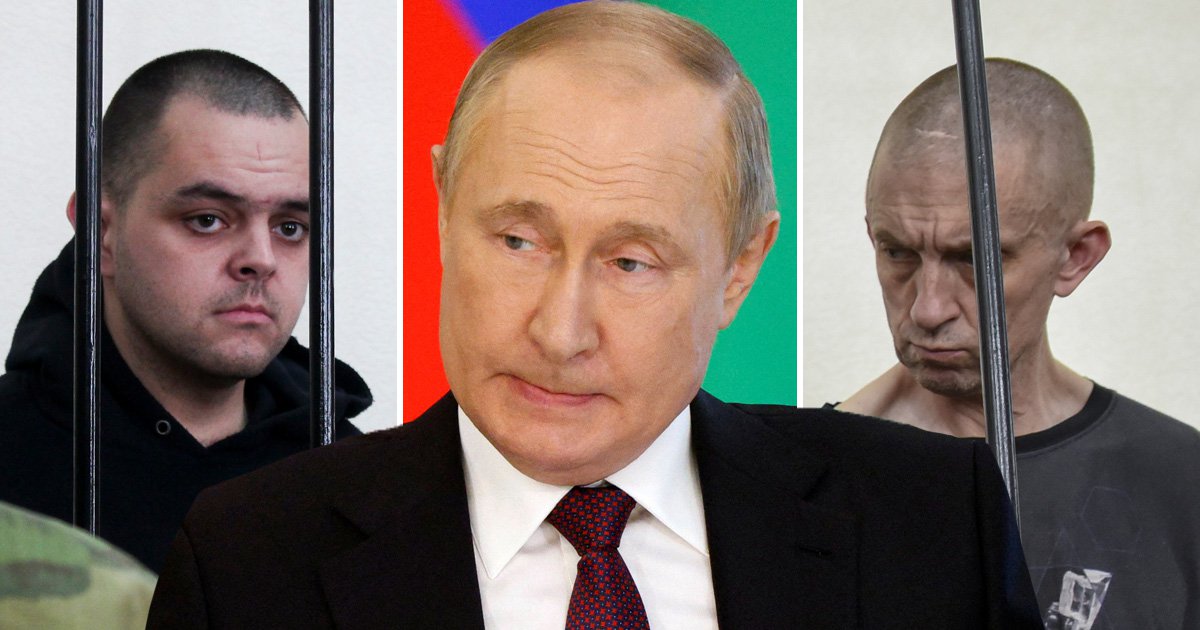 A friend of a British fighter captured by Russian forces while fighting in Ukraine says his death sentence could backfire on Vladimir Putin.

Aiden Aslin, 28, was convicted of taking action towards violent seizure of power at a court in the self-proclaimed Donetsk People’s Republic.

Another Brit, 48-year-old Shaun Pinner, and Moroccan national Saaudun Brahim, were also convicted after the three were accused of being ‘mercenaries’.

This was despite Mr Aslin having bot British and Ukrainian citizenship, having moved to Ukraine in 2017 and legitimately joining the country’s marines.

Brennan Phillips, an American former soldier who met Mr Aslin in Syria and worked alongside him in Ukraine, said the judgement is a ‘provocation’.

Speaking to BBC Newsnight, Mr Phillips said: ‘I think it will invigorate people more than anything.

Mr Phillips, from Tennessee, added that ‘many people expected’ Russia to choose ‘the most provocative stance that they could take’ – namely the death sentence.

‘I do not believe that Sean or Aiden will be subject to the death sentence or anything like that,’ he said.

‘I do believe that their captivity under the Russians will be extended for a little bit, but I do believe wholeheartedly and I’m very confident that they will be released safely back to their families.’

The UK Government has insisted the sentences have no legitimacy and the pair should be treated as prisoners of war.

‘But if, as everyone expects, they are not then they will be held as a diplomatic tool and I think the bigger picture here – what is happening – is that the Russians are going to become increasingly aggressive as part of the indirect conflict against the Baltic republics, against the Poles, against the UK and others who are close to the Ukrainian government and are supporting the Ukrainians in the conflict.’

Russian news agency Interfax claimed the men would be able to appeal against their convictions.

Howard Morrison QC, the UK’s Independent war crimes Advisor to Ukraine, said the sentence has likely been employed for ‘negotiation purposes’. He added: ‘I would hesitate to call it a judicial process, frankly.’

‘But if it is for negotiation, it’s difficult to see exactly what the subtext is,’ he added.

‘Because the British government isn’t holding any prisoners, it’s the Ukrainians who are holding the prisoners.’

Mr Morrison said the Government’s complaint that the men are prisoners of war who should be treated according to the Geneva Conventions is ‘spot on’.

Boris Johnson has ordered ministers to do ‘everything in their power’ to secure the release of two Britons condemned to death for fighting Russian forces in a ‘sham’ sentencing.

Ukraine’s ambassador to the UK, Vadym Prystaiko, suggested negotiations for a possible prisoner swap with Moscow were under way, as it emerged Defence Secretary Ben Wallace made a surprise visit to Kyiv for talks with Ukrainian President Volodymyr Zelensky.

A relative of Mr Aslin urged Britain and Ukraine to ‘do everything in their power to have them returned to us safely, and soon’.

They said Mr Aslin, 28, and Mr Pinner, 48, ‘are not, and never were, mercenaries’ and should be treated as prisoners of war, as they were fighting as part of the Ukrainian army.

Mr Aslin, originally from Newark-on-Trent in Nottinghamshire, and Mr Pinner were both members of regular Ukrainian military units fighting in Mariupol.

The southern port city which was the scene of some of the heaviest conflict since Putin’s invasion of Ukraine.

Mr Phillips said Mr Aslin had a well established life in Ukraine after arriving in 2017 and had not gone to fight there as a ‘thrill-seeker’.

He said: ‘He has a Ukrainian fiancee. They do have or did have a home outside of Mariupol and he was a part of the 36th Marine Brigade.

‘So, yeah, he had a well-established life in Ukraine, Ukrainian citizenship.’