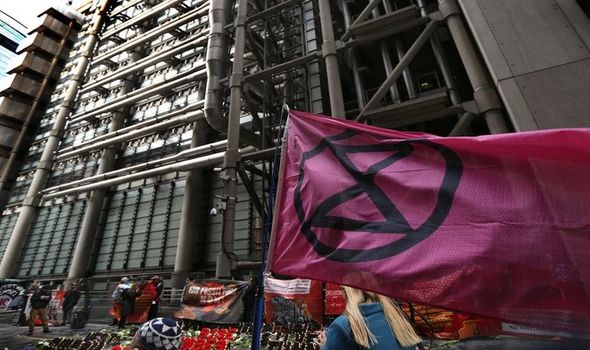 The eco-warriors, who preach non-violent direct action, have staged four major campaigns in London during this period, causing severe disruption by blocking roads and gluing themselves to buildings and tarmac. The latest protests saw activists block Oxford Circus and erect a giant table in Covent Garden across a two-week period in August and September this year. More than 130 people locked or glued themselves to roads and buildings.

A Freedom of Information request submitted to the Metropolitan Police has revealed this protest cost the taxpayer £18.1million.

A total of 27,239 officers were required to police the demonstrations and the disruption they caused.

About £4.5million of the total bill for policing the protests was spent on overtime with officers working long hours, with many having leave cancelled at short notice.

Another 10 people were arrested for assaulting police officers.

The latest Extinction Rebellion action came after previous protests in the City of London in April and October 2019, and September last year, which cost more than £50 million to police with 3,672 arrests.

During these demonstrations the group blocked Waterloo Bridge in London for more than a week, parked a pink yacht in Oxford Circus and stopped the distribution of 3.5million newspapers by blockading a printing press.

Campaigns of disruption also took place in Manchester and Cardiff in the last two years, costing the taxpayer even more money.

Before the latest protests in London, Met Police’s deputy assistant commissioner Matt Twist said: “Every police officer committed to a large demonstration is one extracted away from their borough.

“It is time spent away from the people of London in the parts where they are needed most – dealing with knife crime, domestic abuse and other crimes.”

John O’Connell, chief executive at the TaxPayers’ Alliance, said: “If these egotistical eco-warriors insist on terrorising working taxpayers, then perhaps they should be asked to pick up the tab for the endless disruption and costs to the public purse.”

The Met Police did not respond to our request for a comment on the policing costs of the August and September protests.