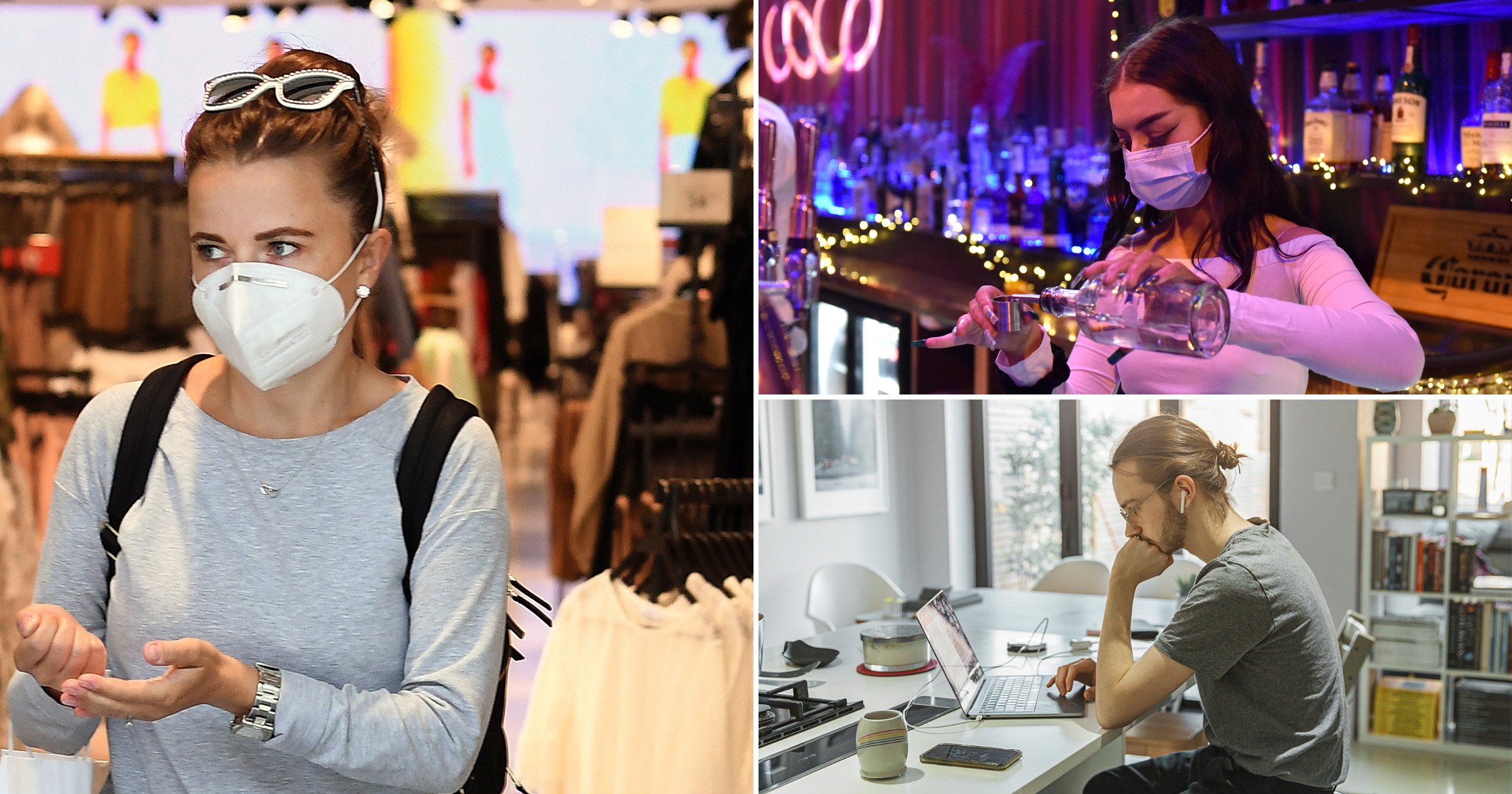 Face masks and working from home may have to remain after June 21 if cases of the Indian coronavirus variant continue to rise.

Ministers are concerned that the spread of the variant could scupper plans to lift all restrictions next month.

Business Secretary Kwasi Kwarteng admitted on Friday that the government ‘can’t guarantee’ the remaining legal limits on social contact will be removed in three weeks as set out, noting that if hospital admissions begin to rise again ‘we have flexibility to move that date’.

Current data suggests that although they are rising in some parts of the country affected by the Indian variant, overall admissions remain broadly flat.

The chief executive of industry body UK Hospitality, Kate Nicholls, said it was ‘absolutely critical’ that the remainder of the hospitality sector is allowed to unlock on June 21.

Ministers are reportedly discussing contingency plans for a partial lifting of restrictions.

The Treasury is said to be seeking to prioritise ending the ‘one metre plus’ rule and the ‘rule of six’ indoors, the Times reports.

Both are seen as vital to helping businesses in the hospitality and retail sectors recover.

In an attempt to reduce the spread of the virus, the requirement for masks on public transport and indoor spaces may remain in place.

Guidance suggesting people must work from home where possible may also stay, according to the Times.

Prime Minister Boris Johnson is expected to decide which restrictions can be lifted within the next two weeks.

On Friday, the UK recorded more than 4,000 coronavirus cases – the highest number since the end of March.

As many as three-quarters of all new infections are now thought to be the Indian variant.

Meanwhile, the reproduction number – the R value – for England is 1 to 1.1, up from 0.9 and 1.1 the previous week, suggesting the epidemic is growing.

Some experts have suggested the road map should be delayed until more people have received both vaccine doses.

Professor Andrew Hayward, from University College London and a member of New and Emerging Respiratory Virus Threats Advisory Group (Nervtag), said people who have only had one dose could end up in hospital, even if they were young.

He told BBC Radio 4’s Today programme: ‘On top of that, we are seeing a
doubling of cases (of the Indian variant) every week, and at a very minimum estimate it’s about 7,000 cases last week, it only takes five or six doublings for that to get up to say a quarter-million cases, and then you could set the pressure on the NHS and avoidable illnesses.’

Prof Hayward said when further restrictions were lifted ‘instead of doubling every week it’s likely to double more frequently than that of course, so I think there is a good argument for caution until such time as we’ve got a much higher proportion of the population double vaccinated’.

He said many people could still work from home ‘without it having any economic impact’, which would substantially reduce transmission of the virus.

Others say there is no reason why restrictions should remain in place when vaccines are doing so much of the heavy lifting of controlling the pandemic.

Fellow Nervtag member Robert Dingwall said it is ‘hard to see any reason’ why June 21 cannot go ahead, adding that ‘hospitalisations may not be a very good indicator of the severity’ of infections, with indications that people are younger and less seriously ill.

He said there was a need to ‘break this link in our minds between “this is very transmissible, this spreads very easily” and “this is as dangerous as things were when the Wuhan virus first hit last spring”’.