Emmanuel Macron has told Ireland that France “stands with you” when it comes to dealing with the fallout of Brexit.

Speaking at a joint press conference in Dublin with the Taoiseach (Irish prime minister) Micheal Martin, Mr Macron said that “Europe will remain united” on the implementation of the Brexit divorce deal and the controversial Northern Ireland protocol, which he said was an “existential issue for the identity and solidarity of the European Union”.

“We will never let you down,” Mr Macron told Mr Martin. “Our common strength is the single market. We will stand with you.”

The Taoiseach said that when it came to the UK, “a positive and constructive future partnership is in everyone’s interest”

He added: “But it will only be delivered if there is a relationship of trust, and a willingness to deliver on commitments entered into.

“The EU has demonstrated commitment, patience and creativity in its work to implement the Withdrawal Agreement and the protocol.

“With the right political will, I believe that it will be possible to find sensible solutions to some of the outstanding issues, within the framework of the protocol.”

It was Mr Macron’s first presidential visit to Dublin, after he promised to visit all 27 EU capitals. A day of warm words had started at Aras an Uachtarain, the residence of the Irish president. There, Mr Macron was welcomed by Michael D Higgins, his Irish counterpart.

Writing in the guestbook, Mr Macron said Ireland “occupies a precious place in the heart of the European dream”.

He said France will “remain a faithful friend” to Ireland in future.

He wrote: “Because Ireland has constantly struggled in favour of peace, was a land of the silent before it became the land of the welcome because its society showed solidarity and is open, Ireland occupies a precious place in the heart of the European dream.

“Your invitation on this day to meet the minds which shape Ireland is a great honour and a source of inspiration. France is your closest neighbour within the European Union and will remain a faithful friend for the future.”

But tensions remain between the two countries over OECD proposals for a 15% minimum global corporation tax rate. Ireland, which jealously guards its long-standing 12.5% rate which has helped create a crucial mulit-national sector, is opposed to the idea. 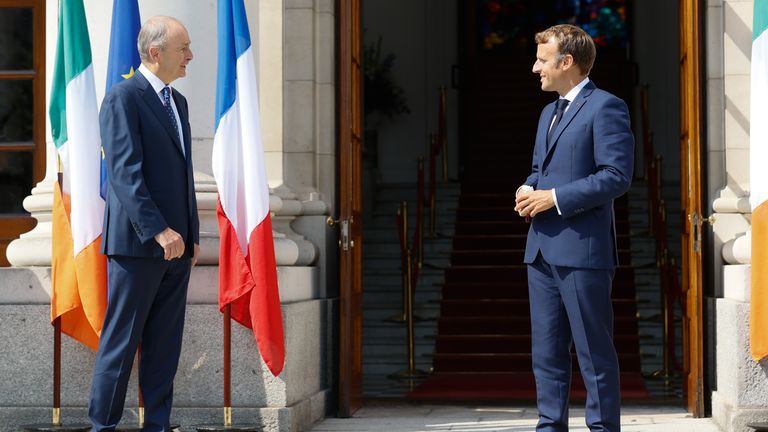 France, with headline tax rates closer to 30% is firmly in favour.

Sky News asked the French president if he was now putting real pressure on the Irish to accept the deal.

“I’m not one to put pressure on my friend”, he replied, gesturing towards Mr Martin. “We cooperate and we work very well together.”

“I think the OECD framework does make sense in such a context. And I want to believe that we will find the right path together in order to deliver a common framework and to deliver this minimal taxation because I do believe it makes sense.”

The Irish leader stopped short of agreeing but said that Ireland “will engage constructively in the process, and there’s some journey yet to go in relation to that.”

This evening Emmanuel Macron wraps up his visit with a return to Aras an Uachtarain, where President Higgins will host a reception in his honour.