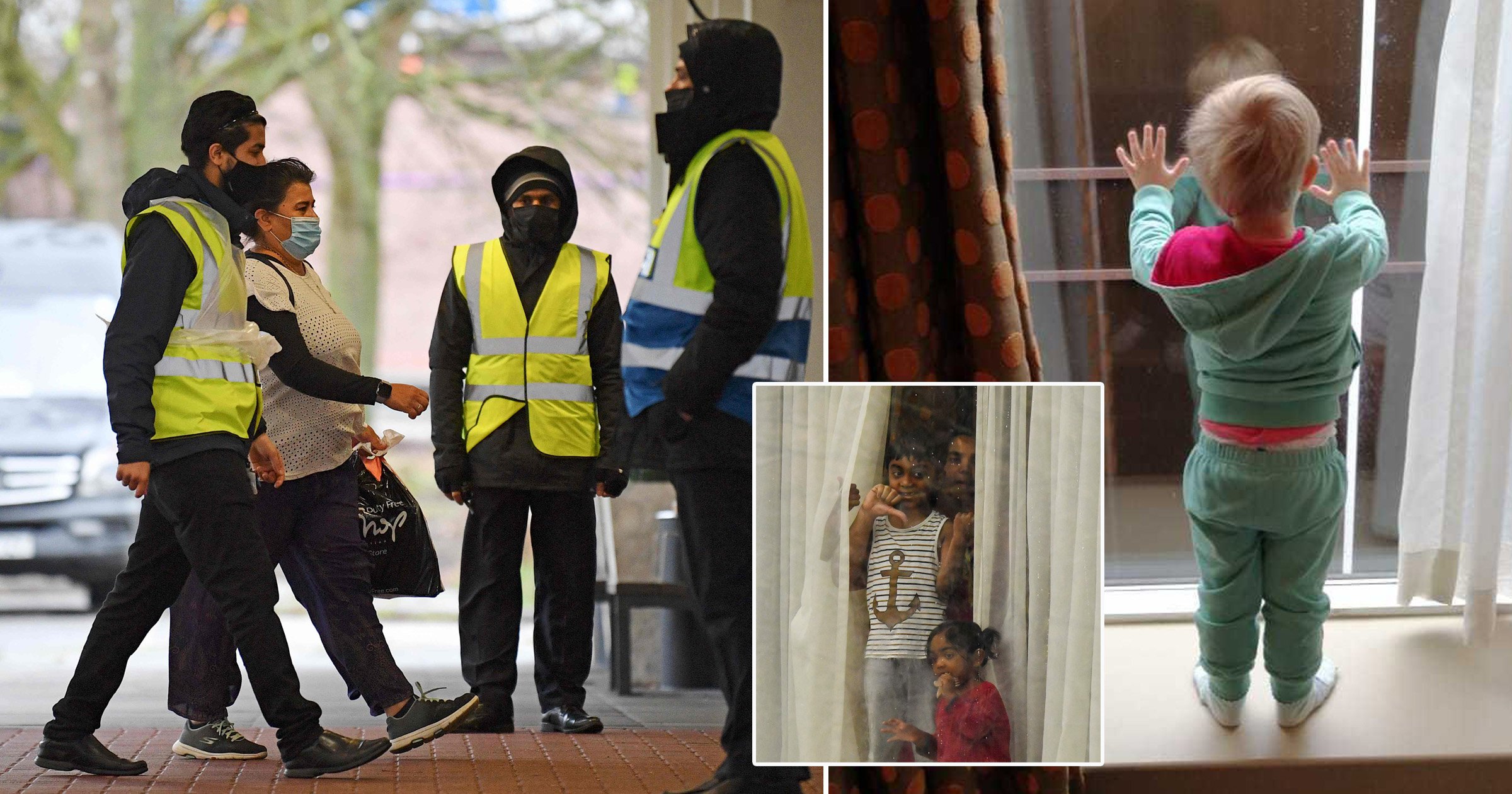 Families say they would be safer isolating at home than in a London hotel where they can be in close proximity with up to 40 people daily.

Guests at the Radisson Blu Edwardian, near Heathrow – including a mum with two young children – estimate around 200 people are now in the Government-approved accommodation.

They worry that rules allowing people out of their rooms for sanctioned outdoor breaks means they will pass near others in communal spaces because there is no one-way system.

Two families who spoke to Metro.co.uk are nearing the end of their first week in the 10-day quarantine period imposed on travellers from red list countries under rules aimed at preventing new Covid strains from reaching the UK.

Faiza, 33, is in a twin room with her 52-year-old mother, Hawa, after visiting Kenya to say a final farewell to a gravely ill relative who later died.

They were among the first intake to arrive at the hotel after flying back via Dubai and Frankfurt.

They say they were due to return before the quarantine rules took effect on Monday, but Emirates cancelled two flights.

This means they had to pay the Government’s set quarantine fee of £1,750 plus an extra £650 for an additional adult in the same room.

Faiza said: ‘There are people arriving all the time and a security guard said there are around two hundred people here.

‘There is a lot of security too as the hotel is massive. If I was allowed to self-isolate at home I would be a lot less exposed to people.

‘We have to leave the room for fresh air because the windows don’t open. We can go to the car park and sometimes deliveries come through the back. There’s also a succession of security guards who take you to the car park.

‘Then there’s the staff who leave the meals outside your door who have to come into the corridors.

‘I’m exposed to at least thirty or forty people a day and while we maintain a distance that wouldn’t happen at all if I was at home.’

The pair had flown out to say farewell to Faiza’s 97-year-old great-grandmother in Kenya.

Hawa, from Manchester, broke her leg shortly before the pair arrived back in the UK and has been given a wheelchair, although she and her daughter have asked for crutches to help her move around the room more easily.

They previously told The National how they pleaded with the airline to allow them home before the quarantine rules came into force.

Faiza, from east London, who asked to be known by her first name, is spending the time watching television, going on her phone and exercising outside with her skipping rope.

She said: ‘I feel sorry for people with three or four children in a room who are passing other red list people in the corridor, as well as security guards, when they go outside. If we were at home none of this would be happening.

‘There are no markings for social distancing showing where you can stand and things like that. You get passed from one security guard to another to go to the outside area, which is already being used by other people.’

A mother-of-two is waiting it out at the hotel to join her husband in the UK for the first time after being granted a spousal visa following 12 years living in the United Arab Emirates.

The South African national, who asked not to be named, is isolating with their six-year-old son, two-year-old daughter and British mother-in-law.

They flew into Heathrow from Dubai via Frankfurt with Luthansa after a nine-month wait for the paperwork to join her husband near Southampton.

The relocation coincided with the new rules and they were unable to book an earlier flight on Sunday because there were no seats left.

The woman said: ‘The room is not too bad, it’s nice and warm but the food is a problem as my son is allergic to nuts and raw egg and raw flour.

‘Pretty much everything has nuts in so we are saving the croissants, yoghurts and fruits from breakfast.

‘A lot of people are complaining because there’s no shampoo or conditioner like you would get in a normal hotel.

‘The hotel doesn’t clean the rooms which with two little ones can get quite messy so we’ve also asked for a hoover and the correct cleaning equipment for the bathroom.

‘The guards are quite friendly, they are doing their best.

‘But every time you go for a walk you pass at least ten guards and people from red-list countries in the hallway and outside there are usually four or five people having a smoke or a workout or walking around. There’s no one-way system in the hallways, people just go where they need to go.

‘There’s a lot more exposure than you would have at home.’

The woman, who is preparing to join her husband in Hamble-le Rice, has also been told by a security guard there are around 200 people in the hotel.

She said: ‘It’s not easy for the little ones to be cooped up all day.

‘My son is autistic so it’s been very hard for him to be inside all the time.

‘He’s got a computer but it’s not good for him to be stuck inside the room. We do try to take him outside about once a day but we are worried about him being exposed.’

The woman added: ‘Where I come from in Dubai they have ankle bracelets which would be a lot cheaper and easier.

‘One lady lives about three blocks from the hotel, so people who live in a certain radius could be allowed to go home.’

The UAE is on the ‘red list’ of 33 countries from where passengers must go into quarantine on arrival in England.

The rules have been imposed in an effort to guard against new Covid variants and better keep track of any new cases that might arrive in the country.

A Department of Health and Social Care spokesperson said: ‘As set out in law -travellers who are quarantining within a managed quarantine facility must stay inside their room for ten days and are only allowed outside for a very small number of exceptional circumstances.

‘Security staff at hotels are in place to ensure people abide by the rules and we expect all staff to be fully trained in Covid-secure practises, with contractors asked to provide Covid-secure facilities, including using PPE where necessary.

‘People can only leave their room for exercise when permitted to do so by an authorised person, and must comply with the requirements set out by that individual, including remaining in a strictly specified area.’