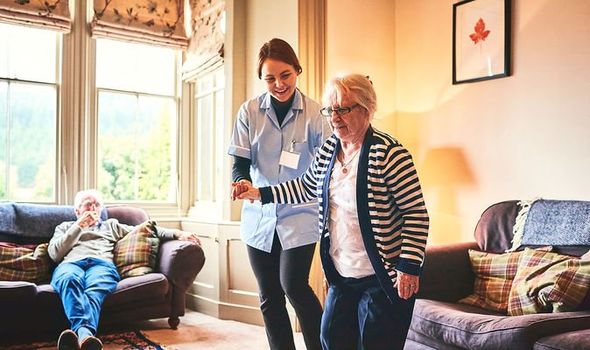 One in five searched for longer than two months and one in 10 had to wait longer than four months or could not find a provider at all. This leaves the NHS picking up the bill as pensioners well enough to leave hospital are left bed-blocking for months. And there is also a nasty financial shock in store, warns new research. More than a third (35 percent) of people think a bed in a care home would cost less than £400 a week. Around 15 percent expected care at home, where a care worker regularly visits the home of a person who needs support, to cost less than £200 a week.

One in ten even thought this type of care would be free of charge.

But the figures are in stark contrast with data from Age UK, which estimates that residential care can cost between £600 and £800 a week.

Even the most basic level of at-home care could cost around £270 for 14 hours of care each week.

Caroline Abrahams, charity director at Age UK said: “A lot of people’s first experience of the care system is during a time of crisis, following a sudden change in their needs and people are unaware of how the social care system works or what may, or may not be available to them.

“We know things are so bad in some places that it is becoming impossible to source care, even if you can afford it personally.

“Certainly, the idea that there will always be a care home or home care agency able to help you in your neighbourhood is not the reality for growing numbers of people.

“There are genuine worries that as we look toward next year we are seeing the prospect of total system collapse in the worst affected areas.

“Millions of older and disabled people depend on social care to stay safe and well while living their lives on their own terms.

“When good care is available it makes a fantastic difference, however, this is something that is not readily available.

“The money the Chancellor pledged in the recent Spending Review was welcome but this will only paper over the cracks for a while and is not a substitute for the long term plan and sustainable funding model social care badly needs.

“Obviously there are other very pressing things for Ministers to think about at the moment, but while ‘Brexit sucks all the political oxygen out of the air’ millions of older people who need care are having to make do with a care system that’s way past its sell-by date.”

The findings, exclusively released to the Daily Express by the UK’s first care comparison website Care Sourcer, also revealed significant regional discrepancies in terms of how difficult it is to find care.

Families in Wales have to typically search for 42 days to make sure their loved one has the help they need.

This compares to only 20 days in the North East

The survey of more than 2, 000 people who have experience of the UK’s crisis-hit social care sector found people facing a series of challenges.

Almost one in three (29 percent) had contacted more than four care providers before finding appropriate support and 20 per cent had to settle for a care home provider that was located more than 15 miles from their home.

Nine percent had to go even further, only being able to find a care home more than 30 miles away.

Andrew Parfery, the chief executive of Care Sourcer, said: “The results are clear – Britons are clearly underestimating the realities around finding and funding care.

“Not only do they expect care to be found much more quickly and easily than is really the case, in many instances they are having to eventually settle for care that is located much further away than they would have hoped.

“Part of the issue is that our care system is struggling. There is a missing link between providers and those seeking support.

“We think technology can be the answer by matching people to care providers in their local area and within just a few hours.”

Four in 10 people are supporting their loved ones with informal care on top of the formal help they already received.

Others are spending their own money with 13 percent spending more than £50 a month just on travel expenses to visit loved ones in care, while three per cent fork out more than £100

When it came to what people valued most with care, half of those surveyed say staff competency and compassion was the most important deciding factor (excluding location and cost) when sourcing care for a loved one.

However, stress, depression, anxiety and sickness are highly prevalent amongst care workers in the private sector.

And this impacts their mental wellbeing and makes the already challenging job of caring for people in need even more difficult, experts say.

To help tackle this issue, Care Sourcer has launched an Employee Assistance Programme free to all care providers.

The confidential service, funded by the FTSE 100 financial services company Legal & General, covers a wide range of issues including mental or physical stress, bereavement of residents they have formed close bonds with, money worries and general low morale.

The social care crisis continues to worsen and, as we approach winter, there is still no sign of the Government’s proposals to address our country’s broken care system.

The need for care is rising, as our population ages, while the funding per person has been falling, so increasing numbers are left without the care they desperately need.

But it is not just about lack of money.

The care system’s inadequacies are also caused by lack of knowledge, information and understanding of how our system works.

This Survey evidence, highlighting that it often takes many weeks just to find homecare or a care home, is a stark reminder of the knock-on consequences of the care crisis for vulnerable older citizens, their families and our National Health Service.

Social care is not just about elderly people needing basic help with their everyday lives, it affects their loved ones too.

If it takes several weeks to organise the right care for family members who are stuck in hospital as they can no longer live independently, then patients who should not be in hospital will languish there, taking up precious beds, while waiting for the right care arrangements to be put in place.

The Survey shows people do not generally realise how long it takes to organise care.

The common view that it takes less than a week is a significant underestimate – with average times being more like a month.

This has implications for the whole health and care system.

Elderly person may pick-up infections on hospital wards, their families will be stressed by the difficulties of finding the right care, others may have operations cancelled if hospital beds are not available and the NHS has to cover unnecessary extra costs for patients who should not really be there.

It is estimated that costs of such delayed discharges, as patients wait for care to be arranged before they can leave hospital, costs around £3billion a year, (or about £8m every day).

What a waste of precious NHS resources and public money.

It is absolutely vital that the Government and local authorities get together to introduce meaningful reforms of the care system and also launch widespread information campaigns to help families find the care their loved ones need as quickly as possible.

• Baroness Altmann is a campaigner and former Conservative Pensions Minister

NIKKI Blackborow was shocked and dismayed at the length of time it took to find care for her elderly mother and stepfather.

Her mum Penny Robertson, a former deputy headmistress, was left languishing in a Gloucestershire hospital for weeks, racking up a huge NHS bill and preventing more needy patients from taking up a bed.

The teacher, 54, from Southgate, north London, was left frustrated and irritated by the complexity of the social care system, the lack of advice for families like hers and the slow pace at which everything moves.

“I had no idea that finding care for two frail pensioners would take so long or cost so much,” she said.

“My mum, who was 74 at the time, was admitted to hospital in 2017 after a choking incident and it became apparent that she couldn’t go home to live with my 80-year-old stepfather.

“But that meant he couldn’t stay in their flat as he suffered from Alzheimers and relied on her.

“My mum was treated for the choking incident and could have been discharged almost immediately but she stayed on the ward for three weeks.

“She didn’t want to be there, we didn’t want her there and I’m sure the medics didn’t either. Goodness knows how much that cost the NHS.

“In the end, my sister and I took her back to her flat and cared for her there for almost another two weeks before we found a respite care bed for her.

It also cost £1,400 a week for a place in the same home for Mrs Robertson’s husband Ian, who unfortunately could not cope with the upheaval and died in January of this year.

“We then had to move mum into a nursing home, which was the same price.

“We had to sell my mum’s flat to fund the care, and even though we battled and won Continuing Health Care, which now pays the home fees, we now pay £1,000 a week for private carers to sit with her from 9am until 8pm as there isn’t a lot of stimulation in the home.

“We are well-educated, articulate resourceful people and we know how to argue our case.

“I hate to think how people like my mum get on if they have no one fighting their corner.

“We found the system slow and simply not fit for purpose.”