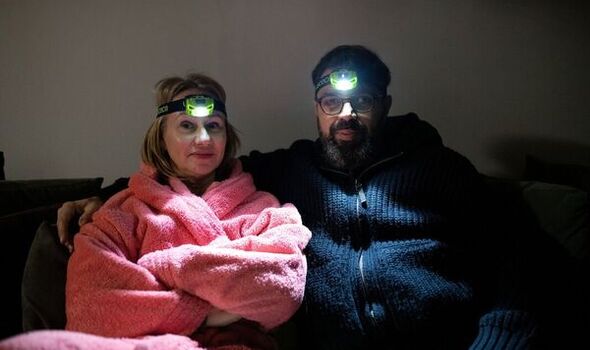 A dad who introduced a “no electricity at home” policy only has the heating on once a week and has forced his family to wear head torches to save money on their electricity bill. Chavdar Todorov, 53, decided to take drastic action when his family recoiled in horror as their bill more than doubled in price to £320 a month.

Chavdar came up with the genius idea to use head torches to avoid turning on their lights at home.

Now he, his wife, Moda, 49, and their children – Teo, 14, and Nicole, 20 – hope to save as much as they can on their electricity costs by keeping their usage to a minimum to reduce their annual £3.8k bill.

The family is limiting their heating by only turning it on once a week, and keeping warm by wrapping up in coats and blankets.

The head torches, which turn on and react to movement, are used in the evenings to get around in the dark.

Moda, a yoga teacher, from Barnet, London, said: “We’re trying to think positive but it’s hard. I don’t put the heating on if I’m home alone and just keep my jacket on. My husband came up with the funny idea of using head torches.

“We keep the lights off and use our head torches but it’s scary and I don’t feel as safe. There have been a lot of burglaries in our area. We light candles and try and make it romantic.”

Moda – who is originally from Bulgaria but moved over to the UK in 2004 – is being forced to hardly put her heating on to try and avoid the rising costs of her energy bill.

“We don’t know yet what it’s gone up to again but we’re trying to do everything we can to keep it down.

“We wrap up in blankets and coats and only put the heating on about once a week just to get some heat through the house.

“Our back door isn’t very insulating and you can really feel the cold and wind.”

Chavdar, a banker and decorator, thought to buy £8.48 smart headlights to use instead of having their lights on at home.

Chavdar said: “It’s like we’re back in the 18th century. We don’t know what the bill is going to be like at the end of the month so we’re doing everything we can.

“I can now wear the headtorch and get around without switching on the lights. We’re reducing our TV watching and only having it on sometimes. We can only do everything we can.”