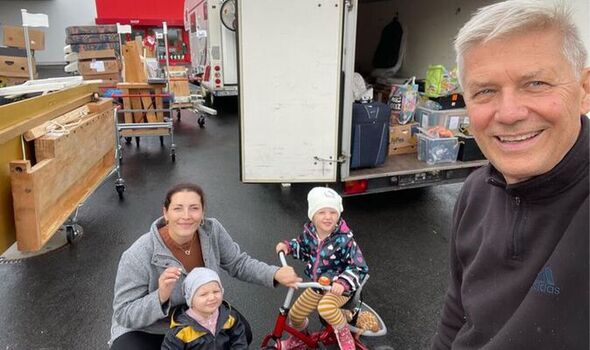 A family has shared their distress after travelling 900 miles to the UK, only to have their “precious” memories stolen four days later. Dominique Herbst, 37, along with her husband Knut, 72, and their two children decided to pack up their old life in Berlin and head to Liverpool in a motorhome. Four days after arriving the trailer connected to their motorhome was stolen on Nicholas Road in Crosby, on Monday October 24.

According to Dominique, it contained everyday household items and memories that “can’t be replaced” including family photographs, important documents, and her children’s toys. Dominique said that after speaking to the police she was told to “look for it” herself.

She was even told by an officer to contact the local council to acquire CCTV footage of the incident and to knock on houses on her own to see if anyone had information. Speaking to the Liverpool Echo, she said: “We went to the city for some house viewings, came back and someone had taken everything we own. The only thing they did not take was our passports.

“English is not our first language so we were very nervous when the trailer was taken. The police officer did not understand me, she kept asking if I was in the trailer and of course I was not in the stolen trailer. The police have just not helped.”

Dominique an online marketing manager had lived with her husband Knut in Liverpool two years previously and said she “loves the area”. The family had been planning to live in the motorhome until they found a permanent residence.

Since the incident, they have parked their motorhome on a neighbour’s drive on Nicholas Road and have been given “hot showers” and food. Dominique that the kindness shown to them has been a “big help”.

Dominique who is from Berlin said: “We are parked on a neighbour’s drive and we come in to have breakfast. The kids are playing with their family it is a big help.

“It has been horrible for us but I am a mother I have to smile. I don’t know what to tell the kids, she keeps asking why someone stole her toys. This was supposed to be a new chapter in our lives but will still want to give Liverpool a second chance.”

A spokesperson for Merseyside Police said: “We can confirm we received a report of a theft of a trailer in Blundellsands. It was reported on Friday 28 th October that a white trailer had been stolen from outside a property on Nicholas Road.