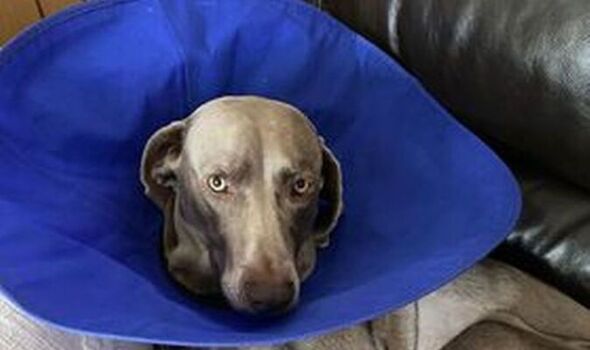 A family had to fork out upwards of £7,000 to save their dog’s life after he swallowed a rock.

Milo the Weimaraner’s loved ones became concerned when he began vomiting and passing blood, and they quickly rushed him to the vet on October 23.

The vet asked if the four-year-old had eaten something he was not supposed to.

However, owner Shannon Stone said Milo, who still acts like an energetic puppy, sometimes chews socks around the house, but she had not seen Milo eat anything untoward.

The vet could see Milo’s tummy was upset, and a scan discovered a rock in his lower intestine, reports Wales Online.

Shannon, from Porth in Rhondda, Wales, said: “They gave us the options of taking him home with pain medication and seeing if it would pass or leaving him there under observation.

“Obviously we left him there to be sure. We had a phone call later that night that he needed life-saving surgery to remove the rock.”

Milo, who lives at home with Shannon and her mum and dad, went under the knife to remove the rock at the Valley Veterinary Hospital in Taffs Well that same night and returned home on October 26.

However, it was only a short visit home as he had already started to deteriorate.

“That first surgery cost £3,500,” said 21-year-old Shannon, adding: “But he had the surgery and he wasn’t doing well, he came home and he started deteriorating so we took him back in and he had to have another surgery to remove a larger section of his lower intestine as he was battling sepsis.

“In that moment you just can’t think. He is only four, his life has only just started.”

Shannon added: “He is such a character, we all love him so much, my dad is his favourite and he treats him like a child.

“He wasn’t eating in the vets, they wanted him to come home and as soon as he did he started to eat, he just wanted to be home.

“He acts like a puppy, he is so energetic. He is doing so much better now but he doesn’t understand he needs to rest, he wants to run and play. And he hates his cone.”

Milo is set to see the vet again on Monday afternoon when they will assess if his recovery is going well, but Shannon said she was hopeful as he was back to himself and feeling happy to be home.

They have not seen the size of the rock that has caused all this damage but expect to see it then.

The family dog was covered by pet insurance but only up to £2,000, so they are desperately trying to find the remainder of the money to pay the vet bills that saved his life.