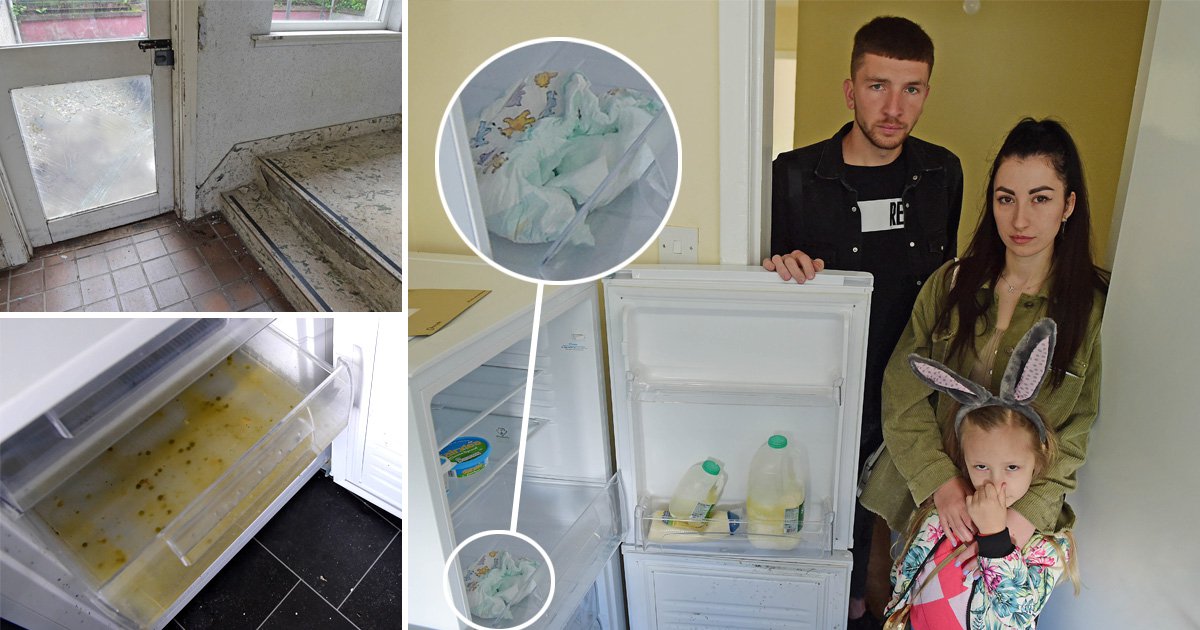 A family fleeing war-torn Ukraine have been housed in a dirty Scottish council flat which has an old nappy in the fridge, it has been claimed.

As they fled, they spent two days in a bomb shelter before travelling 900 miles to join Ruslan, who had managed to flee to Poland.

On arriving in the UK, they were all meant to be housed in a council flat near Glasgow – but it was too filthy, the Daily Record reports.

The family have instead been forced to squeeze in with Stephen Ross and his wife Tamara who live in Lanarkshire.

Stephen said: ‘After all they have been through, I could not have allowed them to stay their first night in filth.

‘I was horrified when I opened the fridge and there was an old nappy in it, beside congealed milk and butter.

‘The freezer is full of dirty water with horrible bits floating in it and the cooker is disgusting.

‘There are old sweet wrappers and crisps under the couch cushions.

‘I am astounded no one thought to have the place cleaned before a family arrived here from a war.’

Valeria and her family were assigned the two-bedroom flat and she said the stairs were difficult for her disabled father to climb.

Stephen said: ‘They managed to get on a train but it was a terrifying journey, not knowing if they would be shot or bombed. Valeria was traumatised and it was an enormous struggle for her to get her little girl and father to safety.’

Stephen said the family need to be moved to be closer to him and Tamara.

He added: ‘They need to have us close by as their support network – they have left their lives behind and have nothing.

‘They need to live in East Kilbride.’

Valeria added: ‘The Scottish people have been so kind and we are grateful to them but it is so upsetting to find my family in a flat which is so filthy and my father will not cope with the steps. I did not expect a lot but I thought it would be clean.

‘I thank Scotland for giving us safety but this has been very sad and we are desperate to stay in East Kilbride because I really need to be close to my mother who will be so important in helping us rebuild our lives.’

A spokesman for South Lanarkshire Council said: ‘We were alerted that the family were coming in under the Family Sponsor Scheme and would be presenting as homeless on a Sunday evening.

‘To try and help and to avoid the family having to present to our out-of-hours service, our homelessness team sourced suitable accommodation.

‘We accept the fridge was not in a suitable condition and can only apologise for that.’