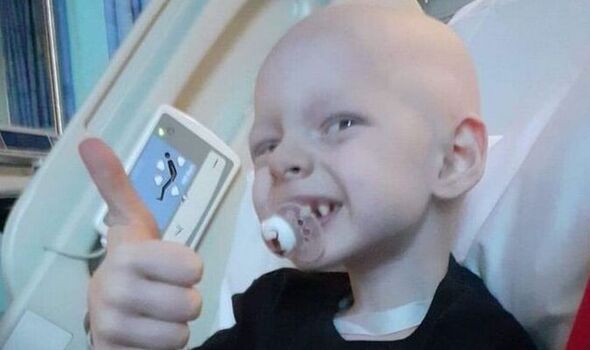 Arthur started complaining of stomach aches when he was three and started experiencing what his family thought was constipation. His parents took their “beautiful, smart and funny” little boy to doctors when his stomach troubles did not improve.

His grandmother Sharon Currie, from Blackley, told Manchester Evening News that Arthur was going to see doctors “for months and months” before they diagnosed his illness.

However, doctors eventually made the tragic discovery that Arthur was not suffering from constipation but was in fact struggling with a rare form of cancer.

The little boy was diagnosed with stage four clear cell sarcoma of the kidney on October 16 2020.

His grandmother said it took them a long time to get to the bottom of her grandson’s cancer, which has spread to other parts of his body including his bones and spine.

Ms Currie said: “It took them a few weeks to figure out which cancer it was.

“It started off with his kidney, and now it’s in nearly every bone in his body.”

Arthur, now five years old, has been going through chemotherapy and radiotherapy and has been in and out of hospital since he was diagnosed.

The little boy, who lives with his family in Bacup, Lancashire, has also been unable to go to school over fears that he could pick up coronavirus and other infections.

He has also been unable to enjoy the usual entertainment that is put on for children while in hospital due to the pandemic.

However, he was able to celebrate his fifth birthday last week with all of his favourite superheroes which he “absolutely loved”, his grandmother said.

Ms Currie said that now it is a “waiting game” to see if any other treatments will help Arthur after his condition relapsed at the beginning of this month.

She said: “It’s almost like I’m talking about someone else but it’s my grandson and I’m just heartbroken.”

Arthur’s parents were trying to have children for 18 years before Arthur was born. His sister Tabitha was born two years later.

The family are desperate for more research to be done into their boy’s condition which they said has not been widely researched.

Ms Curie said she was appealing for “someone somewhere” to help her grandson, adding: “There’s lots of research going on into children’s cancers but there’s not for this one.

“We need some sort of trial for this one to give him a life.”

She added: “In this day and age it’s just diabolical – children just dying for nothing,”

Arthur’s doctor had only come across the disease once before. Ms Currie said he is in contact with other medical professionals across the country to discuss possible treatments.

Ms Currie said there needs to be more awareness of clear cell sarcoma.

The grandmother has also set up a fundraising page to go towards “amazing memories for Arthur and his family”.

She said in a recent post following his relapse that “Arthur is oblivious and we want it to stay that way. Nothing is allowed to ruin his happiness.”

“He looks fit and healthy but he’s not. He looks a bit pale. But looking at him you wouldn’t think he’s got this illness.”

If you want to donate to Arthur’s fundraising page click here.