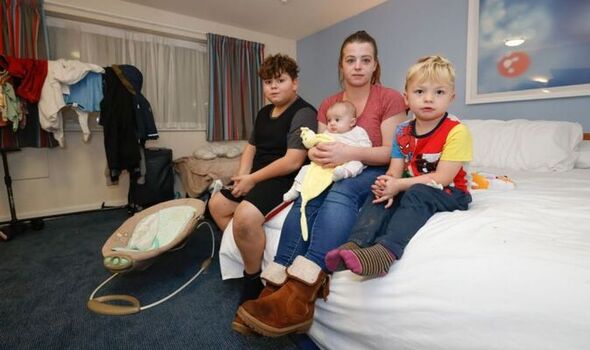 A mum who was going through eviction proceedings while her baby fought for her life in the hospital is now living in a hotel room with her three children.

For the past few weeks, Billie-Ann Wylie and her youngsters have been washing their clothes in the bath and surviving on food that can be prepared using a kettle.

After the landlord issued eviction proceedings, the 28-year-old, five-month-old Bella, four-year-old Albie, and eleven-year-old Harry were forced to leave their home, reports StokeonTrentLive.

Billie-Ann had built up rent arrears but says she withheld some payments when the ceiling in her living room collapsed due to a leak in the bathroom.

She says that when the court hearing took place, she was unable to attend because of regular trips to the hospital, where Bella was being treated for meningitis, and that the tribunal ruled in favour of the landlord and she had to leave the property in Biddulph, Staffordshire.

She is now stuck in a Travelodge in Talke, Staffordshire, and because she was considered to have made herself “intentionally homeless”, she says she is struggling to find new accommodation.

Staffordshire Moorlands Council has been paying for the hotel accommodation because, under housing and children’s legislation, she is considered to have a priority need.

However, funding has already been extended beyond the 56 days the council must legally cover, known as the “relief duty” period.

Soon Billie-Ann will have to leave the hotel, but she is burdened with significant debts and says she is struggling to find new accommodation.

She has no idea where she will be living by Christmas.

Billie-Ann said she “didn’t understand the letter” warning her of the eviction process.

She added: “I was so stressed about my baby daughter and the impact it was having on my other two children that I didn’t take it all in.

“All I want is to be able to make a nice home for my kids.

I don’t expect that everything should be given to me, I just want to be treated like a human being.

“If I had gone out and blown all my money on clothes and jewellery, then fine.

“But I used some of that money to fix some of the problems in the house and at the time my daughter was very poorly in hospital.”

She said Bella was given a slim chance of survival after contracting meningitis, and that she spent many weeks in the Royal Stoke hospital as a result.

While Bella is now doing well, the conditions the family find themselves living in are far from ideal.

Billie-Ann says that a microwave bought for her by her uncle – which she used both to sterilise bottles for Bella and to cook food – has been removed from the hotel room.

She added: “As it stands, we’re now having to eat Pot Noodles and sandwiches, and I’m struggling to afford it.

“I had a load of microwave food but now I can’t cook it because the microwave has been removed from the room.

“We are just living day by day.”

Under The Housing Act 1996, “a person with whom dependent children reside or might reasonably be expected to reside” should be considered as a priority case, regardless of the reasons for their becoming homeless.

The Homelessness Code of Guidance for councils says that “where a housing authority finds an eligible applicant has a priority need but is homeless intentionally and the relief duty has come to an end, they have a duty to secure accommodation which is available to the applicant to provide reasonable opportunity for them to find their own accommodation.

“The authority must also provide advice and assistance in any attempts the applicant might make to secure accommodation”.

A spokesman for Staffordshire Moorlands council said it had done everything it could to help Billie-Ann and was continuing to try to help her find accommodation.

The spokesman added: “Officers from the council’s housing and homeless advice teams have carried out thorough reviews into Ms Wylie’s circumstances.

“The council’s responsibilities under this duty include taking reasonable steps to help her secure suitable accommodation for at least six months – but that does not mean it must offer social housing or any other accommodation.

“The relief duty period ends 56 days after being accepted.

“Despite that relief duty period coming to an end, the council has continued to provide interim accommodation for the family and has agreed to help Ms Wylie with a deposit and rent in advance to help her secure alternative accommodation.

“The council funded the stay until 30th November 2022, this was three weeks longer than our duty.

“The council has continued to provide interim accommodation and has agreed to help Ms Wylie with a deposit and rent in advance to help her find accommodation.

“We have completed referrals to other agencies, proactively contacted letting agents and offered assistance under our bond scheme to assist with the costs of securing a new tenancy.

“We have also referred this to social services as is usual procedure in cases where someone is found to be in priority need but intentionally homeless.

“The council understands this is a difficult situation and will continue to support Ms Wylie as she seeks to secure a new tenancy.”