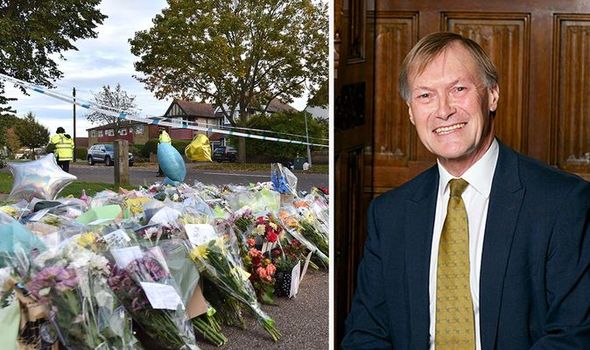 His widow Lady Julia and their five children released a heart-breaking statement just two days after the veteran politician was horrifically stabbed to death. They said: “Nobody should have to die in that way. Nobody. We are absolutely ­broken, but we will survive.”

The family praised him as “a patriot and a man of peace”. But they vowed: “This is not the end of Sir David Amess MP”, urging city status to be given to his Southend seat ‑ the Tory’s long-held ambition.

The family thanked well-wishers, adding: “In his memory, please show your support for this.”

The tribute to the beloved husband and father was issued by Scotland Yard last night, as police continued to question Ali Harbi Ali, 25, over the murder.

Sir David, 69, was stabbed up to 17 times as he held his surgery in an Essex church on Friday.

The family admitted, “Our hearts are shattered” but said: “Please let some good come from this tragedy.”

They added: “We have realised from tributes paid that there was far, far more to David than even we knew.”

The family urged people to keep his memory alive by supporting his favourite causes. The first was a campaign to support a memorial to Dame Vera Lynn, backed enthusiastically by Daily Express readers.

The second was the push to win city status for Southend, and they added: “In his memory, please show your support for this.”

The family paid a moving tribute to the Southend West MP, saying: “He was a patriot and a man of peace. Nobody should die in that way. Nobody.”

The statement came as police searched three London addresses linked to the suspect.

Home Secretary Priti Patel said Sir David “would always put Southend front and centre. I think of his last PMQs, questions to the Prime Minister…it was about Southend.”

Asked if granting city status to the resort would be the best memorial, she added: “People will decide about that. But clearly…it would be a wonderful tribute.”

House of Commons Speaker Sir Lindsay Hoyle said: “I think no better tribute would be ensuring that his constituency gets the city status. He requested it, he wanted it. That would be a good thing.”

He added that officials will discuss with Sir David’s family if they would endorse placing his coat of arms in the Commons, just as a plaque was installed in memory of murdered Labour MP Jo Cox.

Sir David’s close friend David Stanley said: “It is so tragic that…someone that has done so much for his people, is now going to be remembered for such a tragedy. He is a champion of the people, a champion of Southend.

“The legacy must be city status. But most of all, I want to remember him for the person who stood up for the people that were vulnerable. And that is perhaps what is less known about Sir David.”

Wes Streeting, Labour MP for Ilford North close to Sir David’s seat, said he “could think of no more fitting tribute” than for Southend’s city status to be “top of the agenda”.

Announcing a bid as part of the Queen’s Platinum Jubilee celebrations in 2022, Sir David had said last month: “If this is a fair competition, then Southend will be successful.

“City status would provide long overdue recognition of what we have to offer.

“The longest pleasure pier in the world, a huge wealth of local talent in the arts and culture industries and a centre of educational excellence.”

“I’ve been an MP 20 years, and during that period I see a lot of more nasty people around than ever before.

“They are willing to say and do things in a way that I would never have thought possible in this country.

“And we all have to be really aware and keep our wits about us.

“In the last few years I’ve had four or five incidents where I’ve had to report things to the police. And quite often they…literally don’t do anything, or the onus is on me to have to give endless statements which lead nowhere.”

The MP joined crowds of local mourners in laying a tribute of flowers.

He said: “David of all people didn’t deserve this to happen.

“What happened here was pure evil and it cannot be ignored.” Meanwhile Commons Speaker Sir Lindsay last night called for

politics to be kinder and more respectful.

He said the quality of political discourse “has to change” in the wake of the killing, which follows the murder of Jo Cox in 2016.

Sir Lindsay also called on social media firms to “get their act together” and deal with anonymous abuse that is sent online to MPs.