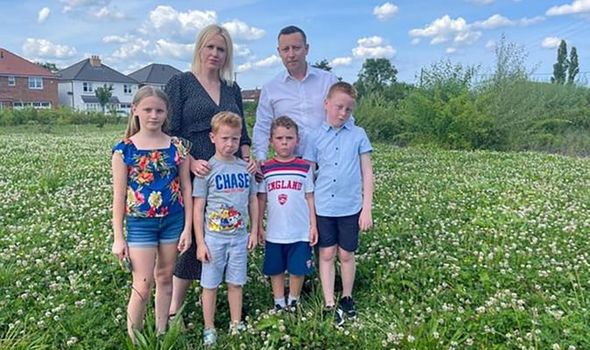 Rebecca Thompson and husband Chris bought their semi-detached home for £405,000 with one of the attractions being the landscaped area outside, where they thought their children Cameron, nine, and William, six, would be able to play.

Rebecca, 38, claims building company Avant said the green space would be a permanant fixture but that it is now a mess of churned up mud, bark chippings, uneven paths and weeds.

Speaking to Teesside Live, the mum of two claimed: “It’s literally like paradise had been crushed.

“I do believe we have been mis-sold. I don’t even think I could sell it, the state of the area.

“Literally it’s horrendous, it’s so embarrassing to live here and look out over it.

“We’re not paying the management fee because I think – what are we paying it for?

“I would like it to go back to a green space like it was, many residents do.

“It doesn’t matter how much you pay for your house; no one should have to live like this.”

Literally it’s horrendous, it’s so embarrassing to live here and look out over it. We’re not paying the management fee because I think – what are we paying it for?

The family purchased the new-build in Stockton-on-Tees, Teesside, in 2017 but Rebecca claims the green space was rotavated within one year after moving in.

Rebecca, a HR team manager, added: “It (the green space) was so beautiful, it was absolutely stunning.

“We have got two little boys, we thought it’s an ideal place for them.

“I couldn’t even look out of the windows, it was awful.”

The couple, in addition to other annoyed families in the complex, complained to Avant when the grass was first removed.

Rebecca said they were advised that the change to the landscape was in line with the approved local authority plans for the development, which she claims were not disclosed to residents.

At a loss and powerless to overcome the “approved plans”, Rebecca, Chris and their neighbours pleaded with the company to bring the site up to minimum standard.

Residents have urged them to adhere to what had been approved by Stockton Council by maintaining grass verges, managing weeds and ensuring planting was sufficient.

Avant has since handed over site responsibility to a management company and has now been bought out by Berkeley DeVeer.

Rebecca claims: “Avant’s ongoing and apparent wilful neglect of site responsibilities and maintenance, along with Stockton Borough Council refusing to take any responsibility for accurate planning enforcement has caused massive feelings of powerlessness, distress and utter despair to all residents.

“We have had a continued eyesore from 2018 of the shared landscaped areas, ultimately impacting resident wellbeing, removing a safe and open space for children to play, impacting property value and leaving residents like myself feeling completely duped and powerless.

“We don’t want to move; we would like it to go back to being green or for the actual plan to be enforced or managed right. Now we don’t have either of these.

“It’s been years of toing and froing and being fobbed off by Avant and Stockton Council.

“Stockton Council has a responsibility for enforcement and action with that plan and they do not care.

“It’s all just such a mess. Stockton Council has not done their job.

“We have been fighting so hard and not got anywhere at all. Nobody is taking accountability for this absolute eyesore.

“It just needs improving, it cannot get any worse.”

An Avant Homes spokesperson said: “Following a complaint from a Manor Gardens resident to the local authority regarding the turfed area not being as per the original plans and attracting playing children, we received a request from Stockton Council to return the development landscaping to the drawings that were approved at the time of planning consent.

“We therefore revised the development landscaping of the turfed area in accordance with the strict planning requirements and obligations required by the local authority.

“The landscaping of this area is now almost complete with grass strips still to be added to either side of the footpath. These works were regrettably delayed due to labour restrictions during lockdown and have been rescheduled for later in the year when weather conditions will make the ground more amenable to planting.

“The development was handed over to a property management company in 2020 which is responsible for the upkeep and maintenance of this area. However, Avant Homes has agreed to oversee the planting to ensure that it becomes established and is to the satisfaction of residents.

“With regard to the claims that Mrs Thompson and Mrs Chaytor were mis-sold their properties, we have no record of any communications from either resident saying they felt they had been mis-sold over the landscaping following the works commencing on the area in November 2018.

“Any complaints of this nature are treated with the highest priority and are thoroughly investigated by our regional managing director so we will be discussing this matter further with MP Matt Vickers.”

Councillor Nigel Cooke, Cabinet Member for Regeneration and Housing at Stockton Council, said: “We’re aware of residents’ concerns about the condition of the landscaping at the Manor Gardens estate and are contacting the developer to make it very clear we expect them to put this right.

“We will not hesitate to take enforcement action if the developer does not carry out the work necessary to resolve this in a timely fashion. We will keep residents and local councillors informed.”