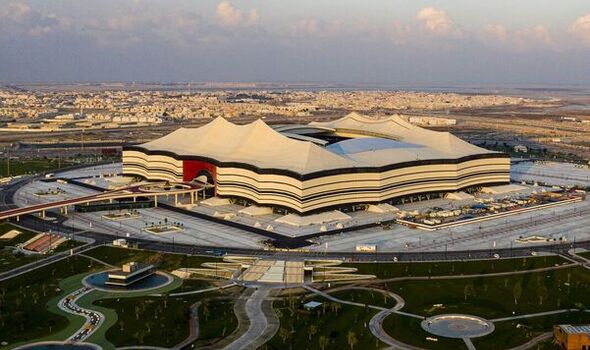 Football’s governing body, FIFA, has presented the tournament as about inclusivity and diversity. All are included and equal, no matter their gender, ethnicity, religion, or socio-economic status.

This is the public message of the 2022 World Cup in Qatar. But behind it lurks an altogether darker reality, in which the World Cup is alleged to be – quite literally – constructed on the foundations of thousands of dead migrant workers.

They are forced to work long hours, at high productivity, in exhausting and humid conditions, and then return to substandard accommodation.

What’s more, migrant workers often have their passports confiscated, and face huge recruitment fees, along with a state-run sponsorship system which binds each worker to a single employer.

The stadium where England played the USA, Al Bayt, is one of the projects that has faced significant criticism.

What did fans from both sides make of this? Express.co.uk asked some how they felt about the migrant workers who had died while building the Al Bayt Stadium.

Aaron Michaels from New Jersey said: “I feel horrible! No one expects to lose their life when they show up for work.

“I am glad to see that all this attention has improved the situation for migrant workers here, or at least it’s headed in that direction.”

The Qatari authorities have promised to deliver reforms related to the situation of migrant workers in the country.

But so far there has been a lot of talk about improving conditions, and limited action, leading to claims the World Cup is being used for “sports washing” the Gulf state’s poor reputation on human rights.

He added that he wasn’t sure “if they’re too scared to share what’s really going on or have things actually gotten better for them.”

Meanwhile, Christen Locke from New York said: “I wish Qatar would use this opportunity to respond to the backlash and give new worker protections like paid days off for exhaustion leave etc.”

At the same time, she thought this was just the unfortunate nature of things. “It feels horrible but par for the course for recent World Cups/Olympics. For instance, Brazil tearing down slums to build their biking courses.”

In response to the backlash, a spokesperson for FIFA said: “With the very stringent health and safety measures on site … the frequency of accidents on Fifa World Cup construction sites has been low when compared to other major construction projects around the world.”