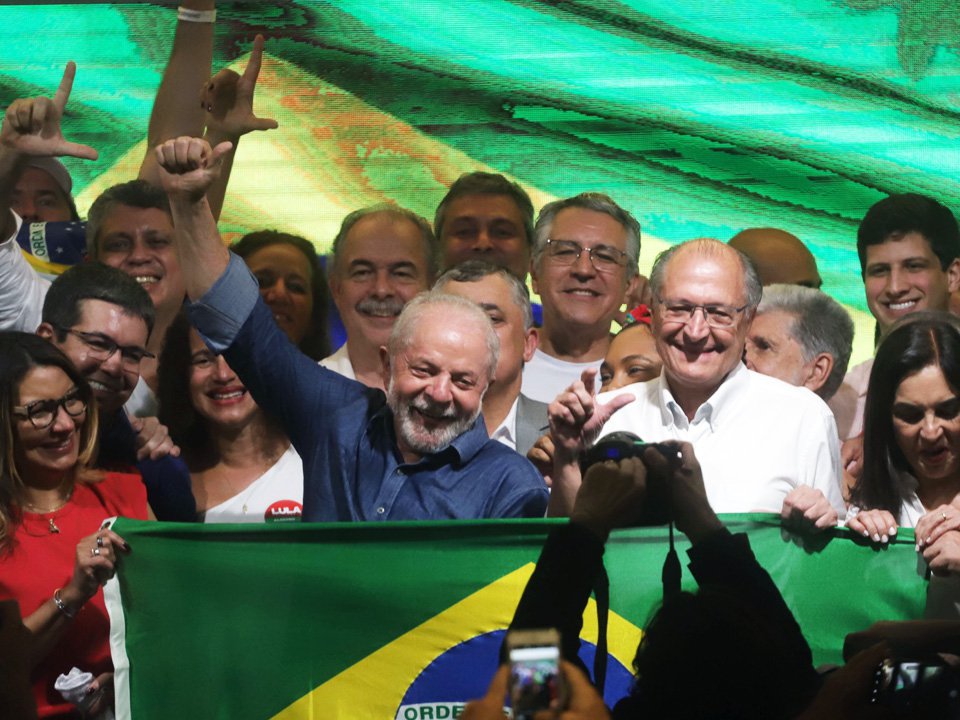 Mr Da Silva, known as Lula, received 50.9% of the vote and Mr Bolsonaro 49.1%, according to the country’s election authority.

It was a right victory, but led to big street celebrations, as well as disappointment for those who wanted to see the incumbent remain in power.

Yet hours after the results were in – and congratulations poured in from world leaders – Mr Bolsonaro had yet to publicly concede or react in any way.

Leftist Mr da Silva is himself a former president, who was extremely popular but was imprisoned for corruption after leaving office.

It meant he was sidelined him from the 2018 election won by Mr Bolsonaro, who has used the presidency to promote conservative social values while also overseeing destruction of the Amazon rainforest and testing democratic institutions.

Mr Bolsonaro’s campaign had made repeated – unproven – claims of possible electoral manipulation before the vote, raising fears that, if he lost, he would not accept defeat and try to challenge the results.

‘Today the only winner is the Brazilian people,’ Mr da Silva said in a speech on Sunday evening at a hotel in downtown Sao Paulo.

‘It’s the victory of a democratic movement that formed above political parties, personal interests and ideologies so that democracy came out victorious.’

Mr da Silva says he wants to bring in centrists and even some leaning to the right, and to restore the kind of prosperity the country enjoyed when he last served as president from 2003-2010.

Yet he faces a tough challenge ahead in a politically polarised society.

Mr Bolsonaro’s four years in office have been marked by conservatism and defence of traditional Christian values. He claimed that his rival’s return to power would usher in communism, legalised drugs, abortion and the persecution of churches – things that did not happen during Mr da Silva’s earlier eight years in office.

This was the country’s tightest election since its return to democracy in 1985, and the first time that a sitting president failed to win re-election.

Just over two million votes separated the two candidates; the previous closest race, in 2014, was decided by a margin of roughly 3.5 million votes.

Mr Bolsonaro had been leading throughout the first half of the count and, as soon as Mr da Silva overtook him, cars in Sao Paulo began honking their horns.

People in the streets of Rio de Janeiro’s Ipanema neighbourhood could be heard shouting, ‘It turned!’

Among world leaders offering congratulations was UK prime minister Rishi Sunak, who said: ‘I look forward to working together on the issues that matter to the UK and Brazil, from growing the global economy to protecting the planet’s natural resources and promoting democratic values.’

US President Joe Biden, who in a statement highlighted the country’s ‘free, fair, and credible elections’.

The European Union also commended the electoral authority for its effectiveness and transparency throughout the campaign.

Environmental groups also celebrated, taking the news as a positive sign for the global fight against environmental destruction and climate change.

Mr Bolsonaro’s administration has been widely criticised for its handling of the Covid-19 pandemic and the worst deforestation in the Amazon rainforest in 15 years.

But he is also remembered for his administration’s involvement in vast corruption revealed by sprawling investigations.

Mr da Silva was jailed for 580 days for corruption and money laundering. His convictions were later annulled by Brazil’s top court, which ruled the presiding judge had been biased and colluded with prosecutors. That enabled Mr da Silva to run for president for the sixth time.

Mr da Silva has pledged to boost spending on the poor, re-establish relationships with foreign governments and take bold action to eliminate illegal clear-cutting in the Amazon rainforest.

‘We will once again monitor and do surveillance in the Amazon. We will fight every illegal activity,’ Mr da Silva said in his speech.

‘At the same time, we will promote sustainable development of communities in the Amazon.’