BERLIN — Germany’s security services recorded more than 1,400 cases of suspected far-right extremism among soldiers, police officers and intelligence agents in the three years ending in March, according to a government report released Tuesday.

The report, compiled by the domestic intelligence service, is a first attempt to document the extent of far-right infiltration of the security services. It comes as the number of cases of extremists found in police forces and the military has multiplied.

Dozens of police officers have been suspended for joining far-right chat groups and sharing neo-Nazi propaganda. In June, the defense minister disbanded a whole company of Germany’s special forces after explosives, a machine gun and SS memorabilia were found on the property of a sergeant major.

Horst Seehofer, the German interior minister who presented the new report flanked by intelligence and police chiefs, said Tuesday that there should be “no tolerance” for extremists and that every case was “shameful.”

But Mr. Seehofer insisted that there was no “structural problem,” and said the vast majority of people in the security services were loyal to the German Constitution.

“We are dealing with a small number of cases,” he said. “The overwhelming majority of the employees at our security agencies — over 99 percent — are firmly rooted in our Constitution.”

The 98-page report, which covers a period beginning in January 2017, took a less sanguine tone. It said the real number of extremists was almost certainly higher than that reported and warned that even a relatively small number of highly trained officers who are radicalized constituted “a significant danger for the state and for society.”

Identifying extremists remains a “high priority” for the security service, the report said.

For years, German politicians and security chiefs rejected any suggestion that the security services had been infiltrated by the far right, acknowledging only “individual cases.” The idea of networks was routinely dismissed, and the superiors of those identified as extremists were protected. 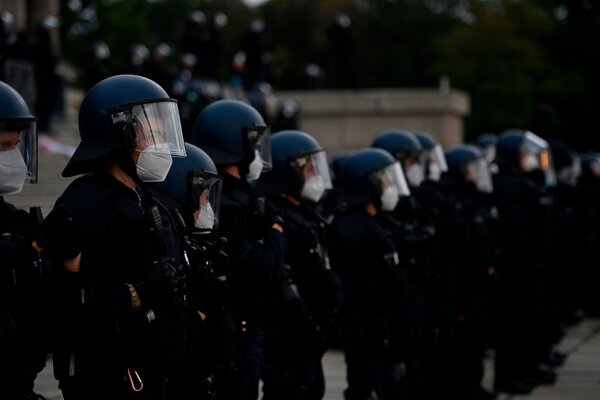 That has been changing.

Last month, the head of the military counterintelligence agency, Christof Gramm, was dismissed because the agency on his watch had repeatedly failed in its mission to monitor and detect extremism in the armed forces.

“We are getting away from ‘individual cases’ and are able to get an overview,” Thomas Haldenwang, the head of the domestic intelligence, said Tuesday. He said his agency would keep investigating “if we are facing networks of far-right extremists who are expanding their connections.”

Mr. Haldenwang, whose agency was founded after World War II and is known as the Office for the Protection of the Constitution, has warned that far-right extremism and terrorism constitute the biggest risk for Germany’s democracy today.

Over the past 15 months, Germany has witnessed three deadly terrorist attacks by far-right extremists. A regional politician was shot on his front porch, a synagogue was attacked and nine people of immigrant descent were shot.

Tuesday’s report compiled cases of extremism recorded by the state and federal police authorities, the intelligence services and, separately, by the armed forces.

Most cases by far — 1,069 — were reported by the military. In civilian law enforcement agencies, the report listed 377 cases.

The western state of Hesse, which was in the news after private data used in neo-Nazi death threats was traced back to a police computer, reported the biggest number of suspected extremists.

The report noted that the number of cases didn’t directly correspond to individuals, as a single individual can be involved in several cases and cases can involve several individuals. Some cases reported on Tuesday had already been dismissed after investigation or resolved, the report said.

The number of cases has continued to rise since data for the report was collected.

In Berlin, the police commissioner announced that 25 officers had participated in chats in which they likened Muslims to primates.

Mr. Seehofer, the interior minister, has resisted repeated calls to order a nationwide study on the prevalence of racism in the country’s police forces.