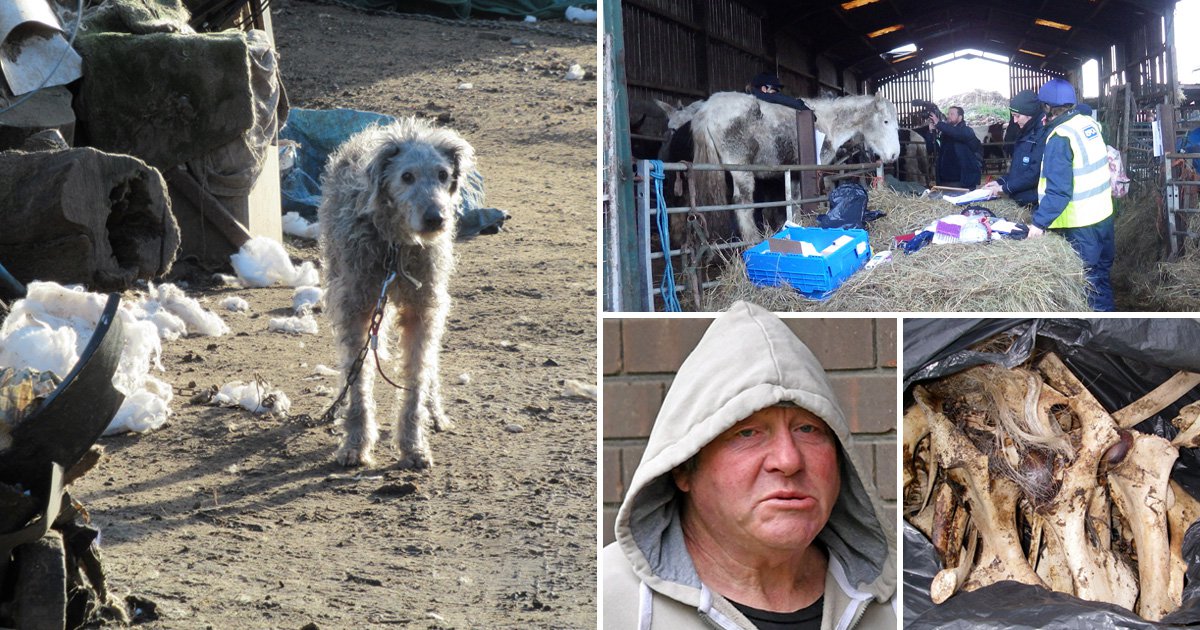 More than 200 animals had to be rescued from vile and ‘filthy’ conditions on a farm where they were left to stand in their own waste or with hazardous metal underfoot.

Farmer Geoffrey Bennett, 68, has been jailed after his premises was raided by police in January 2019.

In total, 22 animals ranging from horses to dogs either subsequently died or had to be put down, as they had been left in such poor conditions.

Among them were two starving ponies suffering with disease caused by parasites and a goat that was so ill it collapsed in its pen.

Officers found huge herds of ponies riddled with worms and living out in fields with dangerous metal on the ground and broken fencing sticking up from the thick mud at Hurst Farm in Ripley, Surrey.

Inside two barns on the farmland were pens filled with donkeys, goats, alpacas, and ponies squashed in together, standing on top of months worth of waste and faeces.

Many of the animals were skinny and had been suffering from underlying health conditions, the RSPCA said.

Dozens of dogs – some heavily pregnant and others with tiny puppies in tow – were found chained and tethered on the yard, while others were shut inside ‘tiny cramped cages’ and makeshift kennels.

After being rescued, several baby animals were born in care of the RSPCA, including 20 foals, six goat kids, one alpaca and nine puppies – but two puppies died and two ponies were stillborn.

A total of 204 animals were discovered at the site with 131 horses, 33 dogs, donkeys, two alpacas, goats, chickens, ducks and five birds all getting vet treatment.

Bennett admitted to failing to provide the stricken animals with enough nutritious food and not seeking treatment for them when they became ill.

He pleaded guilty to two Animal Welfare Act offences as well as six charges of failing to dispose of animal by-products after rescuers found bones and skeleton parts buried among the muck and wrapped in rugs.

At Guildford Crown Court Bennett was given a 19-week jail sentence and was disqualified from owning animals for life.

Sentencing Bennett, the judge took into account his guilty plea, age and health problems, but added that due to the severity of the crimes he had to be jailed.

As he sentenced him, Recorder Reed said: ‘They [the prison service] will show you responsibility and care many times greater than you showed the animals in your care.’

The mission was the largest of its kind and needed the help of a number of of vets and local charities.

PC Hollie Iribar from Surrey Police said the case was ‘one of the most difficult’ she had ever seen.

She added: ‘As a Rural and Wildlife Crime Officer for Surrey Police, I have witnessed some devastating acts of animal cruelty over the years.

‘This was one of the most difficult cases I’ve seen, and I am grateful to the RSPCA and our other partner agencies for the hard work put in to bring this case to trial.

‘I’m very glad that this heartbreaking case has seen a resolution in the courts, and that the animals involved were rescued and given a second chance at a happy and healthy life.’

RSPCA case officer Kirsty Withnall coordinated the rescue mission and led the investigation after receiving complaints about the farm.

She said: ‘This was a huge multi-agency rescue mission which was the culmination of weeks of planning and evidence gathering. In total, there were 100 staff from different agencies working on the case to help round up the animals.

‘It took almost 12 hours on the day to assess all of the animals, load them into horseboxes and animal ambulances, and move them off-site; making it one of the biggest coordinated rescue missions the UK has ever seen.

‘We had to have a plan in place that would allow us to remove a large number of animals on the day but we hoped that wouldn’t be necessary and had no idea what action would be taken until vets were able to assess all of the animals.’