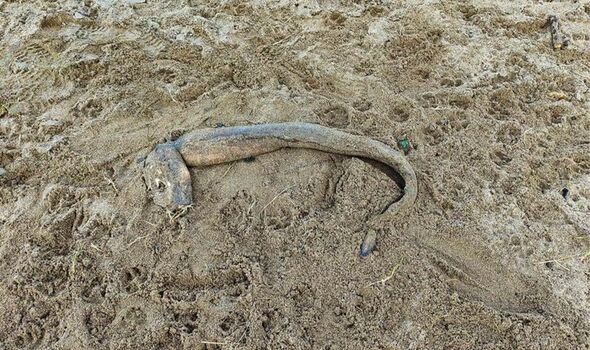 A unique discovery on a Cornish beach has sparked curiosity amongst locals as well as the general public.

The remains of a large sea creature, believed to be a conger eel, were found on Par Beach on Wednesday (January 4).

Conger eels are one of just two species of eels regularly caught by anglers in the UK and sightings of them washed up on beaches are rare, reports Cornwall Live. They are described as predators of the sea – hunting down any fish species it can find for food, including dead and rotting fish.

They also have a very unique look – with a long snake-like body and large eyes and lips. They also have extremely sharp teeth and scaleless skin like the one washed up near St Austell.

Due to spawning in the Atlantic Ocean, conger eels are much more common along the western and southern coast of the British Isles. The eel could have ended up on the beach as a result of natural causes or an angler landing it.

Conger move to very deep water and die after spawning. They can also attack humans, although such attacks are rare but not unheard of. Despite their large eyes they are also virtually blind and hunt by smell at night.

A larger eel, also believed to be a conger, washed up on Porth beach in 2019.

In July 2013 a diver was attacked by a conger eel in Killary Harbour, Ireland, at a depth of 25 metres. It bit a large chunk from his face but generally conger eels are believed to pose a minimal threat to humans.