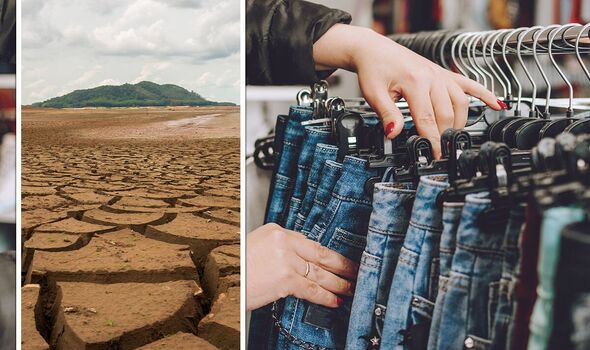 Fast Fashion brands have come under fire in recent years for the conditions workers are subject to in warehouses, low wages, long hours and their effect on the planet. But despite peddling promises of change, campaigners say “exploitation is stitched into the fabric” of the industry. George Harding Rolls, Campaign Manager at The Changing Markets Foundation said “someone is always paying the cost” for the cheap materials and quick turnaround we expect with fast fashion.

He said: “Our collective anxiety about the climate is extremely profitable for fashion companies if they can convince us that buying their clothes is a way to help, but the inconvenient truth for fashion brands is that buying new clothes is never going to protect the environment.

“So instead they greenwash, making vague, fluffy claims about their products being ‘environmentally friendly’, ‘responsible’, ‘conscious’ or ‘ready for the future’ as a way to sooth our guilty consciences.”

An investigation conducted by The Changing Markets Foundation found that 59 percent of green claims were “misleading or unsubstantiated”.

Mr Harding-Rolls added: “This placebo of action on sustainability can blind us to the true solutions we should be pushing for, such as better legislation and enforcement.”

Speaking on what needs to change Mr Harding-Rolls found said a “suite of rules” is needed to improve supply chains, cut clothing waste and reduce reliance on fossil fuels.

He added: “Companies which are really interested in making a difference should move beyond greenwashing their collections and instead advocate for policy change.

“The voluntary approach to sustainability has failed, and things will only get better when we change the rules of the game.”

And The World Bank Group says it is responsibility for 10 percent of global carbon emissions annually.

But it isn’t just down to the industry giants, Mr Harding-Rolls said consumers also need to change and refrain from “trend-led compulsive shopping”.

He said: “Consumers should start to see themselves as more than just ‘consumers’ and instead as active citizens, and use their voices to raise awareness on issues like fossil-fuel reliance, worker exploitation, and greenwashing.

“We should all refrain from trend-led compulsive shopping and buy only what you really need, preferably shop second-hand and buy for maximum durability, and seek to repair, reuse and swap items where possible. Wear what you already own, repair it when it breaks, and wear it again.”

According to The Business of Fashion, a third of young women in the UK think an item of clothing is “old” after they’re worn it once or twice, leading to a rise in fashion consumption.

A further one in seven young women said that being photographed twice in the same outfit is a major “fashion no-no”.