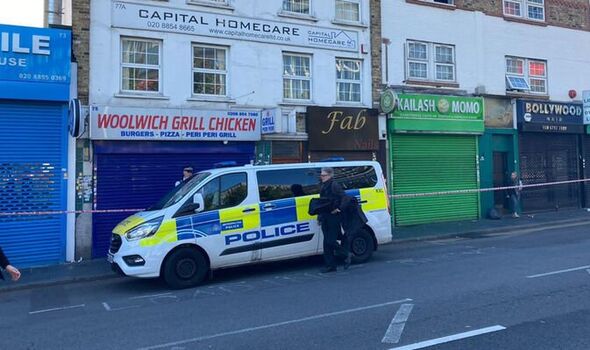 A young man has died after being stabbed in an area of London today compared to a “war zone”.

The 23-year-old was rushed to hospital after the attack near Woolwich, southeast London, but died of his injuries a short time later.

A cordon remains in place today as police investigate the death.

One woman, who lives on the busy street, told My London she now fears for the safety of her grandchildren in the capital.

A man, who works on a building site near the scene, described the area as “like living in a war zone.”

The construction worker, who has been staying in a hotel in the area for the last eight weeks for his job, described the location as “rough.”

He said it’s “very rough,” adding: “I see lads all the time with hoods and balaclavas riding round on bicycles. I just keep my head down and walk home.”

He added: “I’m from a nice area, This is all abnormal to me. When I go for a coffee on two occasions I’ve had violence, I had two homeless guy who I didn’t give a cigarette so they ended up getting in my face as if they wanted to fight.

“Then I had another guy who just went off…. Mega rough, it’s like a war zone round here. You can feel the tension – or maybe I can because I’m not from the area.”

Residents of the street where the man was stabbed to death have also described their fear of leaving the house after dark.

Speaking to MyLondon, residents said that they were afraid to walk around at night due to the level of violence in the area.

An elderly gentleman with a walking frame said: “I don’t come out at night as I’m too scared. I can’t run as fast as someone if they wanted to chase me.

Metropolitan Police says a Section 60 order, providing officers with additional search powers, has been put in place in the Woolwich area until 9.10am tomorrow on Thursday, September 29. Officers are in the process of informing his next of kin.

Anyone with information about the incident is asked to call 101, giving the reference 5568/29SEP. Information can also be provided to Crimestoppers, anonymously, on 0800 555 111.

A Section 60 order, providing officers with additional search powers, has been put in place in the Woolwich area until 9.10am this morning.