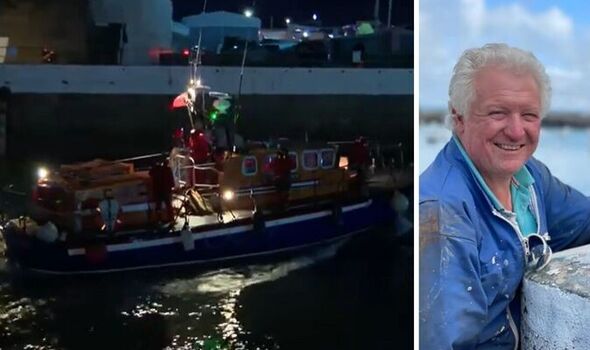 Harry and Meghan: People share their opinion on the royal couple

A major search operation has been called off overnight for three missing crewmen from a fishing boat that sank in the early hours off Jersey.

The three men onboard the 18-metre L’Ecume II fishing vessel have not been seen since it collided with a Condor Ferries’ freighter, the 124-foot Commodore Goodwill, at around 5.30am.

Spotter planes, helicopters and boats from the coastguard, RNLI and local fishermen all took part in the search for the men, one of whom has been named as skipper Michael ‘Mick’ Michieli.

Jersey Coastguard said it was suspending overnight search and rescue operations on the west coast of the Channel Island.

In a statement they said: “Search and rescue services will regroup before first light tomorrow to consider the findings of the search by the remote operation vehicle (the uncrewed underwater craft) before deciding how to proceed.

“Commercial shipping has been rerouted eastbound around the island to avoid the search area.”

Earlier a spokesperson for the coastguard had said debris from the fishing boat had been seen in the water and the L’Ecume II was thought to have sunk.

French naval aircraft and rescue helicopters from the Channel and North Sea Maritime Prefecture assisted with the search for survivors in a joint operation with their British counterparts. It’s understood five local fishing boats joined the search for their missing shipmates as well.

People commenting on the Jersey Evening Post Facebook page wished the search and rescue teams well and shared their hopes the crew would be found. One person described skipper Michael as a “lovely bloke” and said “massive thanks to all the volunteers that spent the day searching”.

Another commented: “So much tragedy this Christmas. It’s heart-breaking, praying for a miracle.”

ITV News reported a passenger on the Commodore Goodwill heard “five long blasts of the ships horn” and then a “big bang”. Freight driver Richard Henry praised the Condor’s response, saying the captain kept all onboard informed.

He told the news channel: “Even when the Goodwill boat turned around they had four or five big spotlights out. They were doing everything they could to find the people overboard.”

Condor Ferries said it would “fully comply with any investigation into the incident”.

Bill Sadler, Jersey’s Harbourmaster, Bill Sadler, gave an update this afternoon around 2.30pm as search efforts continued in the Channel.

He said: “The vessel is believed to have sunk in approximately 40 metres of water, which requires specialist divers.

“An offshore construction vessel currently working on the St Brieuc wind farm project will be coming with one of its remote-operated vehicles to confirm the location of the boat.

“Jersey Coastguard is continuing to coordinate the response, in conjunction with the States of Jersey Police, Government of Jersey, and other agencies.”

Anyone in Jersey who found debris from the L’Ecume II is being asked to report it to the Coastguard on 01534 447705.