An extremely fed up Nick Ferrari announced he has had “enough already” of Brexit, in an exasperated rant live on air. The LBC radio host argued there are other issues in the country failed to be “addressed”, listing off crime, schools, hospitals and the NHS. Mr Ferrari admitted: “I am there now I think. You know what, this is absolutely true, if I got a phone call this afternoon and there’s someone, supposedly one of my what’s called set up team, if they say to me, ‘they’ve actually said were going to say just to put an end to it’, okay fine. Fine. I feel very sorry for the 17.399million because now I’m out of the equation right, so I feel very sorry for the rest of you okay. But I’m through.

“I’m not saying we should Remain, I really don’t think we should, but enough already. Honestly, there’s so much else going on in this country that we are not addressing.

“Not least the people who are being stabbed and shot and the schools that are under performing and the hospitals that are not working, the NHS that is creaking at the seams. I give up! Enough! Right.

“I’ve reached the bloody point. I cannot go on and on any longer. Just bloody stay and we will move onto other things.”

The frustrated comments come as the UK faces another year of limbo, with European Union leaders on the verge of rejecting Theresa May’s plea for a new June 30 deadline and insisting instead on a 12-month extension on Article 50. 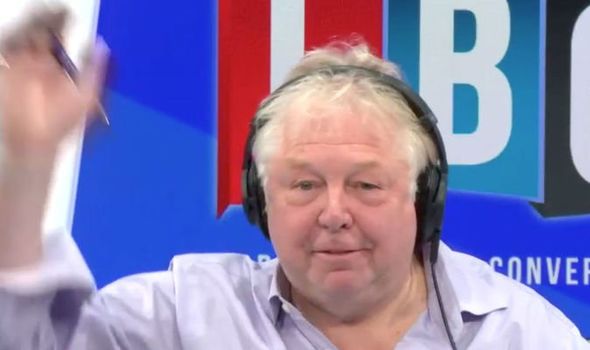 Honestly, there’s so much else going on in this country that we are not addressing

But European Council president Donald Tusk warned “neither side should be allowed to feel humiliated at any stage in this difficult process”.

In an appeal before tonight’s critical summit, he urged EU leaders to treat Britain with respect or risk poisoning future relations.

Instead, he called for a “flexible extension” lasting “as long as necessary and no longer than one year”.

Dutch Prime Minister Mark Rutte said in a tweet he had spoken to Mrs May ahead of tonight’s emergency European Council summit at which the bloc’s leaders will discuss a second delay to Brexit.

Mr Rutte gave no details of the conversation but said he was also due to talk with European Commission head Jean-Claude Juncker and Mr Tusk.

The unanimous agreement of all 27 remaining EU states is needed to avoid a no deal Brexit on at 11pm on Friday.

Mrs May will face the Commons for Prime Minister’s Questions at noon today before heading for Brussels where she is expected to meet Mr Tusk ahead of the summit.