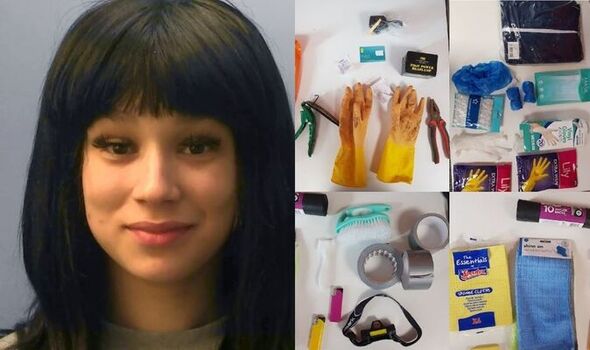 Sophie George, who was 18 at the time, was “consumed with revenge” when she put together a murder kit to kill Adam Yiosese in 2019 near her home in Brighton.

The bags were filled with bleach, duct tape, a stanley knife, forensic clothing, bin liners and lighter fuel which she took with her after arranging to meet Mr Yiosese at a nearby park.

During a search of her house, police found a “chilling” note on how she planned to kidnap and murder her victim.

The ‘murder plan’ nonchalantly reads: “Torture… walk him to site and kill and bury” and “turn off phone and track my iPhone”.

It also detailed plans on how she would change her identity and start a new life.

The revengeful teenager had asked her lover Mr Yiosese to drive towards Wild Park in Brighton before pulling a serrated knife on him and slashing at his hand as he tried to defend himself.

He managed to escape the van and call the emergency services before George attacked him savagely biting his finger to the bone and punching him.

Police arrived at the scene and initially handcuffed Mr Yiosese before discovering the ‘murder kit’ that she had carried with her in two plastic bags.

Officers later searched Ms George’s house and found the hand-written plan detailing how she would murder her victim.

The note included plans to force Mr Yiosese to walk to a grave she had dug and to torture him to reveal the names of other women he had slept with.

Applications to apply for a new passport and change her name were also found in the house.

Judge Christine Henson told her: “It seems from all I have read in this case, that you were fixated and consumed by revenge as you considered the victim had been seeing other women.

“You went to meticulous lengths to plan your attack. This was a highly planned attack. It is clear you knew what you were doing was wrong and your planning included evading responsibility and detection.”

The Judge said “the extreme nature” of George’s response was “completely abnormal” and she was deemed a “risk to those you believe has let you down”.

Ms Henson said: “Although it is an isolated incident it is deeply concerning and your ability to conceal it from those around you makes it all the more troubling”.

The court heard that the victim has suffered flashbacks and has difficulty trusting friends as he had trusted Sophie before learning of her plans.

Just 15 minutes before the hearing on Wednesday, the Judge was handed a written letter from Ms George in which she expressed remorse for her actions.

Defending, Graeme Wilson said that there had been an “imbalance” in their relationship, pointing to her youth and what he said was social isolation and a difficult home life.

Ms George, who is now 20 years old, initially denied two charges of attempted murder and being in possession of an offensive weapon but pleaded guilty in May last year.

She was sentenced to 13 and a half years in prison, of which she must serve at least two thirds in custody, with a four-year extended licence.