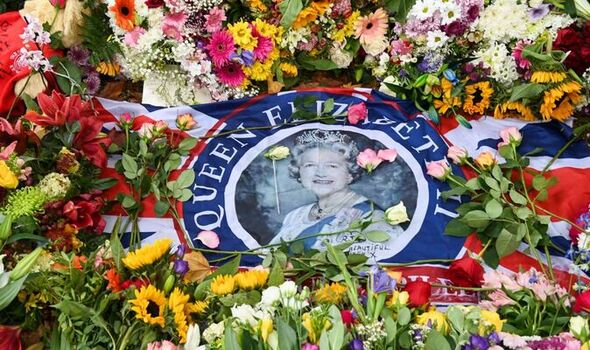 Queues snaked through Green Park, The Mall and St James’s Park, with people hoping to make it to the gates of Buckingham Palace to be part of history. Families erupted with joy as they saw King Charles III arriving at Buckingham Palace yesterday at lunchtime ahead of a meeting with representatives from Commonwealth nations.

Onlookers shouted “God Save The King” as the Royal car drove past, and a second car arriving around 30 minutes later, with Camilla, the Queen Consort, drew equal delight.

Families told the Daily Express how they wanted to enjoy the moment of history together, with many describing how they felt they “owed it” to Her Majesty after 70 years of selfless service and sacrifice to the nation.

And parents told how they wanted their children to witness such a significant moment in the nation’s history, with huge numbers of youngsters in attendance yesterday.

Some broke down in tears as they saw dozens of Paddington tributes to Queen, adding to the bouquets of flowers, cuddly toys, written tributes, candles and cards left near Buckingham Palace.

Paddington toy bears, teapots and marmalade sandwiches were left in tribute to the character’s role in the Queen’s jubilee when he was seen enjoying afternoon tea with Her Majesty. Many of the sandwiches carried the note “For later” or “For the journey”.

Many visitors said they believed it would mean everything to the late Queen to see the country coming together. 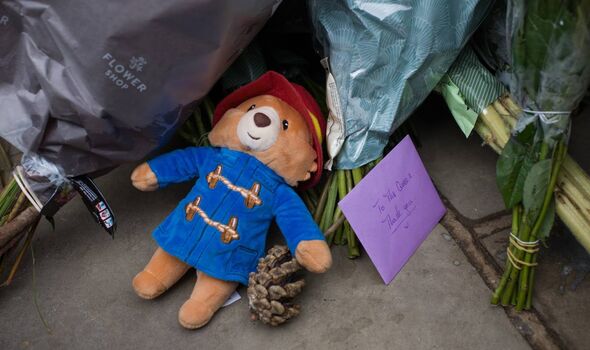 By 10am, the main paths from Green Park tube station were crammed with families – many with young children – heading towards Buckingham Palace.

In St James’s Park and Green Park, people snaked through the parks for hours. Numerous trees in both parks were covered with flowers, and bouquets surrounded a fountain within a stone’s throw of the Palace.

The Royal Parks have asked people to only leave organic or compostable material.

Every car that came or left the Palace sparked another rush of excitement, everyone craning their necks hoping to catch a glimpse of King Charles.

Everyone, desperate to catch a glimpse of history, lifted their camera phones into the air to capture their own view of history.

Crowds lining the length of The Mall – including children sat on top of parents’ shoulders – cheered and waved at the monarch as he was driven through the Palace gates, accompanied by a motorcade of four cars and four police motorbikes.

Kieran and Sarah Feethan set out from Stevenage, Hertfordshire, with their two children, Leo, eight and Bruce, five, at 7am yesterday.

Little Leo sat on his father’s shoulders waving a Union Jack as he looked at Buckingham Palace.

Kieran, 38, told the Daily Express outside Buckingham Palace: “It is history, live in the making for the kids and for the World.

“As a family we wanted to come and pay our respects. It’s not particularly somber. It’s a mixture of sadness and celebration. We’ve all come together. She meant everything to us. That was the Queen’s special ability.”

“It would mean the world to her, for the whole country to be here. Yesterday, William and Harry together. It’s always been her wish, for everyone to be together.”

“We’re planning to come down again for the funeral.”

The couple urged other parents to bring their children to “come down and experience it”.

Kieran added: “We got here at 9am. We went to see the flowers and then came around again.”

“We wanted to see the King and to soak everything up. People who have never met before are just chatting.”

“It’s been an amazing day. Everyone is here for the same reason.” 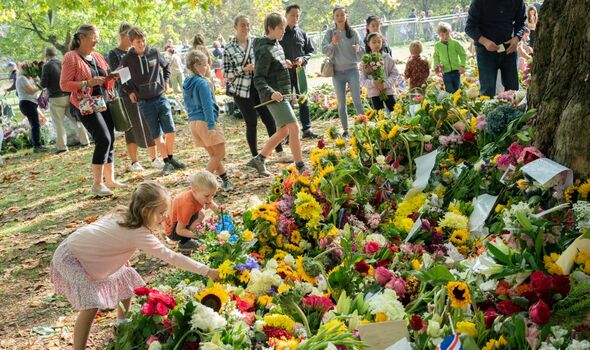 Wife Sarah added: “We felt like we had to come and pay our respects.”

Justine Moon, 39, from Watford, told how she, her husband Richard, son Bobby, 10 and daughter Demi, two, spent three hours queuing to get to the gates of Buckingham Palace.

Justine told the Daily Express: “We wanted to be part of this. We felt like we owe it to her. I think she was incredible. She devoted everything to the nation. She was the nation’s grandmother.”

“There’s a great sense of loss without her. This is history for our kids. To be part it is amazing.”

“I want to come to the funeral and to see the queen. I didn’t think it would be busy today.”

Vicky told the Daily Express: “We wanted to show our respect. I’ve always been a Royalist. I’ve still got my Princess Diana scrapbook.

“The number of people here shows how much respect and admiration there is for the Queen.

Claire added: “It’s amazing waking around, the amount of flowers, the number of small children, all the generations.”

Gill said: “It’s historic. There will never be one like her. It’s all we’ve ever known.

“And to think, I here’s going to be King after King, there will never be another Queen.”

Antonella Rizzo, 50, said it was “quite surreal” to see King Charles, adding it is something: “We will never forget.”

Mrs Rizzo, 50, went to Buckingham Palace with husband Rosario, 52, son Vito, 25 and daughter Marisa, 22, from their home in Worcestershire to witness the special occasion: “We thought coming down to pay our respects was the right thing to do.

It’s quite a surreal and emotional experience. It’s something we’ll never forget.

“It’s just everybody together. Everyone wants to come. You don’t know if you’re going to be here again.

“I don’t think we’ll see another Queen for a very long time.”