The announcement came as people gathered in the French city to honour the victims of Tuesday’s attack. 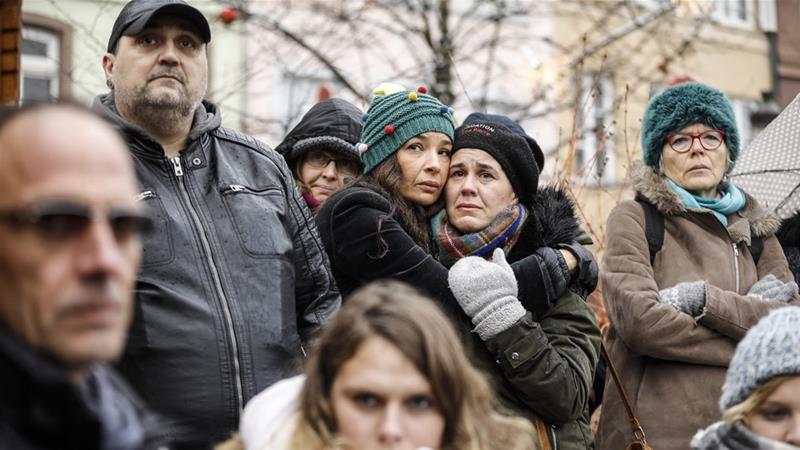 A fifth person wounded during an attack at a Christmas market in the French city of Strasbourg has died, according to authorities and relatives.

The prosecutor’s office confirmed on Sunday that Barto Pedro Orent-Niedzielski, a Polish national, had died after being injured by Cherif Chekatt in Tuesday’s attack.

“My brother Barto Pedro Orent-Niedzielski has just passed away. He thanks you for the love and strength you have given him,” Jakub, the brother of the 36-year-old victim from the Polish city of Katowice, wrote on Facebook.

Armed with a gun and knife, Chekatt, 29, attacked shoppers before being killed by police two days later following a manhunt.

Orent-Niedzielski and his Italian friend Antonio Megalizzi had tried to stop Chekatt from entering a bar during the assault, a close friend told AFP news agency.

Megalizzi, 28, died from his injuries on Friday.

Nicknamed “Bartek”, Orent-Niedzielski had lived in Strasbourg for 20 years, according to his friend.

Poland’s foreign ministry extended condolences to his family on Twitter.

Eleven people were injured in Tuesday’s attack, of which many remain in a critical condition.

The attack victims came from multiple countries; one of the dead was a tourist from Thailand. Another was an Italian journalist covering the European Parliament based in Strasbourg.

The news came as people gathered in Kleber Square in Strasbourg in a memorial to the victims of the attack.

According to the DNA newspaper, more than 1,000 people attended the hour-long ceremony, which ended with a minute of applause and a rendition of France’s national anthem “La Marseillaise”.

Mayor Roland Ries praised the city’s resilience in the face of hardship, saying the crowd in the Christmas market on the Saturday following the attack showed the city’s commitment to defending its values “on which our living together is based”.

An extensive manhunt for the attacker ended on Thursday night when the main suspect, Strasbourg-born Chekatt, was killed in an encounter with police in the city neighbourhood where he grew up.

Tuesday’s attack remains under investigation. The Paris prosecutor’s office said that two people who were close Chekatt were released from custody on Sunday “in the absence of incriminating elements at this stage”.

Only one of the seven people authorities detained while searching for Chekatt is still being held.

Chekatt’s parents and two of his brothers, who were held for questioning, were released on Saturday.