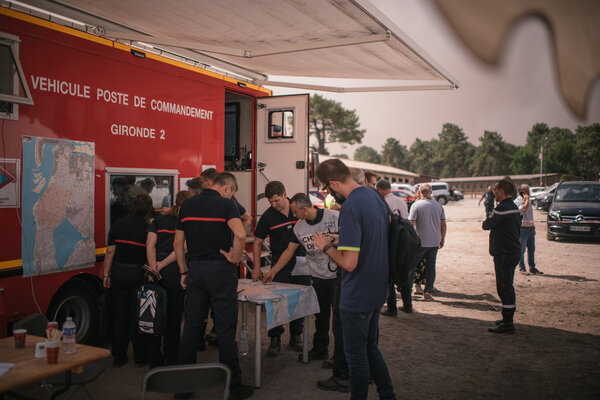 LA TESTE-DE-BUCH, France — More than 2,000 firefighters from around France were battling raging wildfires on Tuesday that have burned nearly 80 square miles of parched forest in the Gironde area of the country’s southwest and forced over 37,000 people to evacuate in the past week.

In the small town of La Teste-de-Buch, near the popular vacation destination of Arcachon Bay, a temporary firefighting headquarters was buzzing. Fire trucks raced and forth as helicopters and water-dropping planes flew overhead and officers reviewed color-coded maps of the flames.

While temperatures fell overnight as cool ocean air pushed the heat wave further to the northeast, the firefighters’ efforts have been hampered by strong gusts of wind, arid conditions and scorched trees that have sent burning embers through the air, further spreading the flames.

“The area happens to be a real powder keg,” he added.

The huge clouds of gray and red smoke that billowed from the fires had reached all the way to Bordeaux, about 30 miles northeast, on Tuesday. A burning smell lingered in the air there, and health authorities recommended that residents — especially vulnerable people, like those with respiratory ailments — stay inside and limit intense physical activity.