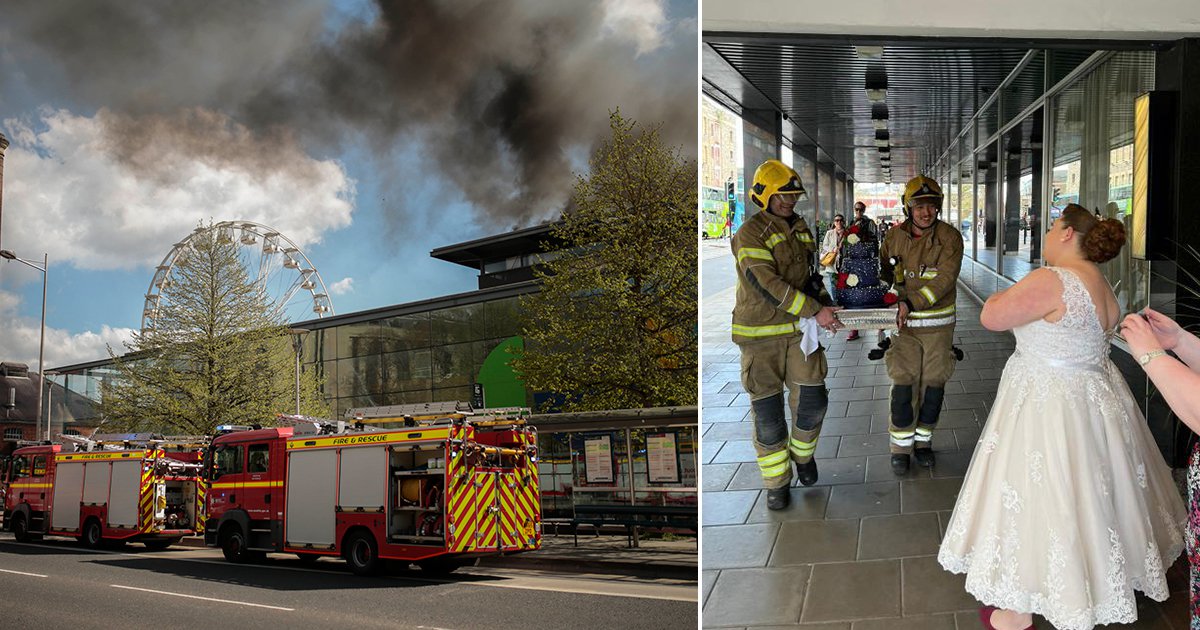 A groom had to evacuate his own wedding after a huge blaze ripped through the venue.

James Leggett was rushed out of We The Curious, a science and arts centre in Bristol, when thick plumes of smoke started to emerge from the roof.

His wife-to-be, Amy Heath, was just two minutes away in a hotel room when she heard the news.

The couple were eventually reunited on the streets of Bristol, instead of at the altar.

Both feared the worst for their belongings left inside the venue.

But a pair of beaming firefighters soon emerged from We The Curious with James and Amy’s three-tier wedding cake.

Sentimental photos which were laid out at the venue were also saved.

James, an HGV driver, told the emergency services: ‘Thank you so much for your guys’ efforts yesterday, the day was an absolute whirlwind of emotions and when we heard the pictures and the cake had been recovered, and then saw the firemen walk round the corner with it, was just indescribable.

The couple had originally planned to get married in August 2020, but the coronavirus pandemic delayed proceedings twice.

While the pair didn’t quite get the chance to officially say ‘I do’, they did celebrate in the nearby Bristol Hotel throughout the day and then in the Bristol Old Vic in the evening.

The bride’s sister, Kathryn Bradfield, told The Sun it was ‘the best ending to an otherwise weird and bonkers day’.

She added: ‘Her [Amy’s] beautiful dream wedding was literally burning before her eyes. Truly unbelievable.

‘I cannot express my sadness for Amy and James for not being able to say “I do”, but so proud of them both for making the best out of the s***test situation.’

‘We’d like to say a massive thank you to our incredible staff for their hard work and dedication, to our visitors for their understanding, and to the Avon Fire and Rescue team and police for their swift action.

‘We’d also like to say a big thanks to Bristol Hotel, SS Great Britain and Bristol Old Vic for supporting a wedding party that we had on Saturday.’