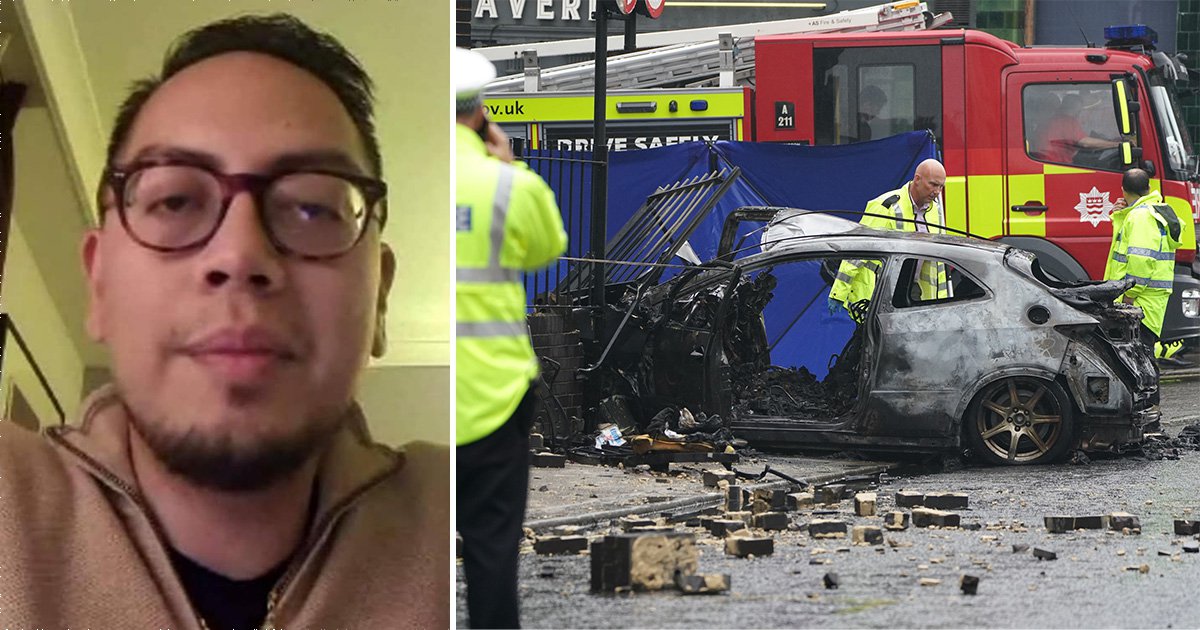 Three men who were killed when their car crashed and exploded into a fireball were on their way home from a club, friends have revealed.

One of those who died in the crash in Notting Hill at dawn on Tuesday has been named locally as handyman Jason De Belen, 36.

Mr De Belen was a passenger in the car travelling to his house in nearby Ladbroke Grove with a friend, the driver, and a barman from the club.

The pair were giving a lift to the third man who had just finished his shift in a central London nightclub and it is not clear if they were known to each other beforehand.

Witnesses said the car was travelling at around 90mph when it spun out of control over a bridge and slammed into a block of flats.

Photos from the scene showed the collision destroyed a brick wall and a railing while the wrecked car was left completely burnt out.

Nine people had to be evacuated from their flats as a precuation while all three men who were in the car died.

A friend told MailOnline: ‘Jason was a really warm-hearted, lovely guy. He was a family-orientated man who doted on his nine-year-old niece.

‘It’s an awful tragedy but details of what happened exactly are quite scarce at the moment.’

They added: ‘Jason’s family and friends are devastated as you can imagine. He’ll be missed so much.’

People living near to the crash site attempted to help the men in the minutes after the collision, according to witnesses.

Several neighbours described hearing a man’s pleas for help from inside the vehicle before rescue efforts had to be abandoned as the flames took hold.

Mr De Belen’s aunt, Estrella Hernandez, said his death had come as a double blow to the family as an uncle had also died recently in the Philippines.

Writing on Facebook, Ms Hernandez said: ‘Our whole family is deeply saddened and grieving by the loss of our two loved ones.

‘My brother Efren Garcia who suffered from illness and my nephew Jason Garcia De Belen who died in a car accident in Notting Hill London.

‘It is so painful for our whole family to lose them during these hard times. Our failure to glance our nephew in person brings us too much sorrow and pain, not bidding him goodbye in his resting place.’

Met Police collision investigators are investigating the circumstances around the crash and inquests for the three victims are expected to begin imminently.