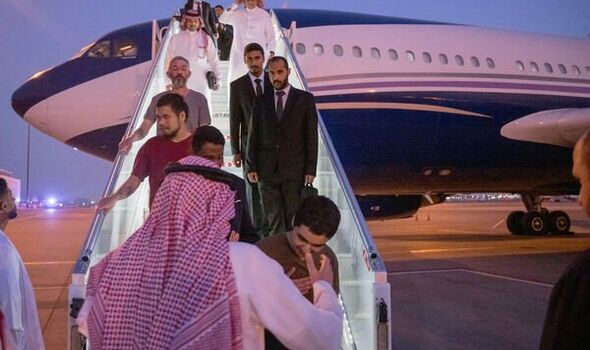 They were freed by their Russian captors after being taken prisoner while fighting for Ukraine in the Donbas region.

The Prime Minister said it ended “months of uncertainty and suffering for them and their families”.

The hostages, including Aiden Aslin, who was facing execution, are now on their way home after Saudi Crown Prince Mohammed bin Salman negotiated their release with Vladimir Putin.

Mr Aslin, 28, from Newark, Nottinghamshire, was captured fighting for the Ukrainian armed forces in Mariupol in April. His overjoyed mum Angela said she was “so emotional and over the moon” at the news.

Russia falsely claimed he was a mercenary and sentenced him to death after a sham trial.

He was paraded on Russian TV and even made to sing the country’s national anthem.

But Ukraine insisted he was entitled to protection under the Geneva Convention as he had been a resident of the country since 2018.

Foreign Secretary James Cleverly said the release came too late for British aid volunteer Paul Urey, 45, who died this year while being detained by Russian-backed separatists in Ukraine.

Alongside the Britons, others freed come from the US, Sweden, Croatia and Morocco. They landed in Saudi Arabia.