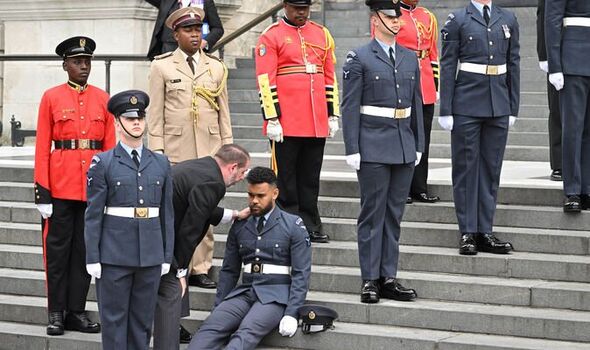 The men, in full military uniforms, slumped to the ground after the 72F (22C) heat got the better of them. Nearby colleagues maintained their composure while others rushed to help. St John Ambulance confirmed they treated the soldiers for heat-related incidents. A spokeswoman said: “Our volunteers treated five military personnel as part of our planned military response.”

A member of the Royal Air Force, who was part of the military guard of honour, fainted but was able to get to his feet.

Crowds cheered when he was helped up and led away.

Minutes later, a second collapsed and was also able to leave on foot.

Another was pictured being pulled upright while Foreign Secretary Liz Truss entered the cathedral. A Royal Marine was believed to have passed out too.

Service men and women have often fainted at high-profile events after succumbing to heat, dehydration or tiredness after spending hours standing bolt upright.

In 2019 and 2017, several guards passed out during Trooping the Colour.