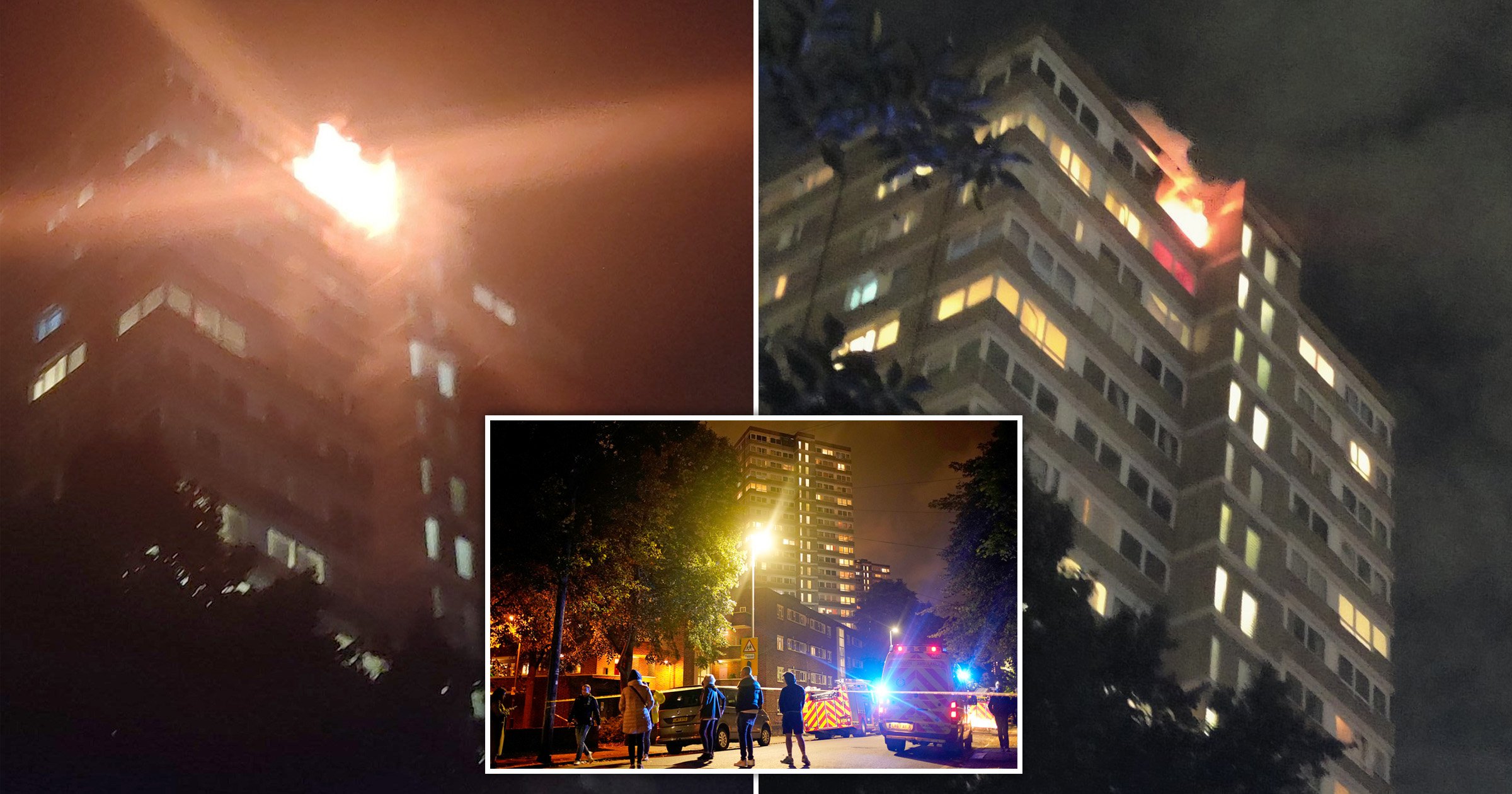 A teenager suffered burns to his arms and stomach after a can of deodorant got to close to a candle – causing an explosion that destroyed his family’s south London flat.

Atrin Behazadi, 13, was in his room on Tuesday evening when the deodorant he was using got too close to a naked flame, causing the blast at around 8pm.

His sister, Atis, 15, called 999 and the pair fled the flat on the top floor of the 20-storey block on Westbridge Road in Battersea as dozens of other families living in the building did the same.

Ten fire engines and 70 firefighters rushed to the scene to tackle the flames which engulfed the flat but were able to have the blaze under control in around an hour.

‘Both windows exploded and the door was blown off its hinges. It was broken in half.

‘My daughter was the one who called 999 and told them about the fire.

‘I went to do a quick shop when my daughter Atis called me and said, ‘Mum, something exploded’.

‘My son, Atrin, was spraying himself with deodorant in his room and it hit a tea light candle.’

She said was very proud of her daughter for acting ‘so quickly’ and saving ‘so many lives.’

‘The paramedics told my son to wrap himself in a blanket so he wouldn’t go into shock.

‘They both went downstairs but I was already in the lift so when I got there, they weren’t there. I thought that was it, it was done, something had happened.

‘He’s okay now, but the doctors have told me to keep an eye on him in case he gets a fever.

‘The smoke alarm in the apartment didn’t work and there aren’t any in the corridors,’ she added.

Atis, 15, said: ‘I was in my room and suddenly my door burst open. I saw a bright light from the flame and heard him scream.

‘I was paralysed for a few seconds but then he burst into my room. He said his body was burning and that we needed to get out.

‘The fire calmed down, but there was still a flame on the cabinet. I wanted to put it out but there was glass all over the floor.

Fifty people were evacuated from the tower block on Tuesday night.

Images from the scene and shared on social media showed large flames coming from the flat and lighting up the sky. Debris could also be seen falling to the ground.

Firefighters who brought the blaze under control said the flames covered almost 80% of the property.

Around 50 people fled the building with many saying no alarms went off and there were no fire extinguishers available.

Speaking to MailOnline, Charlie Masson-Smith a spokesperson for Wandsworth Council said this was because extinguishers could encourage people living in the building to fight a fire themselves.

He said alarms were not needed in communal areas ‘because that’s not where fires happen’ and none of the council’s buildings had fire alarms or extinguishers.

‘All these buildings are designed to confine the fire to one single dwelling. The building’s safety features did exactly what they were supposed to do.’

He said it was best to stay put in the event of a fire to minimise the chance of colliding with a firefighter coming up the block’s stairs.

He said the building had fire exits and the council supplied smoke detectors.

He said five flats were affected by the fire and the council had offered them alternative accommodation.

A statement from Wandsworth Council on general fire safety measures in the housing it provides said: ‘Fire extinguishers are not provided in the communal areas of the building. We cannot, and would not, expect residents to fight fires.’

Firefighters from Battersea, Fulham, north Kensington and Wandsworth all attended the incident.

London Fire Brigade advise people in a block of flats ‘to stay put’ unless their flat is affected by smoke or fire.

It said: ‘This is based on the fire protection provided in the building and the walls and doors of each flat. ‘This has been the case for many decades and although fires in flats happen every day they rarely spread beyond the flat on fire.

‘When you stay put, you reduce the risk of entering a smoky corridor and being overcome by smoke. Staying put also means firefighters can tackle the fire safely and quickly without being delayed by many residents evacuating down the stairways.’