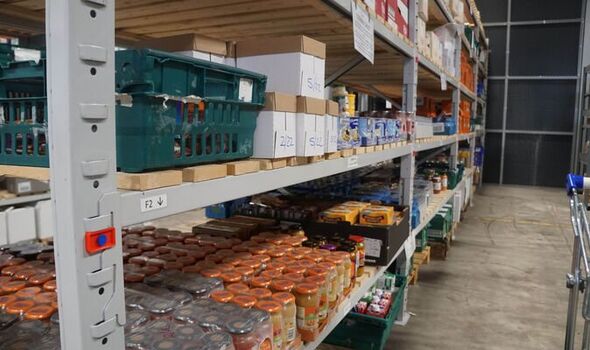 Almost all food banks (99 percent) have seen a surge in demand since the start of the year, according to community-giving platform Neighbourly and Aldi – which work together to distribute surplus food from the supermarket’s stores. An estimated one in three people who are going to the banks had never needed them before.

As levels of poverty, destitution and hunger rise at an alarming rate, the Independent Food Aid Network (IFAN) wrote to the Prime Minister and Chancellor in desperate need of support.

The group, which represents food aid providers across the UK, including more than 550 independent food banks, wrote: “We are deeply concerned about the scale of suffering that we are already witnessing, as well as our capacity to prevent people from going hungry in the weeks and months to come.

“An emergency supply of food cannot resolve someone’s financial crisis and will only act as a temporary sticking plaster.

“Measures must be urgently introduced to decisively increase people’s incomes through the social security system and wage increases combined with job security.”

The food banks are urging the Government to increase benefits by at least eight percent, in line with inflation.

They also want the removal of the five-week wait for Universal Credit and for crisis cash payments to be readily available.

Sabine Goodwin, who wrote the letter on behalf of IFAN, is also asking that wage rises match the cost of living.

The Daily Express spoke to charities, food banks and community causes to find out how they’re coping. Ms Goodwin, coordinator of IFAN, said: “Food banks in our network are facing an impossible situation.

“They are struggling to support more and more people unable to afford food while their capacity is reduced due to lack of donations and volunteers.

“The answer is clearly not unsustainable charitable food aid provision but to ensure people have enough income to survive through adequate social security payments, wages and job security.

“We’re urging the Government to address the UK’s deepening poverty crisis and to stop hunger from happening in the first place.”

Andrew Forsey, national director of Feeding Britain, said: “Our country’s last line of defence against destitution is at risk of being overrun. With hard-up Brits feeling the pinch, the queue for Feeding Britain’s help is lengthening each week. Those in the queue have had to unplug fridges and freezers, stop using heating and hot water, and take home larger amounts of food from our projects in a desperate attempt to keep a roof over their head.”

Orla Delargy from Sustain: the alliance for better food and farming, said: “Colleagues working in food banks are warning about the huge increase in need. But food banks can
only do so much and cannot resolve the financial crisis that many of their users present with.

“They should only ever be seen as a sticking plaster, not as a solution to poverty.” Food banks reported an average rise in demand of 31 percent for their services so far this year, according to the Neighbourly and Aldi survey.

This is expected to rise to 35 percent in the next three months as higher energy bills and the increase in National Insurance contributions add to
the pressure.

Steve Butterworth, from Neighbourly, said: “During what is a hard time for everyone, anything people can do to give back in the coming weeks will make all the difference.”

There is a saying, “Charity begins at home”, but there was a time when it didn’t have to.

The rise and rise of food banks should shame us all. They are a direct result of choices made by governments over the last 12 years, and if we want to see an end to them, this country needs a change of direction.

I recently visited St Martin’s Church Community Shop and Food Bank, in Hull. I am proud of the people who give their time and effort to run schemes like St Martin’s.

But I am not proud a country like ours needs them.

Archbishop Desmond Tutu, a friend of Hull, once said: “There comes a point where we need to stop pulling people out of the river. We need to go upstream and find out why they’re falling in.”

The team at St Martin’s explained to me that they are seeing more people on zero-hour contracts who are not getting enough hours to make ends meet but are not entitled to Universal Credit.

We can change this country for the better, but to do it we need a government with the desire to go upstream, find out why its people are falling in and have the courage to do what is needed to prevent it. Not one content to leave it to those with compassion to pull the drowning from the waters.

• Emma Hardy is the Labour MP

She said: “We are watching the numbers shoot up again. A lot more working people are attending as they are finding it the hardest.

“The demand is crippling us.

“It is so hard to watch people breaking down in tears because they are struggling so much.”

Ms Hudson said some days the food bank is forced to close its doors as they run out of food.

And without further funding, Ms Hudson fears the food bank may have to close for good.

She also fears for the wellbeing of people in food poverty.

Ms Hudson said: “We are going to see suicides, murders, domestic violence and child deaths increase from all of this.”